Some Surprises Found in an Imperial Photo Album

Collectors of British books are familiar with the red-covered souvenir photo albums produced during the reign of the then-current monarch. Easiest to find are the "Royal" Albums; less common are the "Imperial" Albums, produced back in the day when Britain still had an empire. So, I was very pleased to find the following offered by an auction house a few years ago: 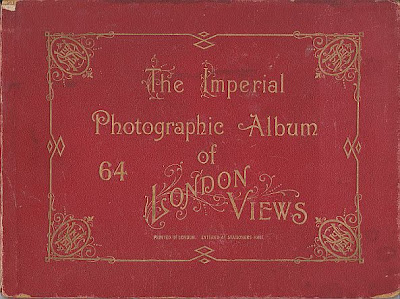 When involved with any auction, always set a limit that you will pay for any item, and stick to that limit, no matter what. It's all too easy to catch "auction fever" and get carried away, bidding more than you want, sometimes more than you can afford; and always be sure to check what the auction commission will be, and include that in your limit. 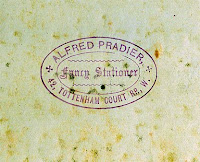 To the right is the imprint of the stationer from the inside front cover. Such imprints are not always present, but they enhance the experience of ownership, especially for the Anglophile seeking "atmosphere." In this case, the imprint is of Alfred Pradier, who leased the shop at 42, Tottenham Court Rd on 27 November 1895, for £450; in 1910, he was still there but shared the premises with a photographer named Attilio Lapparini. This is important in dating the book. We can also use internal clues from the pictures, such from the page reproduced below. 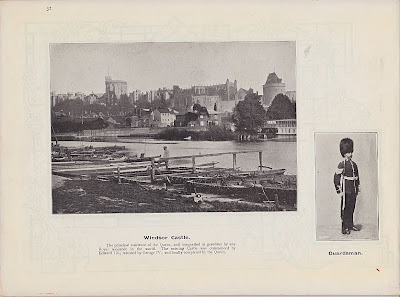 This is a photo of Windsor Castle, and the caption informs us that it is the residence of Her Majesty when in London. The only person who could have been on the throne is Queen Victoria, who reigned 20 June 1837 through 22 January 1901. After her came two Edwards and two Georges; then the present Queen Elizabeth II, but by the time she ascended to the throne, the British Empire had become a Commonwealth. So the book was published between 1895 and 1900. A range of five years is not bad for an undated book. 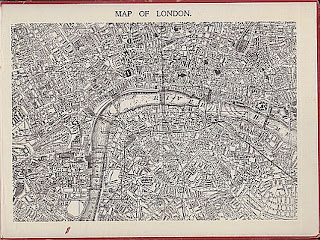 The inside back cover of the book has a nice map of Central London. It is a great piece of cartography for the map enthusiast, and its detail is typical for craftsmen of the period. The book is a collection of 64 photographs, showing most of the standard points of interest in Central London and the West End.
Now, as you may have inferred from the blog's title, the book was not my only acquisition that day, as I discovered when I opened the book. Evidently this book formerly belonged to a person who cared about the rulers of the realm for I found...

A photograph of the funeral of Edward VII (Victoria's son) on 20 May 1910, a somber Friday, marking the end of a reign all too short; his mother would have been surprised at what an able ruler he proved to be.


And, also a news clipping marking the Silver Jubilee of Queen Elizabeth II, as well as a newspaper clipping showing the Queen Mum. 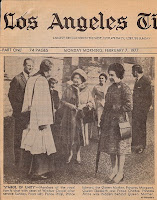 ﻿The Queen Mum (Queen Mother) was, of course, Queen Elizabeth, widow of George VI and mother of Queen Elizabeth II. She was much loved by the British people, and her death in 2002 was a time of great mourning. She and her husband, who guided Britain through the turbulent years of WW2, recently re-entered the public consciousness due to the recent very fine film The King's Speech, starring Colin Firth as the king who had to overcome a serious speech impediment so he could adequately and confidently speak for a nation going to war. 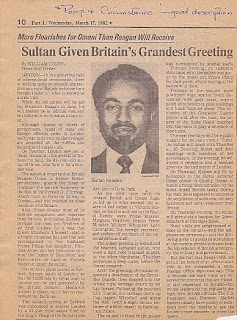 Another item of note found within the pages of the book is a clipping showing the Sultan of Oman during his visit to England to celebrate the Silver Jubilee of Queen Elizabeth II, and was given a grand reception. Sultan Qaboos bin Said, who deposed his paranoiac father in 1970, was able to repay the British Queen 34 years later, when she paid a State visit to Oman, with a celebration that was grand in every way.
The book was a treasure trove of photographs and newspaper clippings. According to the auction statement, the book was part of an estate in Beverly Hills. When attending an auction, always arrive early so you have a chance to properly view the items, as that will help you set your limits. I have to admit, though, that I did not get a chance to view it ahead of time, and so set my limit based solely on the book alone.
Sometimes, you just get lucky...
Posted by Ralph E. Vaughan at 20:45