People are appalled when I tell them my first real job paid $1.10/hour. I had had jobs prior to stuffing tacos for Taco Bell, but they really don't count. Mostly, they were day labor jobs or temporary gigs for specific tasks, such as one night inventorying LPs (remember them?) at White Front or doing odd jobs for the manager at Char-Burger. Even my summer job between high school and college doesn't count, since as a Fuller Brush Man (Boy, really, since I was 17) I earned, not an hourly wage, but a percentage of sales. As low as it seems today, the $1.10/hr I received from Taco Bell was the most money I had ever earned, and I got lunch and dinner free. I was able to pay my way through college, but more importantly I was able to buy books...isn't that really why we all work?

Back in those days, you could buy a sack of tacos and still get change from your dollar bill. I thought it was the end of civilization as we knew it when Ron, manager of Taco Bell #17, told me we were raising the price of a taco from 13 cents to 15 cents. "Who's going to pay that much for a taco?" I cried. Well, as it turned out, anyone who wanted a taco would pay that much. And if you didn't want a taco you could always get two pieces of chicken and a biscuit for less than a dollar, or two hot dogs and fries from Wienerschnitzel, around the corner from us, for about four bits. At the time the gas I put in the car was 17 cents/gallon (though once it dropped to 13 cents, but that was during a gas war, the kind that did not involve the Middle East), so earning $1.10/hr was not nearly as bad as it might seem today.

But back to books. At the time, some paperback books had increased their cover price to 35 cents, but most of the books in the racks (remember those revolving racks in newsstands and drug stores?) were still only a quarter. And comic books were still 12 cents, though there were rumblings of a change to 15 cents...yes, the end of civilization as we know it. The digest detective and science fiction magazines were 40-50 cents, but that was only a monthly expense. And it was still possible to get paperbacks, magazines and comics for only a nickle or a dime at used book stores.

So, there I was, earning $1.10/hr, no longer dependent upon the largess of my parents, who really didn't approve of me reading so much anyway. With my minimum wage pittance, I could get nine comic books, or three 35-cent books, or four quarter books, or a magazine and two books, or...well, you get the idea. I had $1.10 in my pocket, and I was in book-lover's heaven.

Fast forward to modern times. With $1.10 in my pocket, there really isn't much I can do anymore. With the demise of the "dollar menu" at fast food places (which cost more than a dollar anyway) I would starve. I could get a digest magazine, if I had four more dollars, not that there is much to choose from...there were more than a couple of dozen then, only five now. You can't get a paperback for less than $9.99, for the most part, and books don't even fit in the old spinner racks anymore...they're as hard to find as bookstores these days. And comic books? Don't get me started.

But, you may argue, times changes. Prices may have gone up, but so have wages. Your current minimum wage worker can buy one magazine or two comic books (maybe), but must forget about that paperback until he's worked another hour. To get all that I could before, I'd need a job that paid at least $40/hr. Good luck on that. I'm glad that I kept most of my old books (darn that garage sale my mother held!) and bought books on the cheap when I could. Now that I'm retired, money is scarce, but I have plenty of time to read. That investment has paid a handsome dividend...unlike tacos, books don't have expiration dates. 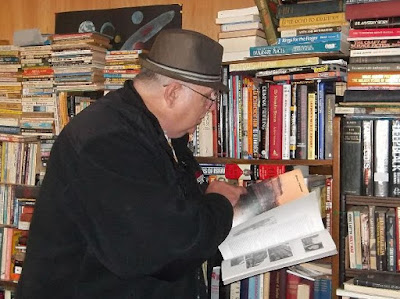