For those of you following the Paws & Claws saga, you'll be glad (or chagrined) to learn that Dogs of S.T.E.A.M., fifth book in the series, is available, both in print and e-book formats. Rather than tell you about the story, I wanted to share something about how the book came into being.

Back in 2012, I wrote Paws & Claws: A Three Dog Mystery, first book in what was to become a series. At the time, however, I had no real intention of writing more about Levi, Sunny, Yoda and the Three Dog Detective Agency. It was something I had discussed often with Levi, and something I had put off for one reason or another. After writing and, ultimately, publishing it, I decided I did not want to let it end there. As I often did with short stories, I sat down and wrote a dozen or so titles which I thought might lend themselves to stories. The first book was based on true events (yes, even the spider money), but my fidelity to real events decreased with each succeeding book. The second (Flight of Raptors) was more fact than not; the third (K-9 Blues) was maybe 50/50; and the fourth (The Death & Life of an American Dog) was quite a bit more fiction than fact, though I always included real places, real dogs and cats, and illustrated the books with photographs rather than drawings. With the fifth book, which because of the title had to include steampunk, Victorian London, time travel and alternate universes, I realized I would have to reply more on fiction than actual events. After all, my dogs have never traveled into the past, journeyed into alternate dimensions or saved the British Empire...as far as I know. They don't tell me everything. Be that as it may, I still wanted to illustrate the book with photos, use real Chula Vista-area locales, and include some of the animals that fans e-mailed me, a group I call "animals of character." I had four animals of character to work into the story to greater or lesser degrees. 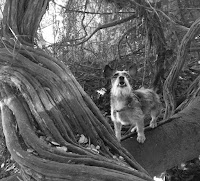 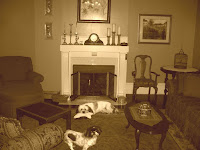 The first of these was June (r), a dog nominated by artist Jason Thompson. I was taken when I saw his picture of his little hunter up a tree. The only real change I had to make was to take out the leash which kept her from running after her heart's desire. It was a fairly easy matter. With Kelsey (l-front) and Sammy (l-rear), two Shih Tzu dogs nominated by Mike and Jenny Meyers, it was a little more complicated. I had two separate photos of the dogs which I needed to combine into a single photo. Since, within the plot, one of the Dogs of S.T.E.A.M. is drawn to their home because it resembles the dog's own Victorian Age, I took the two dogs and put them into a more appropriate setting. To make it look a little more authentic, I turned it into a sepia tone (for the e-book edition only) to give it the appearance of  being a daguerreotype. All in all, I think both photos work well in their own ways. The fourth dog was a Gordon Setter named Artemus Gordon (thanks to Lester Doyle), but because his appearance became much more than a cameo, and he was present at some of the events also represented by photos, I decided to forgo the usual photo of him. 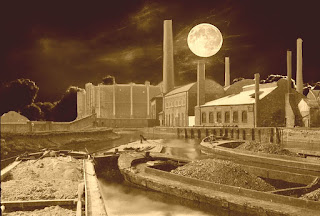 This is the first book in the series where I used locales in addition to Chula Vista. I also included scenes set in South San Diego and in Otay, an unincorporated area a little south of Chula Vista. In addition to contemporary locations, however, some of the action took place in London of 1887, one of which was the London Gasworks, where the Dogs of S.T.E.A.M. raid one of the secret lairs of the sinister and nefarious Lord Cerberus, a dog like no other on Earth. For the photo above, I combined a photo of the Gasworks with two others, a full moon and a night sky. Using a graphics program called GIMP, I filled the canals with mist, painted moonlight on some portions of the complex, and deepened some of the shadows. Lastly, I gave it a sepia cast (e-book edition) to make it seem more like an actual period photo.

This was the first book in the series to have two different covers, one for print and one for Kindle. The print edition uses a photo manipulated in GIMP. I inserted two dogs (the one wearing goggles was itself edited) into a public domain photo of London. I liked the photo, except it had a big boat in the background, which was not only distracting but had nothing to do with the story. I took it out. Change the composite photo to sepia tone again, and Bob's your uncle. For Kindle edition, I used the same photo, but cropped it to a vertical format using a graphics program called Irfan. For the actual composition of the crop, I have to thank the Wife, who provided aesthetic advice. Recently I discovered a design website called Canva,com, a great resource if you are working on a book cover, an album cover, a poster or even a Facebook banner and have a working budget to $0.00. I used their layout tools to size the photo, then their typography section to add author, title and series number. It addition to a lot of free stuff, it has a learning curve that is mostly flat, and even has design education segments for those who need tutelage in the subject. I recently used the site to redo the cover of the short story The Dog Who Loved Sherlock Holmes. The original cover is on the left, the re-done one on the right. I think it a big improvement.

Of course, the real question about Dogs of S.T.E.A.M. is:

"How did you come up with such a wild story? How did you plot a tale about some canine detectives from Chula Vista getting involved with a group of steampunk dogs from Victorian London, who then battle Lord Cerberus and his herald Lilith, not only for the fate of London and the British Empire, but for the destiny of myriad timelines, including ours?"

Actually, that was the easy part. I just wrote down everything the characters did and said. Yep, easy.