It's a phrase that's become something of an eye-roller..."back in the day." As soon as some character in a film, television episode or book says it, the viewer or reader knows what's coming, a double-barreled blast of nostalgia and condemnation. The speaker waxes a little teary-eyed at some activity or object in the ancient past (or so today's young swine think of it), lamenting its loss, then damning the present age and castigating those who played a role (or simply stood by) in the loss of whatever is being lamented.  The phrase seems to have replaced "Back in my day..." and for obvious reasons. By substituting the impersonal "the" for "my" we no longer make a personal claim to the time being remembered, no longer explicitly admit to be old(er), and it's something even a thirty-something girl can say when viewing the results of unfettered progress. I have to admit, I rarely say it when I look at the state of the world, for the future always brings change and all change is bad, but it occasionally slips out when I consider small press publishing.

I had always written on the fringe of the small press, even when I first tried to interest editors in my short stories, though, back then they were listed in Writer's Market and The Writer's Handbook as "little" or "literary" magazines. I tried the big magazines as well, but I thought I might stand a better chance with the smaller markets. Mostly, no matter the circulation of the magazine, I garnered rejection slips, but the sting was often lessened by a personal note or a suggestion for improvement by an editor. Most things improve over time, and I put my writing in that category, for I was not so willful or arrogant to think my writing then was as good as it was every going to get. Unlike some starting writers, I was under no illusion that I was God's gift to literature. I took everything to heart, sometimes too much so, for an editor is only human (something I did not fully realize until I became one), but I did manage to improve, one story at a time. 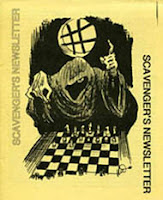 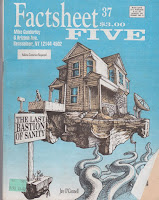 I wrote a few novels in the Seventies and Eighties, but, fortunately, none of them ever saw print. Besides, I was much more at home with the short story format, enjoyed reading short stories, and could write one in a reasonable amount of time. When I came upon the Small Press as a thriving cottage industry in the Eighties I mostly put away the big writers market books and picked up smaller monthly publications like Scavenger's Newsletter, Gila Queen's Guide to Markets and Factsheet Five. The first two publications were very much oriented to the genres of science fiction, fantasy and horror, though sometimes an odd mystery magazine would sneak through the door. It was with Factsheet Five, however, I learned that genre publications were only the tip of the iceberg in the "zine" universe, that there were zines for every kind of writing, interest and outlook. Up to that time, I had written a short story every week or two, and though I continued to do that for another twenty years, I now had more zines than ever to submit to, more than I could ever hope to write for. I was a frequent patron of the post office, which was right across the street from us; I gave a large portion of my earnings back to the USPS, which should have endeared me to them, but I think that after a while they came to dread my visits almost as much as the mailman dreaded delivering my mail...it was quite heavy 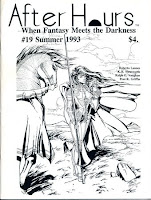 As you might have surmised by now, it was all print and snail mail. No computers back then, no email or digital magazines, no electronic submissions. I went through reams of paper, cartons of envelopes and rolls of stamps. It may sound now like an expensive nightmare, but at the time it was an expensive dream, and a quite rewarding one, though of course not rewarding in any way that would put food on the table. There was a thrill in getting a magazine with my story in it, when the editor remembered to send it. Sometimes it was a very narrow window of publication, as with magazines that small and short funded, the first issue could easily be the last, and often was. In the Small Press, a magazine that published more once was the literary equivalent of an Old China Hand.

Everything has changed since then. Monthly market newsletters have gone the way of the magazines and journals they used to publicize. Trees are mostly safe from the actions of editors and prolific writers since magazines and anthologies are aimed at the burgeoning Kindle/Nook market, though sometimes a POD print edition is produced for contributors, No editor wants anything to come through the mail anymore. Small e-zine editors want everything via e-mail now and even the big fiction magazines (now almost as rare as dodos) have their own systems for electronic submissions. No waiting for the mailman...excuse me, letter carrier any more, just a little notice via Yahoo or Gmail...Dear Author, Thanks but no thanks...

Writers don't even need editors anymore, or even publications in which to hone their talents. Now they can go to places like Kindle Direct Publishing, SmashWords or Google Play, publish their unedited and unpolished prose, and really believe they are indeed God's gift to literature, no matter what others may say. I've been told that things are a lot better now because publishing has been fully democratized and millions of trees are no longer being sacrificed on the altar of the writer's craft. All that may be true, that much has been gained, but I think much more has been lost.