Like many people my age (sorry, it's classified) I first encountered the colorful character of Simon Templar, known as The Saint, in the form of actor George Sanders, who played The Saint in several big-screen films, though in that particular series from RKO he was preceded by Louis Hayward and followed by Hugh Sinclair. At the time, I had no idea they were based on books, but perhaps I can be forgiven since most of them were not really based on books at all, but were original stories based on the character of The Saint, also known as the Robin Hood of Crime. It took me awhile to figure out just who The Saint was...not a detective, not a gangster, certainly not a policeman. He was hated and feared by hoods, was obviously an enemy of evil and crime, and though it was apparent he was not trusted by the police there was at least a grudging admiration from some of them, especially his counterfoils in the NYPD and Scotland Yard. Eventually, I figured out he was Sherlock Holmes, the Scarlet Pimpernel, Robin Hood and Bulldog Drummond, all rolled into one suave, and dangerous, package.

But, even I, who first saw The Saint as George Sanders, really think of The Saint as Roger Moore, star of the long-running and still very popular television show. So identified did Moore become with the character that when he replaced Sean Connery as James Bond, I was probably not the only person who asked, "Why is Simon Templar calling himself 007?" But, of course, The Saint is not George Sanders or Roger Moore or, for that matter, perhaps not even Simon Templar. He is, in fact, a fabulous figure from the imagination of Leslie Charteris, a Chinese-English writer who was born as Leslie Bowyer-Yin in 1907, son of a Chinese doctor and an English mother, a racial combination that caused him much trouble in the United States because of the Oriental Exclusion Act, which denied US immigration and residency to anyone with 50% or more Oriental blood. His name change by deed-poll in 1926 was more to do with the commercial world of writing, but it can't be denied that most people imagined that Leslie Charteris (after a notorious gambler, rogue and con artist of the 18th Century) was every bit as English as Simon Templar. Just as Charteris was not who people thought he was, Simon Templar was also more than he seemed to be...he called himself Simon Templar, but at various times he called himself other "ST" names, such as Sebastian Toombs and Sugarman Treacle. Indeed, why "The Saint"? Perhaps from his initials, perhaps from the haloed stick figure he left at his "crimes," perhaps because he saw himself in a war against the "ungodly." As with many aspects of The Saint, it is a mystery.

In the 1960s, as I was discovering the exploits of The Saint on television, I found The Saint in print, both in book form (at Pickwick Books) and in magazine (at the Third Avenue Newsstand). The magazine was quite entertaining to a young mind, as it not only featured adventures of The Saint, but work of other writers as well. The magazine, however, ceased publication in 1967, after 141 issues. The books in paperback continued, spurred by the popularity of the television series, both in its original run and in syndication when it ended in 1969. The character of The Saint remained quite popular, even if the jaunty style of the books started to become dated, so much so that another television series, The Return of The Saint, debuted in 1978 and ran for two years with the dapper Ian Ogilvy in the lead. I suppose it would be appropriate to say a word here about the 1997 Val Kilmer film called The Saint, so I will: Rubbish! The film was terrible, was horribly acted, contained nothing of The Saint or his world as conceived by his creator, did not have a plot, and the only thing it accomplished was to send potential readers running away from the books, as fast as possible.

Over the years, I've managed to build a fairly complete collection of The Saint in hardcover and paperback, in various editions from different publishers. I've found that they're not difficult to find, especially in this brave new digital age when readers don't have to rely on advertisements in the backs of cheesy magazines or the luck of getting on a bookseller's snail-mail list. However, these days you don't have to settle for foxed and sometimes brittle copies, as The Saint has found new life in print and e-format, proof that not even a film as bad as The Saint can kill off a character as colorful and captivating as The Saint. The new editions are coming from two fronts, one an established British firm, the other a controversial American upstart. 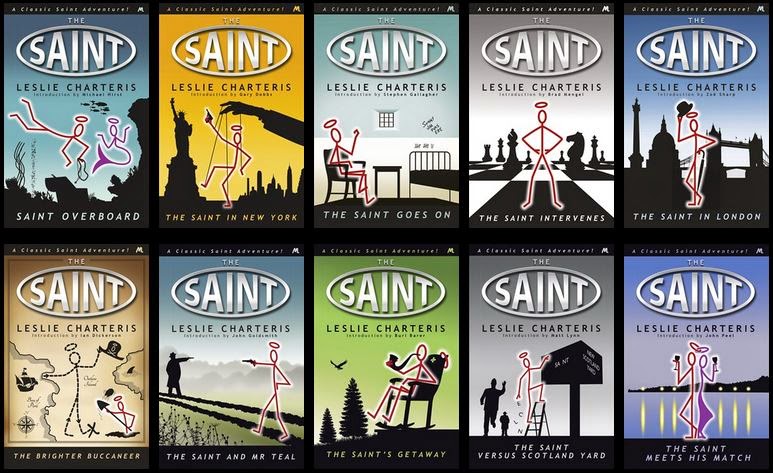 First up, we have Mulholland Books, an imprint of longtime Charteris publisher Hodder & Stoughton. The goal was to bring all The Saint books back into print for a new generation of readers, and as you can see in the graphic to the left, they are handsome editions, with new covers with a touch of art deco retro and incorporating the famous little stick figure that has always been a part of The Saint's adventures. According to the Leslie Charteris site, they are being brought out in both print and e-book editions. 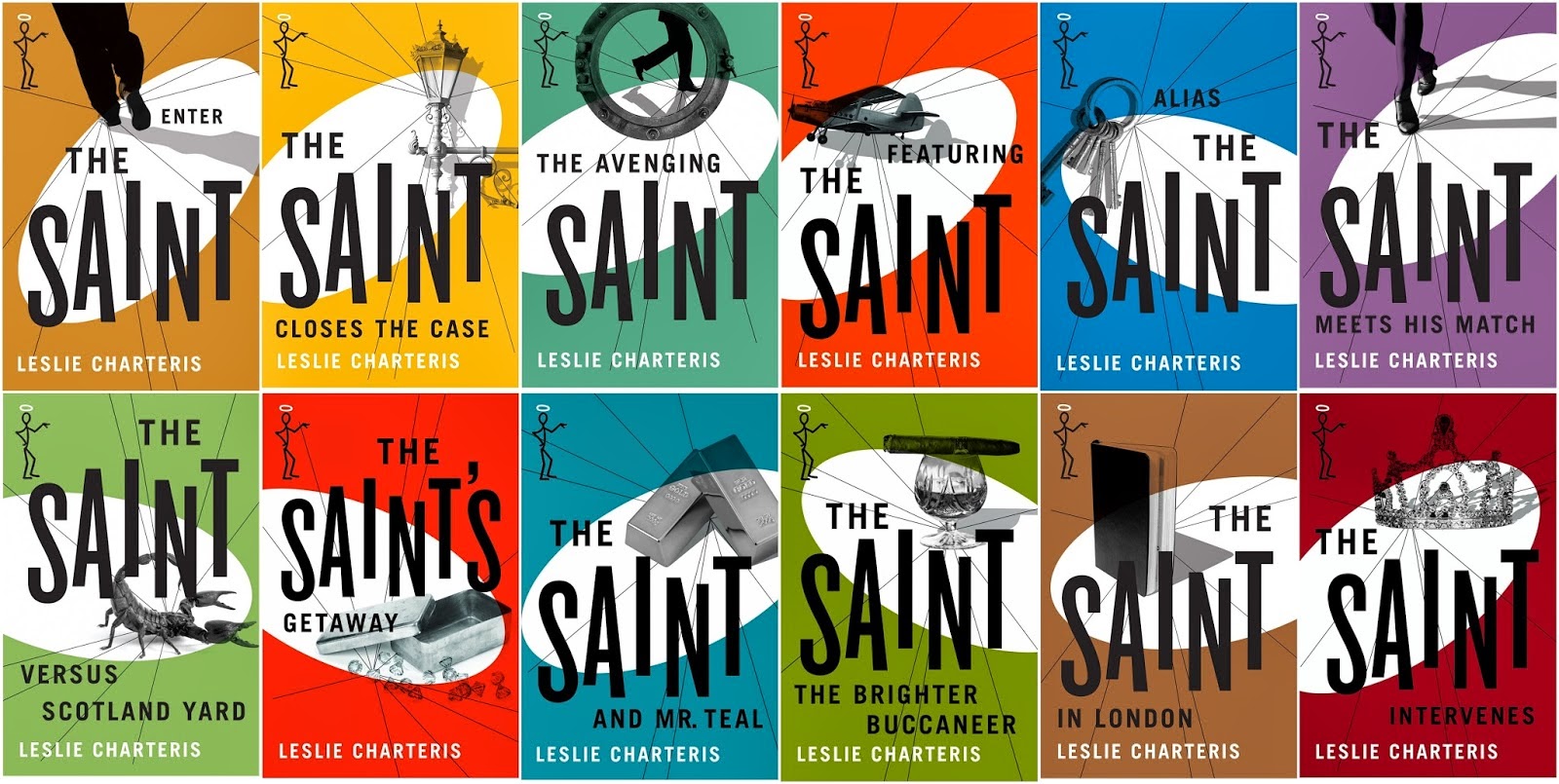 The second publisher of Leslie Charteris' The Saint books is Thomas & Mercer. Haven't heard of that particular company? It's an imprint of Amazon Publishing, and is named for two streets that intersect near the company's headquarters. Since the imprint is yet another head sprouting from the Amazon Hydra, some people don't consider it a legitimate publisher, but it is bringing out new work from established and rising star writers, as well as bringing back into print out-of-print books like The Saint series. And even though we're talking about Amazon, which immediately brings to mind visions of e-books and Kindle, the new editions will be offered in trade print editions as well. All in all, things look pretty good for The Saint, both for those reading about him for the first time and those who want new reading editions to augment their collection of fragile vintage editions, now preserved on shelves or in polybags.