Beginning with his first appearance in the book Fer-de-Lance (1934), portly Nero Wolfe has proven himself America's greatest detective. Fans of Ellery Queen, Perry Mason, Harry Bosch or Spencer will likely disagree, but I stand by my declaration. I also look to Nero Wolfe as being the source of my fondness for beer. Wolfe's first recorded words are, "Where's the beer?" Since this is more along the lines of a memoir, those seeking detailed biographical and analytical musings are referred to the excellent Trivia and Treasures from Rex Stout's Nero Wolfe Detective Stories by H.M. O'Shaughnessy. 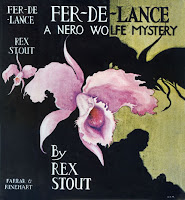 I came late in life to the Nero Wolfe mysteries, and even later to the pleasures of beer. Both are surprising to people who know me. I've read mystery stories all my life, and was a great fan of the Ellery Queen series, even though I admit to being confused early on about whether EQ was a writer, a detective, a real person or an editor (I was an avid reader of Ellery Queen's Mystery Magazine); I was no less confused when I found out he was actually two cousins, but I eventually worked it out. I think that one of the things that put me off initially with the Nero Wolfe tales is that they are told through the prism of Archie Goodwin, Wolfe's employee who does all the legwork, chases down all the clues and rounds up all the suspects. He is glib (oftimes too much so) and has the nearly unbelievable talent of  remembering and relating the exact conversations of five or more people in a group, a skill even more valuable to readers than to Wolfe himself. Once I was able to suspend my disbelief of Archie Goodwin I was able to approach Nero Wolfe. And then I was hooked. 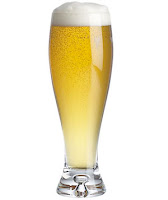 My lateness in developing a fondness for the taste of beer (the very cornerstone of civilization) is a bit less understandable to some people. After all, did I not spend six years in the United States Army? The charge is quite true -- sandwiched between learning spycraft and being a military photojournalist I was in the infantry, we all know how soldiers are; to top it off, for a period of time I was stationed in Germany -- beer central! While it's true I tasted beer over there, including a local brew called Hasenbrau ("Rabbit Beer" though a couple Germans of my acquaintance called it "Hasen-piss"), I just never developed  a taste, either for beer or the harder liquor that my fellow dogfaces imbibed on a (too) regular basis. After I came back to Nero Wolfe with new appreciation, I gave beer another chance. 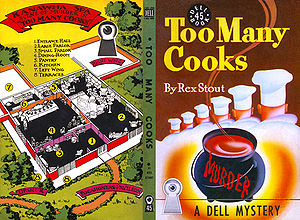 Nero Wolfe is a gourmet, and for some people that makes his predilection for beer noteworthy, and a little mysterious. After all, wine is the beverage of the upper class, as well as the snotty people who want to be thought of as upper-crusters. I discovered that although Wolfe was very knowledgeable  about wine, he did not drink it, except, sometimes, a nice brandy that he sipped while eating Fritz's (his chef) apple pie; I don't really like wine, not since that unfortunate situation at the Fort Campbell Officers Club...best forgotten...and hard to recall, if you get my meaning, which is a good reason for avoiding wine, even during communion. 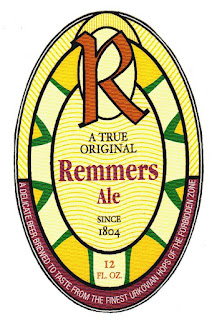 As I trekked through one Wolfe mystery novel after another (my re-introduction to the world of Nero Wolfe consisted of a bulk acquisition of nearly the entire series) I came across myriad references to his beer drinking habits -- always out of a glass, never a bottle; use of a gold-plated bottle opener to removed the caps; the beer poured into the glass in such a way to create just the correct amount of foam, which is allowed to drop to a specific level; and the storage of bottle caps in his top desk drawer so he can accurately track his daily and weekly imbibing. And to Wolfe's favorite beer -- Remmers. Often, Wolfe would be presented with a variety of beers, invariably ending up with Remmers. The brewery founded by Wilhelm Remmer in Bremmen, Germany, exported beer to the United States until the advent of the Great War; after the cessation of hostilities on 11 November 1918, exportation resumed, the company was bought by Beck & Co., but the name was retained. Unfortunately, it's not a brew I've tasted, though I do have my favorites -- MGD, Red Trolley, Bass, Karl Strauss Oktoberfest, Killians, Guinness, Sam Adams (various), Anchor Steam and Pabst. And let's not forget Romulan Ale.

There are some people who claim there is no such thing as Romulan Ale, but, you know, those are the same people who think Star Trek is fictional. Now you may think it a bit of a reach to go from Nero Wolfe to Star Trek, but not really. Had I not rediscovered the sheer brilliance of Nero Wolfe, I probably would not have discovered the great taste of beer, and though I would likely ended up in Star Trek: The Experience at the Las Vegas Hilton, I would not have found myself sitting before a "Morn's Sampler" listening to a fan sitting at the nearby counter of Quark's Bar & Restaurant trying to ask a cute little Vulcan girl (yeah, it's the ears) out on a date...yes, there are Trekkies, and then there are real Trekkies. 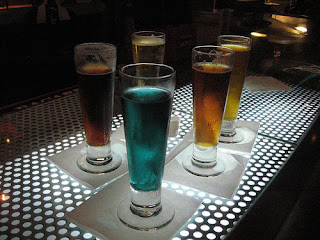 "Morn's Sampler" is a collection of five beers based upon the worlds and races of Star Trek: Klingon Blood Draft, Romulan Ale, Trixian Bubble Draft, Dominion Lager and Obsidian Dark...it's a lot of beer, certainly not for the faint-hearted. I must admit, however, that even the Sampler paled in comparison to the Wife's beverage of choice -- the Warp Core Breach (for two or more: "Order this drink and prepare to separate your saucer section."). We were at the time celebrating our natal days, and spent four straight days in the 24th Century, leaving only at closing time to take the monorail (the Borg-themed car of course) back to the Sahara to sleep and read and listen to the swing music of Harry Barlow in the lounge...I had brought Edgar Wallace's Scotland Yard, an E. Phillips Oppenheim tome, and three Nero Wolfe novels. I don't know if  Wolfe would have liked Romulan Ale (smuggling it across the Neutral Zone between Nevada and California can be hazardous), though I think he would have liked Obsidian Dark, but favored Dominion Lager. 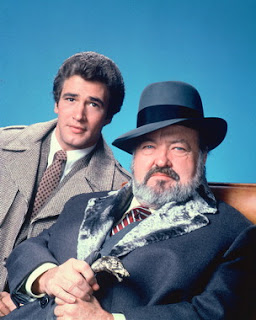 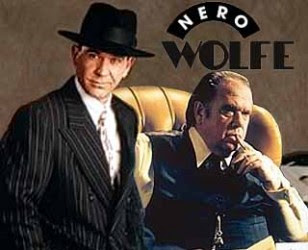 Several films were made in 1930s, but they are considered minor efforts. Nero Wolfe has also appeared on the small screen twice, both good interpretations in their own right. The first was in 1981 (NBC) and starred William Conrad, with Lee Horsley as Archie Goodwin, and was set in modern-day New York City; in 2001-2001, A&E mounted a handsome production with Maury Chaykin as Wolfe and Timothy Hutton (whose father played Ellery Queen) as Goodwin, set in a New York City vaguely in the 1950s. The A&E series had better production values and was actually based on author Rex Stout's books, whereas the NBC series merely had the characters. Another thing the A&E series had which the NBC series lacked: that wonderful gold-plated beer opener.

As good as the series might have been, they are not the books, and the books are where Nero Wolfe and Archie Goodwin truly live. And where they will always dwell, for both men are citizens of the country of mind. 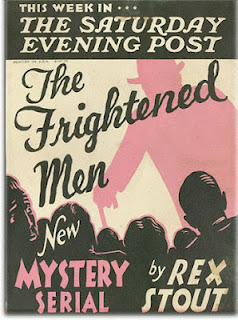 One last comment about my involvement with Nero Wolfe: my children (especially the Kidette) wish I had never ever read a Nero Wolfe book. I insisted they become HTRs (Human Tape Recorders) and relate to me the exact words spoken by friends, family, acquaintances and strangers. When they protested that it was not humanly possible to do what I asked, I always told them the same thing: "If Archie Goodwin can do it, so can you." I can't imagine why they were so keen to move out.
Posted by Ralph E. Vaughan at 23:21