There's Something About Honey 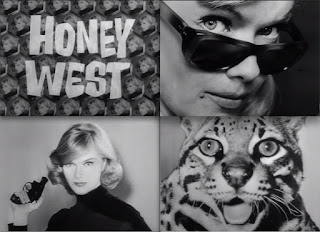 Honey West was one of the first female private eyes to grace the small screen, and she was one of my first celebrity heartthrobs. Looking back, it's difficult to say which made a bigger impression on my young mind, Honey West or the imported Emma Peel of The Avengers. Fortunately, since one is domestic and the other foreign, I can say it's a toss-up, just like I don't have to choose which car was cooler, Honey's Shelby Cobra Convertible or Emma's Lotus Elan. Since they were both black belts in Karate, either one could have been my bodyguard. On the other hand, Honey did have a pet Ocelot, and how cool was that? Honey West did have an advantage with me that Emma Peel did not, in that she was initially a literary character, and for a book person that is always something to consider. Also, Anne Francis, who played Honey West, also had an advantage (with me) that Diana Rigg did not--I was already smitten with her from Forbidden Planet (she almost upstaged Robby), and we shared a birthday...always go with a Virgo. 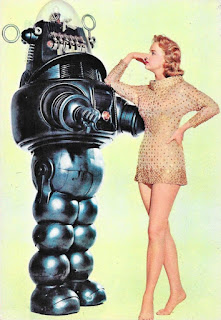 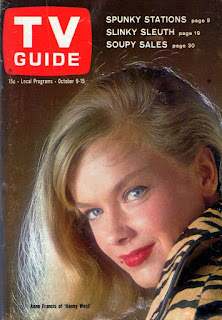 The television version of Honey West started on a second season episode of Burke's Law (another of my favorite mid-Sixties TV shows) entitled "Who Killed the Jackpot." There we met not only Honey, but her man-Friday Sam Bolt (played by John Ericson) and her pet Ocelot, Bruce. Honey must have made an impression with viewers and producers alike because two writers from Burke's Law were told to develop a stand-alone show for Honey, which premiered on ABC in September 1965. It's funny how some things can make an impression far beyond the reality of the situation. Seen through the prism of memory, Honey West had a long run, was a reason to tune in every Friday night at 9 PM, right after The Addams Family (yet another of my favorite mid-Sixties shows). Alas, such was not the case. Honey West endured but a single season, a mere 30 episodes, killed off by two factors--the cold equations of the Nielsen Ratings put it behind Gomer Pyle, USMC (of all things!) and ABC's moguls decided it was cheaper to import The Avengers and run it in the time-slot. (Philistines!) Well, if I couldn't have Honey, at least I could watch Emma karate chop the villains. 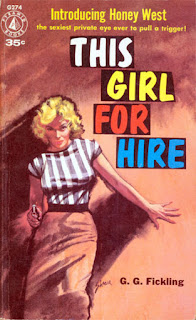 Fortunately, Honey West the literary character had a longer run than her television avatar, beginning in 1957, ending in 1972, at least for novels written by the original authors. I came a bit late to the party, not reading my first Honey West novel until the Eighties, and I started with This Girl for Hire, which was the first novel in the 11-book series. Here's a list, for the collector:

I discovered that Honey West of the books was not only tougher than her TV counterpart, but sexier too. Somehow, she always managed to lose her swimsuit top or her blouse or her dress, and yet she always managed to retain her honor and her virtue. She was very much the equivalent of the shining knight of detective fiction, the private eye able to walk the mean streets without becoming mean. In that respect, Honey West reminds me of Philip Marlowe, but she also calls to mind Edgar Rice Burroughs' Martian Princess, Dejah Thoris, who never wore anything but a battle harness and weapons (illustrators are not allowed to get it right) and yet always remained clothed in virtue and righteousness. Pity the poor fool who ever mistook Honey for either an easy frail or a damsel in distress. 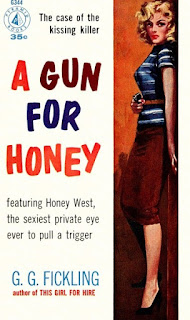 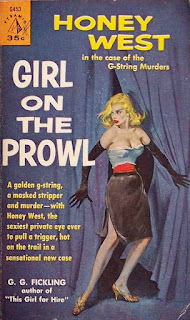 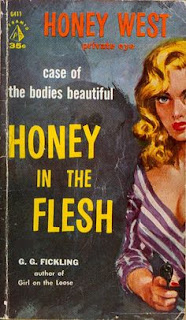 The books were written by Gloria and Forrest (Skip) Fickling. Technically, the byline of GG Fickling is not a pseudonym for they were Gloria's initials and surname, yet it is because they both wrote the books, especially the first two or three. According to Gloria, Skip did most of the writing starting with Honey in the Flesh, with her contributing plots and characters. Those readers coming to the series and expecting to find the television show might be disappointed. No Bruce the Ocelot and no high-tech 007-like gadgetry. There was also no man-Friday Sam Bolt; instead, we have Lt Storm from the Sheriff's Office, who was more antagonist, rival and frustrated rescuer than helpmate. Still, you have Honey, and that is quite enough. The books are well worth the effort to track down, at least the original ones...there are some modern books with the Honey West character brought back, but since I haven't read any, I can't say anything about them. By the way, if you like the mix of murder and breezy humor that was a hallmark of the Honey West books, then you'd probably also enjoy Richard Prather's Shell Scott series of novels, which have a similar approach to crime solving.