A few years ago I posted a blog about when I introduced Sherlock Holmes to HP Lovecraft in The Adventure of the Ancient Gods. If you're interested in reviewing it, you can click on the link in the title and be taken there. However, if you're interested in reading the story, you may have a bit of a problem. Copies of the original fanzine, Holmesian Federation #4 are very difficult to find and can be costly; copies of the chapbook published by Gary Lovisi's Gryphon Books are likewise hard to find and can be even more expensive, especially if it's the first edition with my name misspelled on the cover. Purchasing the book, along with any of my other Sherlock Holmes books published by Gryphon is no longer an option, thanks to a visit by Hurricane Sandy in 2012. That incident led me to republish a later book, which introduced Sherlock Holmes to HG Wells' Time Traveler as Sherlock Holmes: The Coils of Time & Other Stories. The "other stories" in the book were all new ones I had written after 2005, all either about Holmes directly, in homage to Holmes, or about other characters in the Canon. 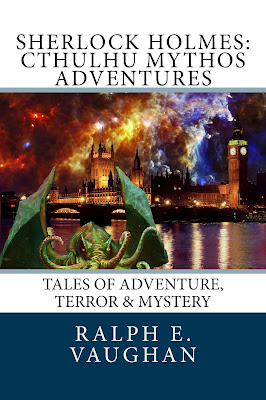 In the two years that have passed since that first Holmes collection, I've written two steampunk novels, four volumes in a continuing series about the Three Dog Detective Agency, and edited a collection of my SF, fantasy, mystery and horror stories from 1970-2000. But I've always wanted to bring back "The Adventure of the Ancient Gods," as well as "The Terror Out of Time," a sort-of Cthulhu Mythos tale teaming Sherlock Holmes with Professor Challenger, Conan Doyle's scientific adventurer, in Edwardian London. That goal has finally been achieved with the publication of Sherlock Holmes: Cthulhu Mythos Adventures. In addition to the two stories mentioned, we have "The Whitechapel Terror," in which Holmes is helped by Brigadier General Knight (one of my other series characters) and a most unlikely hero named Sherrington, a sort of Woosteresque chap; "The Woods, The Watcher & The Warding," where Holmes and Watson venture into legend-haunted Hammershire County to come to the aide of Lestrade and a man who may be guilty, but not of what everyone thinks; "The Adventure of the Shattered Men," in which Holmes makes a solo trip to a isolated island in the North Sea to help an old friend who fears the wind; "Lestrade & the Damned Cultists," where the redoubtable Scotland Yard inspector finds himself bedeviled by occult forces, aided only by his own skill as a detective, the dubious assistance of Detective Sergeant Jacket, and come characters met along the road; and "The Whisperer in the Highlands," where a very young Sherlock Holmes comes to the aide of an old Scottish professor of geology (also the narrator of the tale) who is plagued by nightmares and a voice that whispers. In the first collection, Holmes was often off stage or merely an inspirational spirit, but in this new collection Sherlock Holmes plays a key role in every story. Hopefully this will be a treat for both fans of HP Lovecraft and Sherlock Holmes.