I like to say I have a fondness for maps, but I heartily disagree with those who claim my relationship with products of the cartographer's art is more like an addiction. After all, my "fondness" for maps and charts of all kinds does not at all approach the feelings I have for books: then "addiction" might be an appropriate word. When we come to atlases, however, we move into dangerous territory, and over the years I have bought every affordable atlas I've come across, the older the better, and let's not even go into my collection of London guidebooks; but I'm at my most vulnerable when I come across atlases containing maps of worlds that never were, maps that chart the geography of the mind and the imagination. Two atlases I bought back in the early 80s still afford me hours of charted pleasure, nearly as much the the literary milieu from which the maps were derived. 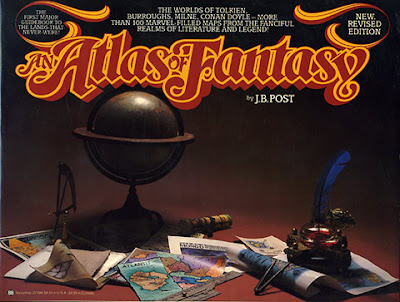 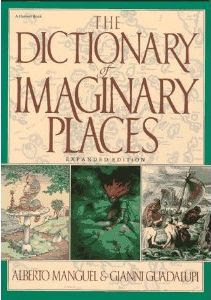 An Atlas of Fantasy by J.B. Post was first published in 1973 by Mirage Press but because the publisher was a very small press (founded by writer Jack Chalker) dedicated to nonfiction and bibliographic works of a fannish nature, Atlas did not receive the distribution or recognition it deserved. Ballantine Books issued a revised mass market edition in 1979, for which they deleted 11 maps, but added 14, and it is this edition, its cover depicting a map collector's fantasy, with which most people are familiar. The emphasis is on science fiction and fantasy, so we get maps of various avatars of Mars and Venus, Middle Earth, Narnia and the imaginary landscapes envisioned by H.P. Lovecraft and Clark Ashton Smith.

In The Dictionary of Imaginary Places, however, the emphasis is on terrestrial realm, as science fiction maps of worlds beyond the sky are specifically excluded, as are maps of Heaven, Hell, the world of the future, and real places festooned with literary traditions. Despite all that is left out, the inclusions make for a very thick book. Published in 1980 (revised in 1987 & 1999), The Dictionary of Imaginary Places by Alberto Mangual and Gianni Guadalupi delves into almost all fantastic literature, published from the Middle Ages to the middle of the 20th Century, where some lost, forgotten or imagined realm on Earth is mentioned, most of it obscure to even the most widely read fan. What raises this book from its titular claim of Dictionary to Atlas are the tremendous number of maps, both original and those prepared for the volume. 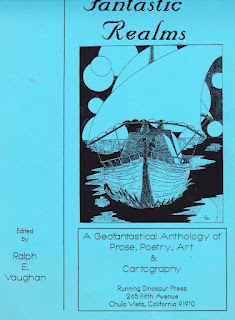 Both these books were very in mind when in 1992, under my Running Dinosaur Press imprint, I edited and published a 67-page booklet entitled Fantastic Realms -- A Geofantastical Anthology of Prose, Poetry Art & Cartography. When I sent out a call for submissions and sent guidelines to interested writers I made it very clear that all stories and poems had to possess a strong "sense of place" if they had any hope of being published here; and I gave preference to stories that were "chartable," in that they told a fascinating tale while at the same time gave me enough information to draw a map. The response was good and I received about two dozen works worthy of publication; additionally, I was able to create eight maps, which I included in a section entitled "Cartigraphia Fantastica," attended by a short essay on maps in general, fantasy maps in particular. Several maps were derived from stories in the booklet, some were from fantasy traditions (such as a map of Osirian Africa and a kinetic mapview of Lemuria), but the one which I enjoyed most drawing and bringing to fandom's attention was a map of the city of Hampdon ("the Arkham of he West...") which was based on the works of my dear friend Duane Rimel (1915-1996), and although he did not have a work in Fantastic Realms, I had in the 1980s republished his classic fiction and poetry in The Many Worlds of Duane Rimel and The Second Book of Rimel, as well as an illustrated version of his sonnet sequence Dreams of Yith. The booklet was well received and sold out quickly.

Maps have always gone over well with readers of science fiction and fantasy. In addition to the two mass market books mentioned, there have been other books dedicated to a single author's vision, in which maps were well represented. It's hard to think of Middle Earth, Barsoom or Dune without thinking of maps. Indeed, there are probably more people who could point out Helium, The Shire or the Imperial Basin on a map than could find Colombia, Iran or Lapland...I just can't figure out whether that is good or bad.