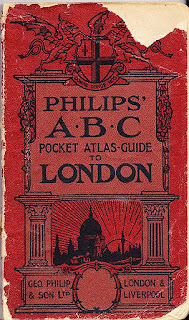 Gary Lovisi is the publisher of Gryphon Books of Brooklyn, N.Y., avid collector of paperback books, and Sherlock Holmes expert. When it comes to paperback collecting, he wrote the book...no, really, he did write the book: the Antique Traders Collectible Paperback Price Guide. And when it comes to Sherlock Holmes, his knowledge is inexhaustible. And the books published by his own small press house are worth collecting themselves. If you have never visited his website, please do yourself a favor:

But back to Gary Lovisi's culpability. After Gryphon Books published Sherlock Holmes: Adventure of the Ancient Gods, Gary suggested that, were I to write a sequel, he'd be interested in "first refusal." A sequel was far from my mind, but Gary had planted the seed, and eventually I wrote Sherlock Holmes and the Terror Out of Time and Sherlock Holmes: The Coils of Time. So, am I blaming Gary Lovisi for those books? No, not at all; I blame him for my fondness ("addiction" is such an ugly word) for London guidebooks. 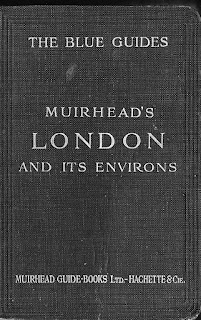 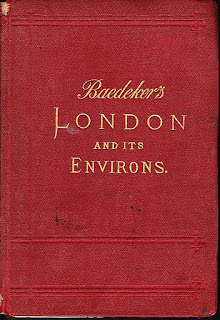 Before ever I write a single line, I delve deep into a region's lore and history. Nothing unique about that. Many writers' yarns could be used as walkabout guides. Personally, I love stories with a strong sense of place. Sir Arthur's own tales document London with the accuracy of a camera; one of my favorite books pairs quotes from his stories with period photos. Other writers who have married fiction and geography include Raymond Chandler, HP Lovecraft, Steven Saylor and William Faulkner. I also read books about time periods, but I favor books from from those periods, particularly guidebooks.


I told myself I was tracking down various editions of Baedekers, Muirhead's, ABC Rail Guides and many others just so I could accurately trace my way through London and provide readers with a memorable and accurate visit to Baghdad on the Thames. Of course, after about a dozen acquisitions through EBay, estate sales and various booksellers, here and abroad, that excuse began to wear thin, even to me. 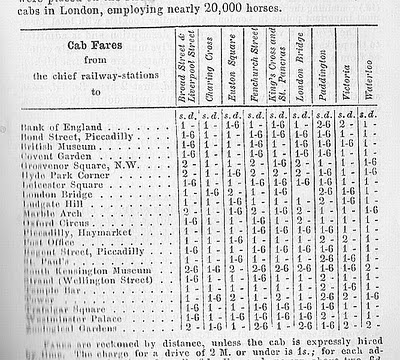 When a passing cab picked up India Jack Neville near the East India Docks it was equally important to me that all the streets and buildings were correct as it was that poor India Jack not get rooked by the driver. However, since the British tar did not live long enough to pay a fare, the amount was actually something of a moot point. Still, knowing how much it would cost for a hansom cab ride from Charing Cross to the Zoological Gardens, for example, is a nice thing to know. Like it might come in handy some day. Well, it might! All right, maybe not, but still nice to know.


Guidebooks of London from the Victorian and Edwardian eras are not really that difficult to find, nor need they be expensive. A great many came to me via the EBay auction site, which used to function like a global car boot sale or a million garage sales; unfortunately, the once-friendly site has been overrun by corporate entities, grifters and swindlers from the Far East. ABE Books was another good source, but, caution is always advised when buying a book online, even if a photo is supplied, and sellers found themselves peppered with queries. My favorite method of purchase was in person, and it really is surprising how often antique guidebooks show up at estate sales and charity shops. Regardless of how I came across them, I still had more books (Victorian, Edwardian, the VI Georgian and the II Elizabethan) than I could ever justify with any number of books and stories I could write set in London. 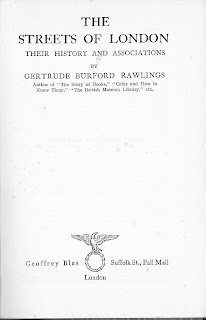 One interesting thing about guidebooks of the past was they were often rife with advertisements. While most of the ads concerned hotels in London (none in the East End, of course) and in popular spots along the many rail lines, others were for charitable associations, house agents and purveyors of "personal" products. Here are a few examples:


So, you see, I would not have any of these dozens of books had Gary Lovisi not asked for "first refusal" of books I had no intention of writing. Acquiring so many was just an outgrowth of my desire to provide readers with literary excursions that were as accurate as possible, a sense of verisimilitude that they could "take to the bank," so to speak; I'm sure I was just trying to follow the guidance of the great Isaac Asimov, who once said: "No one reads a story for scientific facts, but certainly no one reads it for errors." And I think the stories I wrote were the better for the cultural immersion of their author. 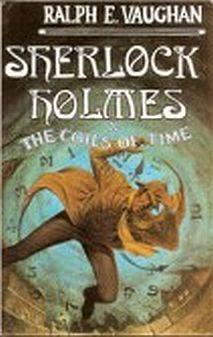 On the other hand, while I might be able to pass off responsibility to another for my collection of London  guidebooks, street histories and books about the lore of London, it is, I admit, difficult to explain my affinity for Victorian novels, especially those of the sub-genre known as London shop girl stories...will the poor lass discover the truth about her inheritance...will she marry the duke who does not realize her lowly status in society...will she find happiness? I just have to know.