I read a dismaying statistic years ago when studying Egyptian, Greek and Roman literature: of the stories, poetry, histories, plays and essays written by the ancients, only a small fraction of one percent survived. Even more disturbing is that our culture's writings may suffer the same fate...destined to be neglected, then forgotten, then lost. But, what about the Internet, you cry, where everything lasts forever? Actually, the Internet is a fragile construct, easily be destroyed from within (nasty electronic worms) or from without (EMP, or a president with a kill-switch). And as far as your Kindles and Nooks, transitory storage until your batteries run out after the end of civilization. Paper remains the most enduring medium. 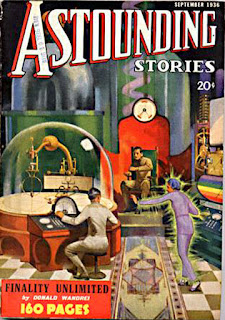 And, yet, paper does have its limitations, especially when it comes to the pulps which were named for the cheap paper upon which they were printed. I can scan the cover of this 1936 issue of Astounding Stories without damaging the magazine, but if I wanted to read "Finality Unlimited" by Donald Wandrei, the story depicted in an almost Byzantine manner on the cover, I would be...well, I would either be out of luck, or a fool for cracking it open, emphasis on "cracking." Though protected from further decay by polyethylene, the forces of air and moisture have already attacked the pages, leaving them brittle.

Who is Donald Wandrei?

Writers are subject to the same forces as their creations. First they are neglected, then forgotten, and, finally, lost. Even though Donald Wandrei was a minor writer in the pantheon of science fiction and fantasy, he was yet an important one, if only because he wrote and interacted so early in the history of the genres. He knew and/or corresponded with all the writers now considered seminal: HP Lovecraft, Clark Ashton Smith, Robert Howard, Howard Belknap Long and others less well known. With prolific writer August Derleth, Wandrei founded Arkham House, a quality small press intended to keep Lovecraft's work in print, but which also published such books as Witch House by Evangeline Walton, Dark Carnival by Ray Bradbury (his first collection), Night's Black Agents by Fritz Leiber, and The Mind Parasites by Colin Wilson. Wandrei received a World Fantasy Award for Life Achievement in 1984, just a few years before his death. 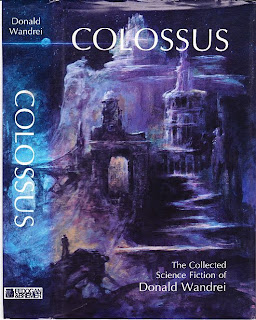 Fortunately for fans of early fantasy and science fiction tales, there are others who are even more devoted to lost causes than are we, those who actually put their money where their heart is, rescuing stories from pulpish purgatory and presenting them in more enduring formats. A collection of Wandrei's science fiction stories had been in the works for a long time, but an Arkham House 1964 edition just didn't happen, and it fell to fan Phil Rahman (who met Wandrei and befriended him at a convention) to publish it with his partner Dennis Weiler in 1989, the first book to carry the Fedogan & Bremer imprint. Colossus was published in a limited edition of 1,000 copies at what was then the whopping price of $28.00. My bookstore of choice in the 1980s was Dream-Quest Books, and Tam, the proprietress, urged me to buy it -- it would help the store, I really wanted it, and it was a good investment. Well, she was right about me wanting it, so what else could I do. Now, you can get it for $50-$100, so I suppose she was right about the third reason as well. It collects 21 of Wandrei's stories, including "Finality Unlimited." Wandrei's science fiction was unusual because it revolved about grand cosmic ideas rather than characters or action plots. His tales embodied that "sense of wonder" which. for the most part, has been lost in the genre. Although much of the science may have a dated feel to it, as does the writing style, the ideas that drive the stories are as enthralling now as they were 70 years ago. 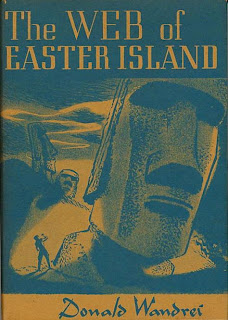 Donald Wandrei's fiction output was mostly in the realm of the short story, but he did write the extraordinary novel The Web of Easter Island, which was published in 1948 by Arkham House. Given the innate mystery of the Pacific island, I'm not surprised Wandrei chose it for a setting, though I am surprised more writers have not followed suit -- of the hundreds of books about Easter Island (Rapa Nui to its inhabitants) less than a half-dozen are fiction. The Web of Easter Island is the sort of book Lovecraft had in mind when he sought to define a "cosmic literature." The protagonist investigates the mystery represented by a strange green stone, discovers a vast vault beneath a graveyard in England, falls into a time trap that carries him to Easter Island as the great statues are awakening...and then things get a little wild after that. It's a thought-provoking and fascinating novel, and I have no idea why it had to wait until 1948 to find a publisher (it was first penned in 1932 under the title Dead Titans, Waken!); but, then, I don't understand why it has not been reprinted since. Tracking down this book in pre-Internet days was not easy, but it's such a simple task now, with BookFinder.com and AbeBooks.com, that I could ask my dog Skipper to fetch it.

About a year before Colossus was published by Fedogan & Bremer, Marc Michaud's Necronomicon Press published two booklets important to anyone interested in Don Wandrei's legacy. The first is Collected Poems, which collects poems from Ecstasy and Other Poems (1928), Dark Odyssey (1931) and Poems for Midnight (1964), plus uncollected poems from various magazines, resulting in a comprehensive anthology of all his known poems, accompanied by illustrations from his younger brother, Howard. 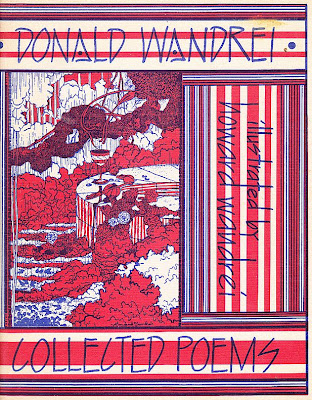 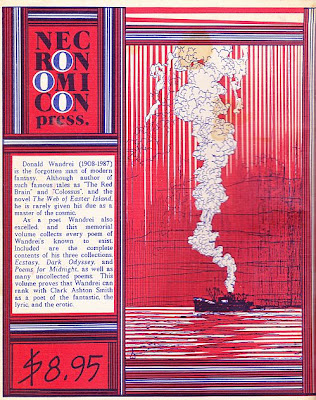 The cover price ($8.95) was a bit steep at the time, but one of the axioms of the world of small press publishing is that books will always be more expensive because of small press runs, specialized interests and narrow profit margins. The other half of the equation is that, with time, most of these small press booklets increase in value; what I paid $8.95 (+shipping) can now be had for about $50. 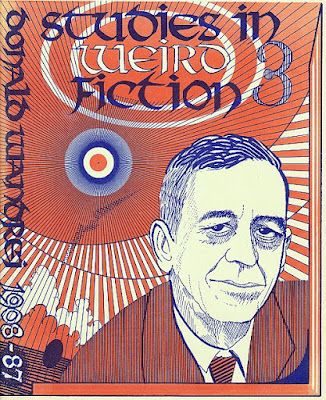 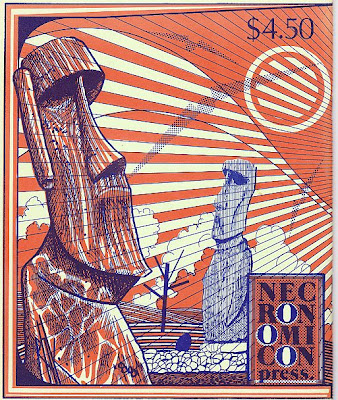 The second booklet of interest from Necronomicon Press is the third issue of Studies in Weird Fiction, a journal of occasional frequency. This publication in 1988 and contains several memoirs about the man, and some studies of an academic nature. To find this booklet now is not difficult, but the $4.50 price is a thing of the past -- dealers want a minimum of $100 for it these days.

The past may indeed be an elusive goal, constantly eluding our grasp, but that does not mean our literary heritage is beyond rescue. A thousand copies of Colossus were printed, and my copy will endure, as will  The Web of Easter Island. Only about three hundred copies of Collected Poems and Studies in Weird Fiction were printed by Necronomicon Press, but I have a copy of each in my library. An idea I've toyed with from time to time is a scenario where civilization (as we know it) comes to an end, an impoverished civilization arises on the old, future archaeologists burrow into the ruins of my library and rebuild civilization according to what they find...not entirely impossible, but, admittedly, these future people might develop some strange ideas about the past. What can I say -- eclectic!