Under the Moons of Barsoom

I first traveled to Barsoom by way of Amtor. It was a deep cold night and I sat close to the campfire, feeling the heat against my face, the frigid night's breath against my back. The skies were cloudless, the stars glimmering above the mountains such as they are never seen above the habitations of man. The Milky Way (the Via Lactea of the Romans) was indeed a royal road through the heavens that night, and the wandering planets shone with the glory of unfallen angels. I was not yet a teen, and by the leaping light of the campfire, while others slept the untroubled sleep of the weary or the innocent, I read the following:

When Carson Napier left my office to fly to Guadalupe Island and take off for Mars in the giant rocket that he had constructed there for that purpose, I was positive that I should never see him again in the flesh. That his highly developed telepathic powers, through the medium of which he hoped to communicate with me, might permit me to envisage him and communicate with him I had no doubts; but I expected no messages after he had detonated the first rocket. I thought that Carson Napier would die within a few seconds of the initiation of his mad scheme.
But my fears were not realized. I followed him through his mad, month-long journey through space, trembling with him as the gravitation of the Moon drew the great rocket from its course and sent it hurtling toward the Sun, holding my breath as he was gripped by the power of Venus, and thrilling to his initial adventures upon that mysterious, cloud-enwrapped planet--Amtor, as it is known to its human inhabitants.

His love for the unattainable Duare, daughter of a king, their capture by the cruel Thorians, his self-sacrificing rescue of the girl, held me enthralled. I saw the strange, unearthly bird-man bearing Duare from the rockbound shore of Noobol to the ship that was to bear her back to her native land just as Carson Napier was overwhelmed and made prisoner by a strong band of Thorians.

I saw--but now let Carson Napier tell his own story in his own words while I retire again to the impersonality of my role of scribe.

Such were the opening words of Edgar Rice Burroughs in introducing adventurer Carson Napier, an Earthman marooned upon Venus. I knew Burroughs from his Tarzan books, which I had started reading when I was about six (thanks, Uncle Bob), but these stories set on Venus were new to me, and I devoured them avidly. The most important thing about these Ace Books editions of the Venus tales, however, was that they led me to an even greater series by Burroughs -- the Martian Stories, set on a wonderful and savage Mars, which the inhabitants called Barsoom. 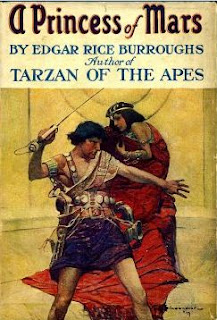 It all began in 1911, when Edgar Rice Burroughs was 35 years old and still wanting to make his mark on the world. He had always been something of a scribbler, but had never been published. In fact, he was somewhat in the dark about how the publishing world worked, what rights were involved, a naivety that was to cost him dearly before he became the consummate self-publicist. He was an avid reader of All-Story Magazine, and decided to go for it. He wrote several thousand words of a novel that had been rattling in his head, and promised he could supply the rest of the story. Editors were a bit more human then, and publishing not yet a soulless business, so the editor responded with suggestions about pacing and content, and gave him an invitation to submit. So Burroughs sent in Dejah Thoris, Martian Princess under the pen-name "Normal Bean" -- the story was so wild (science fiction had yet to become a recognized genre) that he did not want people to think him a lunatic; the editor decided on Under the Moons of Mars as the title and a typesetter decided "Normal" was just a typo to be changed to "Norman," and the first adventure of Captain John Carter of Virginia on Barsoom exploded upon the world in 1912. 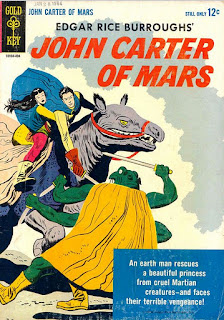 Under the Moons of Mars saw book publication in 1917, after Burroughs had gained worldwide fame through the Tarzan tales, as A Princess of Mars, the title under which it is now known. There are eleven tales in the series and I read them all. I had caught the Barsoom bug, which forced me to go beyond the novels published by Ace, later by Ballantine. One natural format, both for the Barsoom stories and to grab my attention, was the comic book. Say what you want about comic books and the seduction of the innocent, but they helped me learn to read, so when I saw the Gold Key adaptation of A Princess of Mars (though they titled it John Carter of Mars, the eleventh book) I could not resist.

The world of Barsoom was based a bit on the Mars theories of astronomer Percival Lowell, portraying it as a dying desert planet. Burroughs populated it with savage green men with four arms, holy white priests, black pirates and scientific red people...then got really wild, creating entire societies, artificial languages, histories, animals and a unique ecology, even before environmental concerns became ubiquitous; he even created a Martian version of chess, which took central stage in the aptly titled The Chessmen of Mars. One of the most astounding aspects of the Mars series is how well everything holds together. 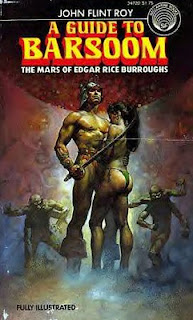 One of my favorite books about Barsoom is written not by Edgar Rice Burroughs, but by fan John Flint Roy. The copiously illustrated tome A Guide to Barsoom delves into every detail of the imagined world, its people, geography, history, culture, even its weapons and wrist-watches. A magnificent literary achievement which is unfortunately and undeservedly out of print. However, I hope that will soon change as a whole new generation is exposed to Burroughs' Barsoom.

Like other Burroughs fans, I've always looked forward to (and dreaded) a film version of the book. Yes and no -- every avid reader has a love-hate relationship with Hollywood. We look forward to seeing our favorite books brought to the big screen, then walk out the theater muttering (or yelling), "The book was better!" With A Princess of Mars, however, there was something of a general consensus that a faithful film version was not possible. While stop-motion photography (state of the art then) could probably have handled the special effects with efficiency (look at what was accomplished in 1963's Jason and the Argonauts), what to do about a human who is supposed to hop in the lighter Barsoomian gravity like a super-kangaroo and characters who were clothed in...well, they were garbed in their virtue and not much else? The human form is more perfect in its idealization than its realization, and the old adage of it looked good on paper is no truer than in the costumes (or lack thereof) of Barsoom. Still, we have always yearned...despite Hollywood's rather wretched reputation.

But time moves on -- we have computers now, and society has new mores. A film adaptation of A Princess of Mars has been in the works so long that most people gave up on it ever coming to fruition. Those who kept the faith, however, will be rewarded on 9 March 2012. 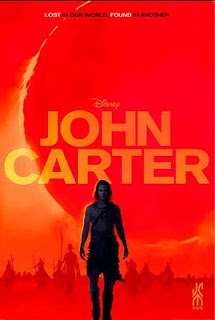 The initial title was the same as the book, but for reasons unknown the studio changed it to John Carter of Mars; then, for even more obscure and unfathomable reasons, the title was changed to John Carter, not a good idea as far as I'm concerned. The decision not to use A Princess of Mars might have been an attempt to distance the Disney production from the 2009 Asylum-produced straight-to-DVD mockbuster film Princess of Mars, which starred male model Antonio Sabato Jr as Afghanistan-stationed sniper John Carter and heartthrob Traci Lords as a not-quite-so-young blonde Dejah Thoris; but the decision to take "Mars" out of the title...they're on their own to explain that bone-headed move. I've seen the trailer for John Carter, and it's easily searchable on YouTube if you so desire, but you really can't decide anything from a trailer -- given good editing, dynamic music and smoldering close-ups, even Congress could be made to look interesting. 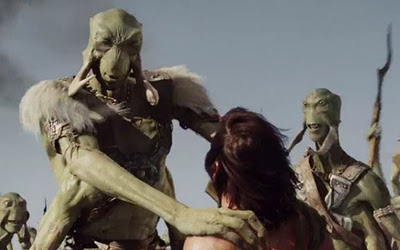 I guess what fascinates me most about A Princess of Mars is that it's never really been out of print, even after nearly 100 years; despite the best efforts of academia it's the popularity of the book that keeps it in print, not its position on a list of "required reading." Though it's been decades since I discovered the worlds of Edgar Rice Burroughs, not just Amtor and Barsoom, but Pellucidar, Caprona and Lunaria, I find they have remained fresh to me. Hopefully, even if the Disney film is a dog, the film will bring new readers to the books; and boys and girls will once again gaze at the night sky, at a shimmering ruddy light bright in the welkin, and dream of riding their thoats across the deserts of Barsoom. 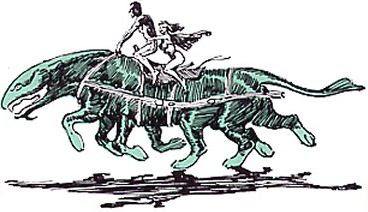 And, now, a quick look at some interpretations of A Princess of Mars,
Barsoom, John Carter, Dejah Thoris & Tars Tarkas: