I laugh in the face of the apocalypse 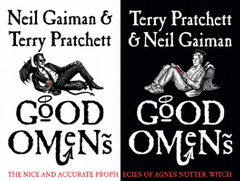 Good Omens is one of my favorite books. I pick it up every once in awhile and reread it. Now is one of those times. It is one of the few books I will not read on the bus because I cannot control my laughter, and start to scare even those who have been carrying on conversations with themselves or their invisible friends.
I am on my third of fourth copy of this book and it is one of the few books I will immediately procure a replacement if I’ve found I’ve lost it.  Usually, if I lose a book, I will either never replace it or I will wait a significant amount of time before replacing it. I do this for two reasons: the first is practical, the second, not so much.
The first reason for my reluctance is that I think I might find it soon – I wouldn’t want to buy a new copy, only to find it when I get home later that day. The second reason is out of a sense of guilt. It is a self-punishment. How could I have been so careless with something as precious as the written word? For my carelessness, I deserve to be punished by having a book withheld from me. But with Good Omens, I can’t bring myself to inflect that drastic of a punishment. It is too much to bear. Yes, I deserve to be punished for losing the book, and I should be punished, harshly, but the punishment of being separated from Good Omens is simply too great. Instead, I inflict a different punishment, such as no pasta for a month. Severe, yes, but not as severe as being separated from such a great book.
I stumbled upon Good Omens when I had just gotten into my Terry Pratchett phase before I started finding some of his humor a little too forced for my tastes (don’t get me wrong, I still like a lot of his work, I just can’t go on a huge reading jag like I could when I first started, I have to break it into smaller doses) and after I had exhausted all the Simon R. Green’s I could find. Good Omens is written by Terry Pratchett and Neil Gaiman, and is an absolutely perfect blend of the two. They temper each other well, and they may have quite possibly written the funniest book I have ever read.
It is a humorous tale of the apocalypse and all the mix-ups, panic, and assorted going-ons surrounding it. As I’ve mentioned earlier, it is a book I cannot read in public simply because I’m afraid I’ll pull a muscle trying to stifle the maniacal laughter that will inevitably bubble up from me.
Posted by Arimintha at 19:42