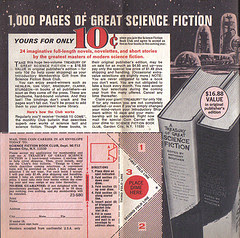 I was pretty young when I discovered an ad for the Science Fiction Book Club, probably on the back cover of one of the many science fiction magazines I was reading at the time. There were more than a dozen SF magazines on the racks then, both major and minor, original and reprint. I don't remember how old I was or the name of the magazine in which I found the advertisement, but I do recall the title of the first book I ordered--A Treasury of Great Science Fiction, in two volumes, which I still have, though the covers did not fare as well as the books in my many moves across the country and around the world. I also remember taping the dime in place, folding over the flap and filling all the information requested on those much-too-tiny lines. When I received the two-volume anthology, I devoured it, and even now I read the stories in it from time to time. I still consider it one of the two best SF anthologies ever published, the other being Adventures in Time & Space. I love anthologies, but Treasury was not just another anthology for me. It was a key to other worlds, both future and past. Since it was a science fiction anthology, it mostly addressed the future of humanity on other planets as well as in deep space, but it also collected a kind of science fiction that was then fading from the scene in favor of a "new wave" of SF. Today, the stories and their language must seem quite alien (code word for quaint, dated or non-PC) to modern readers.

I lived in Chula Vista, a town set securely between San Diego and the Mexican border, a town most people barely notice as they pass through it to or from TJ. When I moved there, the population was 40,000-50,000 people, and we lived in a newly developed area that had once been strawberry fields. My parents paid $1 down, and the house itself was just $23,000. If nothing else, that will give you an idea what that dime was worth. I didn't know it at the time, but the SFBC was only about a decade old. It was founded in 1953 by publisher Doubleday. Like many other book clubs of the day (Detective, Mystery Guild, etc) the SFBC had its own presses and could offer hardcover editions at greatly reduced prices. Where I lived, I could get magazines, comics and pocketbooks at the dime story (Woolworth's or TG&Y) or drug store (Thrifty's...best ice cream around), but hardcovers were another story.

My parents were not big book readers, nor was my brother. My own children experienced many "bookstore weekends" growing up, but my own trips to bookstores as a lad were very few and very far between. So, when I came across the SFBC and its hardcover editions, I did not care that they were a little off-sized, were not entirely perfect-bound, or had dust covers that were not only sometimes plain but plain ugly. What mattered was that they were hardcovers. Each month, I received the SFBC bulletin (Things to Come), read it assiduously, and made my selections. 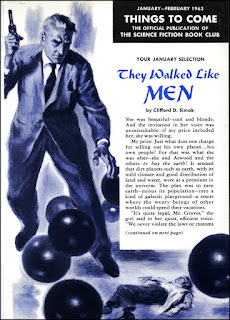 Each book I ordered represented yard work for someone on our cul-de-sac. Every Saturday, I walked down one side of the street and up the other, push-mower trailing behind me, grass clippers in hand, asking people if I could mow and trim their lawns, pull their weeds, and otherwise attend to all their gardening needs that day for the princely sum of $5. Sure, not even lunch these days, but back then it let me order the featured selection of the SFBC and maybe one of the alternates. Doing yard work for others did not sit well with my dad, since I was so lackadaisical when it came to doing yard work for him. On the other hand, he only gave me a half-dollar a week, when I got anything at all. With books in the balance, is it really any wonder that I followed the market? 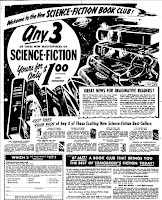 Another reason the SFBC was important to me was because it represented a lifeline to a world beyond Chula Vista, and I don't mean worlds in space. There was no SF fandom around me, no one I could talk to about SF and books. There were magazines, of course, with their letter columns, but that too, was another world, one beyond my reach because even then I led a rather insular life and was more than a little shy. Through the SFBC, I kept current with what the SF authors of the Fifties and Sixties were publishing. 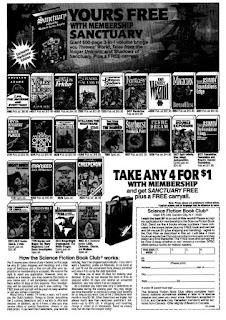 By the end of the Sixties, I had been in and out of the SFBC several times. Some might accuse me of abusing the introductory offer (no longer a dime but a $1), but the truth is yard work is not the most rewarding of labor, nor is it as stable as some might think as a form of employment even though lawns always need mowing, walkways always need to be edged, and flowerbeds always need an undue amount of attention. The problem was, if I had the gumption to walk the neighborhood looking for work, then my clients' own kids could do the same, and in their own yards, by gum! Need I say that I went from being the weird kid at the end of the court, to being the weird kid at the end of the court who made trouble for other kids who wanted to do nothing more than watch television on a Saturday morning and jeer at the kid doing their parents' yard work? I went from unpopular to hated, but I didn't care.

I segued out of yard work and into "real" jobs that seemed just as transitory, such as inventorying LPs at White Front and making tacos. On the surface, I made more money, but by then the American dollar was beginning a wide death-spiral that has not yet ended, and I added a new word to my already too-big vocabulary--inflation. Couldn't afford two books for what I had paid for one, but I still counted it a bargain. Then came the much-vaunted, highly anticipated Twenty-First Century. The future I had been looking forward to arrived, but it wasn't quite what I expected--no colonies on the Moon, no shining cities on Earth, and ("sigh") no flying cars. That was when I parted company with SFBC and science fiction in general, turning to crime and mystery.

The SFBC no longer seemed a lifeline to the world of science fiction. Fandom was just a key-stroke away on the computer, and the SFBC had changed as well. I remember the last time I looked at the monthly bulletin. I barely recognized any of the names. True science fiction, as I counted it, was virtually absent. Instead, there were big comic books ("graphic novels"), art books, fantasy trilogies, and novels which chiefly existed not to provide a sense of wonder but a dumping ground for "strong female protagonists." Most of my series short stories have female protagonists, but they exist to tell a good story, not to advance an activist social agenda guaranteed to eject me from a story. It was about that time I noticed all my favorite science fiction writers were dead. So, I parted company with the SFBC and science fiction, one completely and one mostly, for the same reason--they no longer offered anything I wanted. Or had I slipped out of their target demographic? Like a dinosaur supplanted by mammals?