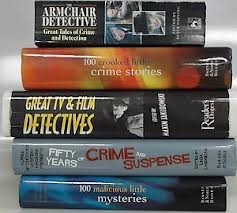 Novels sell very well, and most commercial fiction (i.e., it pays the bills) is in the novel format. Collections of short stories by established writers do not sell as well, but they are bought by fans. Anthologies generally do not sell very well at all, and when they appear they are usually targeted to a specific sliver of the reading public -- Sherlock Holmes fans, Lovecraft fans, ghost story fans, locked-room murder mystery fans, and the like; anthologies not ensconced in a specific genre are aimed at academic and library audiences. Despite the relative poor sales figures for anthologies, they are still edited and published for an ever-dwindling audience that yet appreciates the short story, endangered species of the literary world. I always wondered what to call those of us who still like diving into anthologies, and finally got an answer a few weeks ago when reading Bennett Cerf's introduction to his 1945 Modern American Short Stories anthology:

The cheering knowledge that this book is intended solely to provide amusement for the reader, and that there is no thought whatever of providing a textbook or pretentious "survey of the short story in America," permitted the editor to range as far afield as he liked in his choice of contents. This will explain at one time the inclusion of certain stories that are decidedly unorthodox and the omission of a few trusty warhorses reprinted so often that inveterate anthology hounds can recite them in their sleep.

Anthology Hounds? I think that's a pretty apt description of our literary mentality. If you know anything about the dog world (if you don't like dogs, you might as well tell me you don't like books either so I can shun you with a clear conscience), you know the hound holds a special place among breeds in that they "track or chase the quarry sought," and they do not give up until they find what they are looking for, whether it's a duck, a raccoon or an escaped convict trying to lose a posse in the bayou. On the other hand, Coonhounds and Bloodhounds may not be quite as tenacious as Anthology Hounds.

I find myself reading anthologies quite often, but I rarely list them among the books I read and review for GoodReads.com. Except for certain anthologies (Steampunk and The Great Detective: His Further Adventures were the last two), I rarely read them all the way through. I'm in for three or four stories, then on to something else, but I always know I'll be back, over and over. But even finishing an anthology means little, for a good Anthology Hound will always return.

It would be a fool's task to make any kind of a "best anthology" list. A hundred people assembling a list of the top ten anthologies would quickly discover they had a hundred different top-ten lists, no prospect of compromise, and fights to the death would quickly break out. However, I want share some anthologies that I've truly enjoyed; maybe you could do the same. 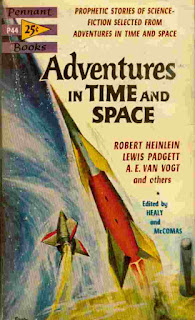 I recall quite distinctly buying Healy & MacComas' Adventures in Time and Space in 1962 at the National City Swap Meet. It was one of several dozen used books on a rickety wire spinner (do you recall those?) and I got it for a dime. It was a hot clear blue day but as I sat at one of the tables where food was sold and started reading, the sky darkened and became full of stars, a rocket ship dropped out of space, and its descent was watched keenly by the last surviving member of a race that had hunted all other life on the planet to extinction. It's an amazing collection of stories, which I have now in hardcover and which I still delve into from time to time. First published in 1946, it collected the best of the science fiction published up to that time, stories which still remain as relevant now as they were back then. All of the stories made something of an impact on me back then (and most still have that power) but several stand out. There is "Black Destroyer" by A.E. van Vogt, the story referred to above, "The Sands of Time" by P. Schuyler Miller in which time comes around and we end up chasing ourselves, "Nightfall" by Isaac Asimov in which a planet that has never known night experiences starlight for the first time, Harry Bates' "Farewell to the Master" which was filmed as the less effective The Day the Earth Stood Still, van Vogt's amazing "The Weapon Shop," and Lewis Padgett's menacingly humorous "The Twonky." Despite the passage of time and innumerable anthologies published since then, it remains a colossal achievement. I might even go as far as to say it's the best SF anthology ever...but I don't want people to throw things at me. 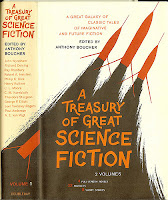 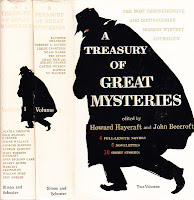 Both these great Treasury of... anthologies (each a 2-volume set) came to me through book clubs, the Science Fiction Book Club and the Mystery Book Club.  Back in those days, to get the introductory offer you listed your choices, taped your dime to the response card, mailed it, and got your swag in a couple weeks. The clubs still work much the same way as they did, but, as you might guess, the dime is history. Although the genres are different the anthologies were produced at about the same time, cover the same period of American & British writing, and have similar formats -- a mix of short stories and novel-length tales, an advantage of being spread over two volumes. That there is some genre crossover between the two anthologies is hardly surprising as mystery and science fiction have always been kissing cousins. 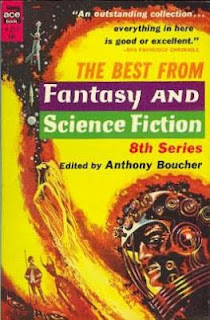 For years and years, I bought each volume of the annual F&SF best-of anthology, even though I was a long-time subscriber and had all the stories already. While I did not always agree with the editor (who does?) the stories were always of the highest quality. F&SF was hardly the only magazine to issue annual best-of collections, for in those days the newsstand was packed with digest-sized (sometimes larger) fiction magazines, and many could be counted on for collections, if not annually, then at least once before they went to magazine heaven. Some that stick with me are Galaxy's and Analog's several books, the If Science Fiction Reader, the annual collections from Ellery Queen Mystery Magazine and Alfred Hitchcock Mystery Magazine (not to be confused with the anthologies edited by Alfred Hitchcock himself), the Amazing Stories anthology, and Fantastic Magazine's. All the magazines (even those not producing anthologies) were fertile breeding grounds for stories to be later found in one or more of the many best-of-the-genre collections issued every year, and some of my favorite series were The Best Science Fiction of the Year, Star Science Fiction Series, The Annual World's Best SF and Year's Best SF.  The mystery genre also had its best-of collections, such as the annual Edgar anthologies issued by the MWA, which were always unusual because they rarely restricted themselves to a single year. Genre magazines are now, unfortunately, almost gone and no longer play a major role in filling the two remaining best-of mystery and science fiction anthologies. If you look through the copyright pages (I always do) of Otto Penzler's Best American Mystery Short Stories or Gardner Dozois' The Year's Best Science Fiction, you will note that the inclusions come from just about everywhere except genre magazines. 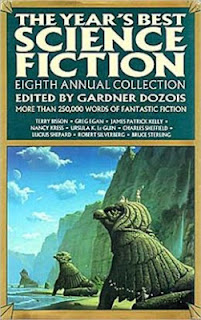 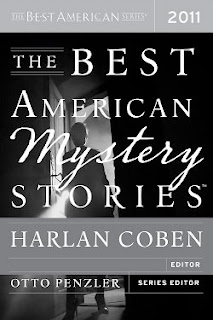 As the magazines began to die off, we saw a rise in anthologies containing fiction written specifically for the particular series (for example Universe), usually at the invitation of the editor. While there were several original-fiction anthologies in the 60s and 70s (and almost all genre anthologies are now comprised of nothing but original fiction), the one that has to stand out in everyone's mind, not just because of the quality of the stories but also the  attendant controversies, is Harlan Ellison's Dangerous Visions (1967) 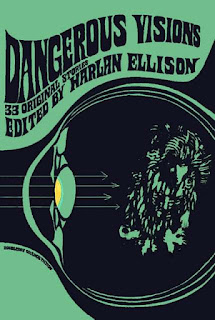 As many people have said over the years, "The table of contents reads like a Who's Who of science fiction in the 1960s," and it's a statement no one can reasonably deny. None of the 33 stories in the book had ever appeared in a magazine, but many of them never could have been published in a magazine of the time. It may have been Endless Summer and Free Love in society, but magazines of the time still clung to boys clubs and twin beds -- if you read science fiction magazines, you could become reasonably proficient in time travel, faster-than-light spaceships, alien psychology and particle physics, but the birds and the bees would have just been terrestrial animals. Though time has dimmed the impact of some of these tales, I still remember quite fondly Fritz Leiber's "Gonna Roll the Bones" and Ellison's "The Prowler in the City at the Edge of the World." Ellison published  the sequel Again, Dangerous Visions in 1972, containing even more stories that could never have been published anywhere else...though of course they were published elsewhere because the anthologies had broken down the barriers. Ellison planned for the ultimate shout at the world in The Last Dangerous Visions, but it is likely destined to become the most famous anthology never published. 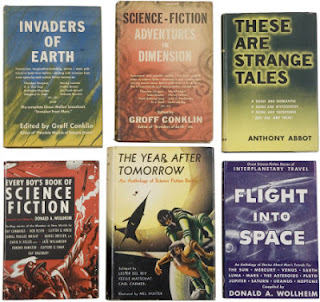 Of course, as mentioned earlier, everybody has a favorite anthology, a different list of best-of anthologies and justifications for the choices, sometimes having to do with the quality of the stories, the literary importance of the anthology, or the prestige of the writers included. But sometimes the reasons are personal and even peculiar. For example, I like Invaders of Earth, one of Groff Conklin's numerous anthologies, not just because the stories are great and I like alien-invasion tales, but because it saved me from drowning in a pond in the heartland of America. I'm sure you have similar stories. 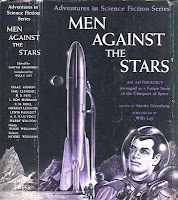 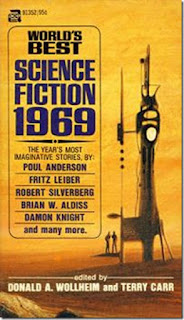 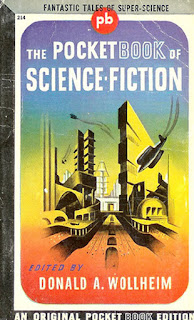 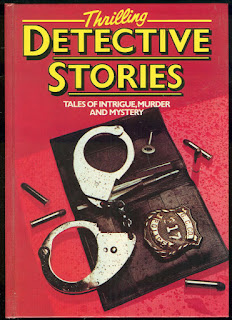 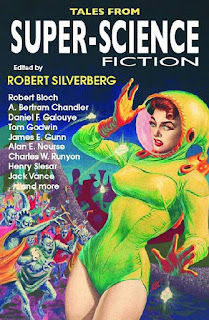 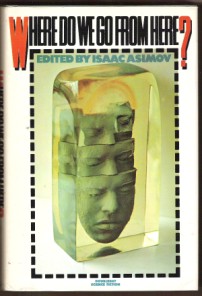 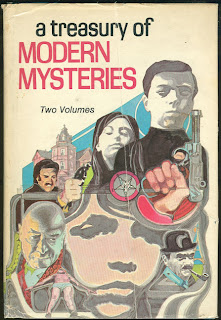