Now, long years after the fact, I am not quite at all sure how I came into the presence of Sir Alfred Hitchcock, but I know it was at a very young age. It may have been through his very popular television show which began in 1955; or it might have been through one of his films, on television of course since my parents were never big movie goers (though I attended at least weekly); or it might have been through his self-named monthly mystery magazine, which debuted in 1956. However, I think it a distinct possibility that I came to Alfred Hitchcock by way of one of his many mystery and suspense anthologies, specifically Stories for Late at Night. 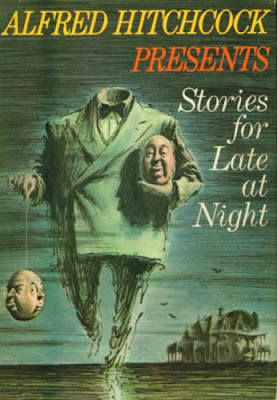 Back in those days (this would be 1961), I found books where I could. Comic books, yes, I could get those at the dime store and drug store where four bits bought five comics, and of course the Evening Tribune came daily to the house, but when it came to real books, grown-up books, I scrounged for what I could find. And one of the tomes I "liberated" (and still have today) was a Book Club edition of Stories for Late at Night, and since I was no less silly then than I am now I, of course, read it...late at night.

In that book are several stories guaranteed to keep a young boy's eyes open till the reassuring dawn, but there a few I still recall reading as if it were only yesterday...I suppose that's just the nature of psychological trauma. Jerome Bixby's It's a Good Life is in there, which most people remember from its Twilight Zone adaptation starring a spooky Billy Mumy doing his best to emulate Anthony's "bright, wet, purple gaze." As chilling as that episode is, it has nothing on the written story...don't disagree, else I'll have to think you out to the cornfield. Roald Dahl's The Sound Machine made me wonder about voices on the winds; Evening Primrose by John Collier made me look at stores' window dummies in not quite the same way; and I could not look at tourists without wondering if they were here from he future to see some great disaster after reading C.L. Moore's Vintage Season. All the other stories had their effects on me, to a lesser of greater degree, but the tale that absolutely kept me up was George Langelaan's The Fly, source of the scary 1958 David Hedison film (sorry, but the 1986 remake was just hopelessly silly). 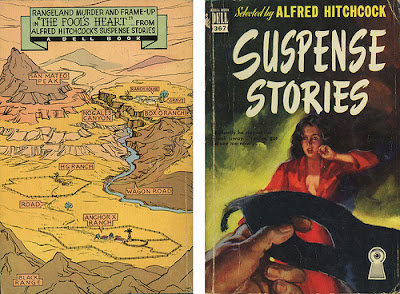 Of course, nowadays, I know a lot more about Alfred Hitchcock than did that silly kid who read under the covers with a flashlight. To him, Hitchcock was just a name on a book, the guy who chose the stories; since then, I've been told by many people that Hitchcock had very little to do picking the stories, that they were ghost-edited for him, but I don't buy it -- I don't know where I read it, and haven't come across it again since I read it when I was in high school, but in an interview Hitchcock said an assistant  helped gather stories for his review, after which he made the final decisions.Even if not true, it still sounds good to me. 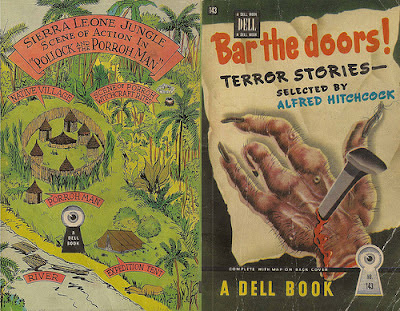 Hitchcock's first suspense anthology was titled, appropriately enough, Suspense Stories (1945), which was followed the next year by Bar the Doors! which was also a Dell Mapback. By 1949 Hitchcock had edited six collections, and since they had all done very well it's a bit of a mystery why no others were published until 1957, when Stories They Wouldn't Let Me do on TV appeared. Personally, I think it had much to do with the decline of recreational reading and the rise of television zombification; ironic, then, that Hitchcock's return to the printed page would have a television tie-in. After that, his suspense and mystery anthologies became more-or-less annual events, and starting in 1977 there were anthologies issued by Alfred Hitchcock's Mystery Magazine on the newsstand racks. 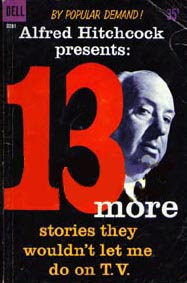 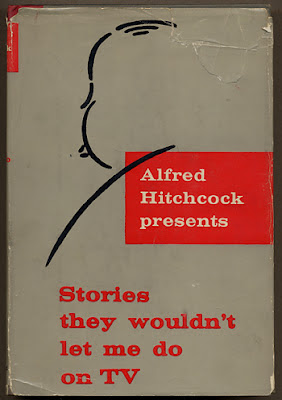 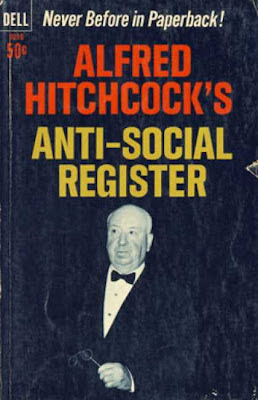 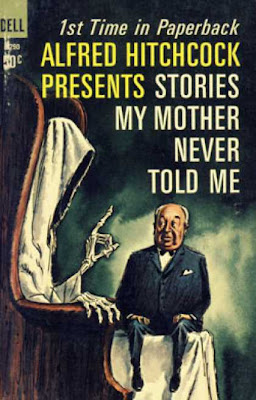 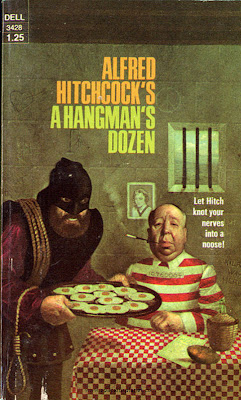 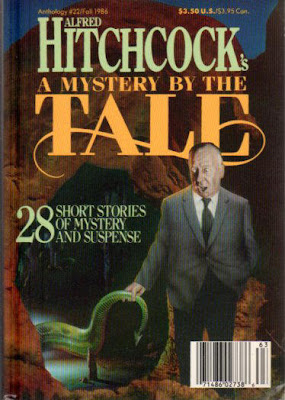 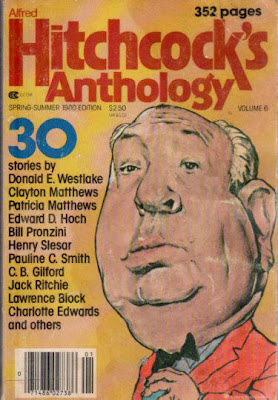 When the magazine-related anthologies started in 1977, by now wholly edited by Cathleen Jordan, the magazine's editor, something seemed to go out of it for me. Yes, the stories were still good, written by all the best writers, but they all came from AHMM, which seemed, to me, to make the scope much smaller. And with Hitchcock's death in 1980 (no more Hitchcock photos on his magazine covers after that), I no longer had even the fiction of his hand at the tiller. And yet I still bought them, still read them, still have them, still re-read them, because any suspense anthology with Hitchcock's name on it is still better than a suspense anthology without his name on it.
Posted by Ralph E. Vaughan at 17:28

Email ThisBlogThis!Share to TwitterShare to FacebookShare to Pinterest
Labels: A Mystery by the Tale, AHMM, Alfred Hitchcock, Hitchcocks Anthology, mysteries