Back in the days when it was a treat to go Downtown, when it was filled with department stores, lunch counters, discount clothing shops and more bookstores than it was easy to keep track of, I always made sure I visited Wahrenbrock's Book House, on Broadway, between Seventh & Eighth avenues, San Diego. Actually, my first trek alone into the urban jungle was solely to visit this bibliophile's dream. It was a time when most men still wore hats, women wore elegant dresses as they sipped cocktails, and a decent allowance could buy a decent number of books. Wahrenbrock's was a three-story building, and just outside the window on the third floor was a once-lit, once-revolving sign that read BOOKS, and I often thought to myself that if I ever slipped into an alternate dimension (I think everyone yearns for that sort of escape from time to time), I'd want to end up in a world where the sign was still lit and still turned. 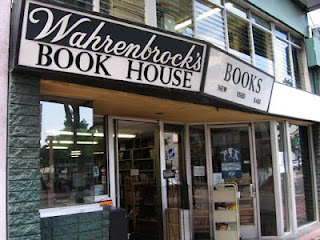 But this post really isn't about Wahrenbrock's, the better times of past eras, the daydreams of a boy alone in the naked city, or even how I really needed a much bigger allowance to feed a habit that, even then, was something of a monkey on my back. No, it's about some of the books I started collecting via the Book House after I started working Downtown in 2000, and until the store closed (a black-letter day) in 2009.

The front area of the second floor, entered after a steep climb up the book-stacked stairs, was devoted to history, travel, anthropology, ancient writings and warmongers; but the rear area of the second floor was given over to general literature, science fiction, mysteries, children's books, drama and poetry, and that was my usual haunt. It was here that I discovered the slipcased gems of The Heritage Press and the Limited Editions Club. And, as they say, there went my lunch money... 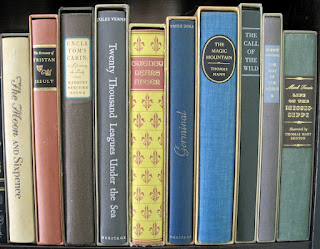 The Limited Editions Club was founded by George Macy (1900 - 1956) in 1929, something of a miracle when you consider it was the year of the Wall Street Crash and the start of the Great Depression, a period of economic disaster that, thanks to government intervention, lasted twelve years rather than two or three. When millionaires are jumping out of buildings and others are reduced to eating in soup kitchens, what sort of a cockeyed optimist starts a publishing company dedicated to producing luxury editions of Western classics limited to 1,500 copies and available only by paid subscription? A fool, obviously, but the kind of fool the world needs more of. 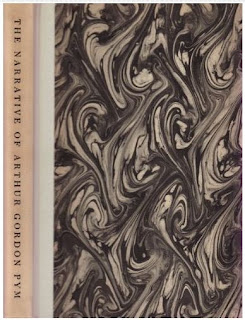 In 1937, Macy founded The Heritage Press with the intent of reprinting the books of the Limited Edition Club, but for a somewhat wider audience. Again, we had the formula -- slipcase, limited edition, by subscription only, commissioned illustrations, and high production standards. Included with each book was a copy of Sandglass, the Heritage Club's newsletter, which carried the epigraph:
The classics which are our heritage from the past,
in Editions which will be the heritage of the future.
For a Heritage Press book to be complete, it must include the issue of Sandglass that subscribers received with their monthly book. The newsletter was an important adjunct to the book in that it gave biographical information about the author, the background of the artist chosen to illustrate the Heritage Edition, and details of the typeface chosen by the book designer. For example, in the Sandglass accompanying my copy of Poe's Antarctic tale, The Narrative of Arthur Gordon Pym, it starts with "To Go Poe":

But what if you are a poet? Is there any likelihood that you would be told to go poe?"

Around the time this edition of The Narrative of Arthur Gordon Pym was published (1930), it had been 100 years since Edgar Allen Poe's disastrous West point adventure, yet another disappointment to his foster father, John Allen. Poe's biographer in the newsletter covers Poe's early life, hits all the literary highlights, paying special attention to Poe's only novel, and touches upon the  controversy of his turbulent life, but, unfortunately, repeats many of the lies and misconceptions that taint his image to this day -- in reality, he died of a brain tumor, not alcoholism. But, all in all, the Sandglass entry is a competent and concise biography.

"The decorations for the book were done by Rene Clarke. When we once made up a list of the foremost illustrators in the land, we approached all manner of authorities for their opinions as to the illustrators who should be in the list. Without exception, each authority included the name of Rene Clarke.

After he had read The Narrative of Arthur Gordon Pym, he came to the conclusion that one kind of illustration was inevitable. The climax of the story lies in the dread of the black people for anything white. The book, then, concluded Mr. Clarke, must dramatize these colors by using black ink on white paper. He made a whole series of designs, with pen, in solid blacks above thin white lines."

The illustrations by Clarke are dramatic and tremendously effective in illustrating Pym's voyage southward in the Grampus; the Sandglass narrator writes that the drawings are "...directed toward a modern feeling...could obviously be done by an artist only in this century," but to me they look like woodcuts, though with a sort of deco touch. Clarke (who was inducted into the Art Director Hall of Fame in 1972) was a good choice for the tone of Poe's tale, which itself stands as between two worlds, the animistic world of the past and the era of science then emerging around Poe, but similar care was taken in choosing the artists to illustrate each classic tome; in the few books without illustration, they were signed by the designer or typographer, and in the case of Ulysses the books (200 of them) were signed by James Joyce.


"It was obvious that, to carry out Mr. Clarke's dramatization of black and white, a dead white paper would be required. Such a paper was especially created, for this book, at the Ticonderoga Mills in Upper New York State. It was shipped to the revered offset-printing shop of Kellogg & Bulkeley in Hartford.

"The type selected by Mr Anthoensen is Scotch. This is known to typographers as a modern face, even though it was originally designed more than one hundred years ago. Probably designed by S.N. Dickinson of Philadelphia in 1837, it attained its first prominence when the type foundry of Alexander Wilson in Glasgow announced a new "Modern Roman" in its catalog.

"The binding has been done by Frank Daniel Fortney in New York. A white linen covers the back of the boards, stamped with the title in black leaf. The sides of the boards are covered with a hand-marbled paper, which we persuaded Putois Freres, in Paris, to make especially for this book: in black marbling on white paper!" 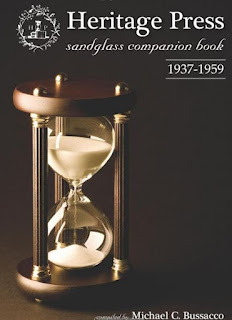 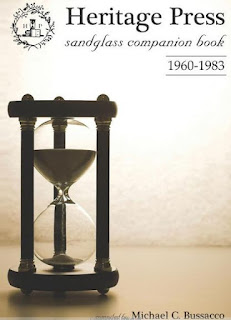 I've quoted at length from the Sandglass that came with my The Narrative of Arthur Gordon Pym, but only as an example of the level of detailed information that was provided to each Heritage Club subscriber. All of the Sandglass issues have been compiled, in two volumes, by famed Heritage Press collector Michael C. Bussacco. While the publishing details might make some people comatose, true bibliophiles will find it a feast, reason enough to track down these two volumes, both of which are available through Amazon.com. Mr Bussacco is also the author of a checklist and price guide of Heritage Press issues. 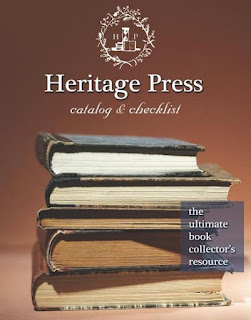 Why do these editions appeal to me, as well as thousands of others? Really, it's hard to say, but I think it has something to do with the care that went into each volume, the idea that each book is as handmade as a 20th Century object can be, even more of a rara avis now that we have moved into the faceless and apocalyptic 21st Century, where even paper books are on the endangered species list. There is a bond between the author, the publisher, the artist, the typographer, the paper maker, the bindery workers, and the reader, and it all comes together in a Heritage Press book -- we are all taking time and effort to share a story as we sit around the campfire that is our sun, co-operating to create a fictional world that, if only for a moment, is more real and more understandable than the physical world, which...

Hath really neither joy, nor love, nor light,
Nor certitude, nor peace, nor help for pain;
And we are here as on a darkling plain
Swept with confused alarms of struggle and flight,
Where ignorant armies clash by night. 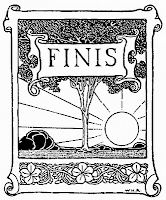