"Holmes, I do not think we are in London anymore."

So, what am I reading at the moment? Well, among many other things a delightful Sherlock Holmes pastiche entitled Sherlock Holmes in Oz by my good friend Gary Lovisi. Yes, as odd as that sounds, Sherlock Holmes, that master of logic and deduction, finds himself in the Wonderful World of Oz, complete with Munchkins, the Yellow Brick Road and, of course, a certain Wicked Witch. A word of warning, however, Gary has based his story on the original 1900 book The Wonderful Wizard of Oz by L. Frank Baum, so don't expect Holmes to break into song with choruses of Munchkins or search for the Ruby Slippers. Those are all products of Hollyweird, not L. Frank Baum's febrile imagination. Adding to the invocation of the original book are the wonderful illustrations by Lucile Cali which are based on the period images by W.W. Denslow. 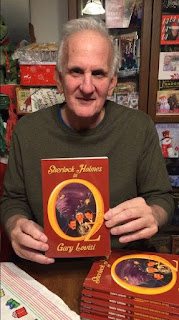 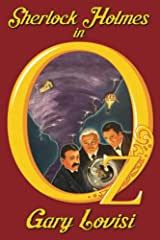 The story begins in London with a new menace taking shape in the East End, an insidious drug involving Red Poppies. Some of the police detectives refer to the addicts as Opium Zombies, resulting in the acronym...well, you get the idea. We also get a flashback to an old case of Holmes', "The Sign of Four," the story in which Dr Watson met of the first of his many wives of indefinite number. Despite this new and pressing case and pressure from Scotland Yard for Holmes' help, the Great Detective decides to help his good friend and biographer Dr John Watson find his great-niece Dorothy, who has gone missing from the plains of Kansas after a great storm.
Gary does a great job of depicting Holmes and Watson, though his vision of Holmes is of a more caring and compassionate man than the one depicted in Watson's jottings. It must be remembered, however, that Watson was writing for a more Penny Dreadful audience, so presenting Holmes as a soulless machine was good for business. It is more likely that Gary's characterization is closer to that of the real Sherlock Holmes. Yet, for all the infusion of humanity, Sherlock Holmes loses nothing of his deductive powers and keen intellect.
While the story contains many fantastical elements (it is Oz after all), I think Gary does very well in maintaining a suspension of belief while adhering to the tenets of the Canon. He does this through spot-on characterization, good plotting, authentic period dialogue, the drawing in of other authorities (such as Professor Challenger), and the ability to present even the most outlandish situations in a calm and logical light. I enjoyed the book very much  and recommend it both Sherlock Holmes and Wizard of Oz fans. It is published by Wildside Press and is available there, on Amazon, and other bookselling venues, in both print and digital formats.
I have known Gary Lovisi for a long time. He is a great writer and editor, is the the owner of the legendary Gryphon Books, is an expert on Sherlock Holmes, and frequently contributes to books and magazines about book collecting and pulp fiction, most recently Ed Hulse's The Art of Pulp Fiction.
Posted by Ralph E. Vaughan at 22:07