The Story Behind "Sherlock Holmes, the Dreaming Detective" 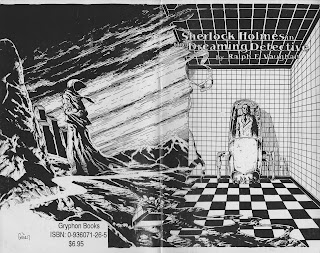 "Sherlock Holmes, The Dreaming Detective" was the second Sherlock Holmes/HP Lovecraft book published by Gary Lovisi at Gryphon Books in Brooklyn, N.Y., though it was the first book specifically submitted to him. At the time, I did not think I would write another Holmes/Lovecraft story, but this tale came to mind, and I had to set it down.

The problem is that the story was not about Sherlock Holmes, but, rather, Serbian inventor Nikola Tesla, Edison's great rival, who is sent by the American government into the Dreamlands in search of Sherlock Holmes. My original title was "The Dreaming Detective" but when Gary changed it for marketing purposes, I felt I owed something more to the reader. After all, if I bought a book expecting Sherlock Holmes, and Holmes appeared only at the very end, ala "The Hound of the Baskervilles," I would feel a bit cheated.

To solve that problem, to restore balance to the universe, to make me feel better, I wrote "The Adventure of the Laughing Moonbeast," a full-fledged Sherlock Holmes story set in the Dreamlands, then asked Gary to include it in the book. He was good enough to do so.

For this book, I exhaustively researched Tesla's life; New York, Washington and Berlin during WW2; and Lovecraft's Dreamland. As with most of my research, only about 5% of what I learned actually made it into the book. One thing I did include, however, was the real reason the Pentagon possesses its arcane shape.

If you want to track down "Sherlock Holmes, The Dreaming Detective," you can check out Gary Lovisi's website at http://www.gryphonbooks.com/

Gary sponsors a huge paperback collectors expo in October of every year, so if you're in the New York area, be sure to check it out.

Thanks for stopping by The Hopeless Bookaholic, and good reading.

Note: This post was originally published on The Hopeless Bookaholic, then transported here when that blog was discontinued.
Posted by Ralph E. Vaughan at 16:16