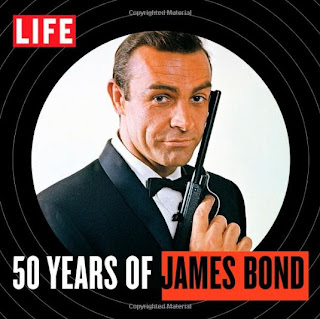 Oh my, all the hype and hoopla about 2012 being the semicentennial or golden jubilee anniversary of James Bond, Agent 007 with a license to kill and thrill in defense of the British Realm. Life Magazine has even risen from dormancy to publish a special issue dedicated to the man with the Walther PPK and all those tricky cars; if you're a fan, I greatly recommend the Life effort despite the hefty cover price and the error made in You Only Live Twice: the editors claim Bond did not drive any vehicle in the film when, of course, he piloted a small one-man helicopter ("Little Nellie"), brought to Japan by her Uncle Q. All the hustle-bustle about the 50th Anniversary is to spark more interest in the latest Bond film, Skyfall. The problem is, this is not the 50th anniversary, but the 60th, the diamond jubilee, or, more appropriately, the sexagennial. Yes, Commander James Bond may have first graced the silver screen in 1962 when Slyvia Trench became the first Bond Girl (sorry, Honey Ryder comes after her) in Dr No, but Mr Bond was first released on a dangerous Cold War world in Casino Royale, written in 1952 and published the following year. It may surprise those who know James Bond only from the great (and some not so great) films, but Bond made ten book appearances before the first film, and his father was Ian Fleming (1908-1964) writer and real-life WW2 spy.

American readers in the 1950s and 1960s encountered the exploits of James Bond in Signet editions, and those are the editions (except for some British numbers) I have in my own collection. They were published in such great numbers that they are still easily found both on and off line. It's probably more of an emotional/nostalgic connection but I prefer these over the later editions, especially those reissued as a film tie-in. James Bond was for me a literary character before I saw my first Bond film, and that's what I think of him as first, even though the fellows who strut across the screens are the ones who will have the enduring public legacy. My hope as a bibliophile, of course, is that the films will lead people to read the books, just as Guy Ritchie's frenetic Sherlock Holmes films led some people to Sir Arthur Conan Doyle. In addition to Fleming's own books, however, there are some other related tomes well worth tracking down. 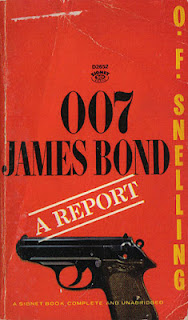 First and foremost in your ancillary James Bond library should be O.F. Snelling's 007 James Bond: A Report, published in 1964. Snelling was a Bond fan from the very beginning, with the publication of that "remarkable book" Casino Royale in 1953; additionally, he was an expert on antiquarian books and worked for several prestigious auction houses including Sotheby's. It's natural, then, that his biography concentrates on Bond as revealed in Fleming's tales. As Snelling wrote the book, he knew he was in a race with Kingsley Amis, who was writing his own critical analysis of the Bond novels; beating Amis into print assured the bestselling status of his own book (hitting the stands at the very apex of Bond fever) but it meant he also beat the publication of You Only Live Twice, which contained an obituary (rather premature, as it turned out) for James Bond, issued by MI6 in an effort to set the record straight about certain "high-flown and romanticized caricatures of episodes in the career of an outstanding public servant." He did not rewrite the paperback edition of the book, but did include footnotes here and there. You Only Live Twice is a good place to stop with Bond, since the true identity of the author of The Man With the Golden Gun (1965) is muddled at best, and the less said about Octopussy & The Living Daylights (1966) the better. 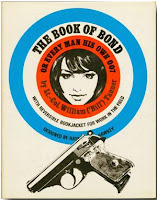 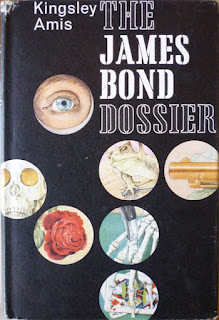 The aforementioned Kingsley Amis was a good friend of Ian Fleming and wrote three books in the vein that of importance. The first, The James Bond Dossier (1965), was his own take on the novels, and although the essay from which the book grew was written somewhat earlier, it was Snelling's book that reached the public first, taking away a bit of the thunder which this book deserves. Amis' own status as a literary giant and a Renaissance man gives his book a depth lacked by Snelling's, as well as a hefty dose of dry British humor. The second is The Book of Bond (Every Man His Own 007), published the same year as Dossier and is a foray more solidly into humor, instructing men how to be like James Bond, using extensive quotes from the books as illustrations; the first edition of this British book featured a slipcase entitled The Bible to be Read as Literature, presumable so agents of SMERSH or SPECTER would not be able to spot their wannabe adversary. The third book to consider is Colonel Sun, first of the non-Fleming James Bond adventures, which Amis wrote under the pen name Robert Markham. Bond, in tracking down the kidnappers of M, foils a plot by Communist China to create an international incident. Not Fleming, but a good novel nonetheless, and much more readable than many of the many novels that followed from other hands. 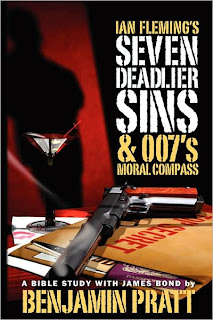 Among the more odd oddities of books about Ian Fleming's literary creation is one written by Benjamin Pratt, a retired pastor of the United Methodist Church. In Ian Fleming's Seven Deadlier Sins & 007's Moral Compass: A Bible Study With James Bond Pratt sees Fleming's tales as modern parables. In seven lessons, complete with biblical references and discussion questions, Pratt examines Fleming's complex spiritual allegories. As Pratt said in an interview with CommanderBond.Net: "...at the core, each Bond tale reflects choices between moral courage and moral cowardice. This is not only reflected in the characters James Bond pursues, but in Bond, as well. When he is true to his duty and mission, his choices are morally courageous. But, like most of us, he gets world-weary (accidie) and he fails to stay true to course. He becomes self-righteous, hypocritical, snobbish, and cruel or lust driven, his most infamous moral struggle. He is constantly battling the inner spiritual and moral war, as well as the war with the deadly demons he pursues." Perhaps the oddest thing about this book is that it actually succeeds in its purpose, and will be of interest to both truth seeker and thrill seeker. 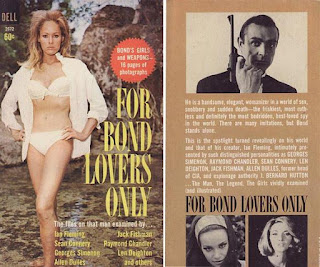 Although there are numerous other books about James Bond (and most of them dwell on nothing but the films), there is just one other book to suggest for your collection of vintage Bond. For Bond Lovers Only (1965), was compiled and edited by Sheldon Lane. Although 19 of the 29 photos in the center of the book are great looking girls from the films (the other photos are of even better looking guns), the real emphasis is on the Bond books, the Bond character, and on Fleming as a writer. Most of the selections have no date or place of original publication, but I think they were either magazine or newspaper features. While the stars of some of the writers have slipped into unfortunate obscurity, many still have prominence today in the fields of spy and crime writing -- in an interview, Raymond Chandler tells what he thinks of Fleming as a writer and James Bond as a tough guy ("a little too tough"); French writer Georges Simenon discusses "the thriller business" in general and Fleming in particular; Jack Fishman interviews Fleming about who Bond is and where he came from; former Communist and espionage expert Bernard Hutton recalls how Fleming interviewed him for an article about spies; and former CIA Director Allen Dulles (The Craft of Intelligence) tells of the Ian Fleming he knew and how he was given his first James Bond book (From Russia With Love), a book he liked not just for its writing but because he lived in Constantinople after the Great War, by Jacqueline Kennedy. More than any of the other books, this one is like sitting down with a few old friends and gabbing about a mutual love. 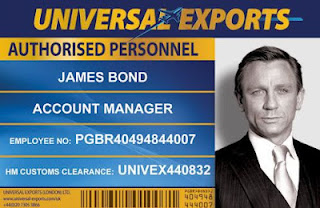 I don't discount the importance and popularity of the films, and I fully realize that if Bond is around in other 40 years (joining Sherlock Holmes in the Centennial Hall of Fame maintained in the Diogenes Club) it will be because of the influence of the films. Still, I have hopes that people will from time to time return to the source waters of the character, and feel refreshed and enlightened for having done so. And so... 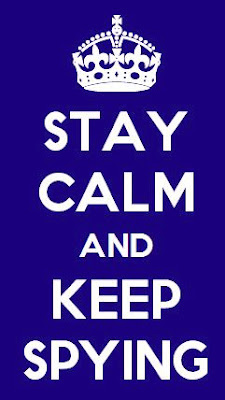