Something's Brewing and Brevity Of Pen


My co-administrator Arimintha recently published a collection of her one-act plays. I asked if she would share something about her experience with writing for the theatre... 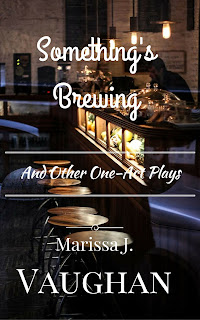 I have been writing one-act plays for over ten years. I was fortunate to get involved with a theatre that would produce them and then lucky enough to have some of my plays produced for The North Park Playwright Festival at the North Park Vaudeville and Candy Shoppe.

Recently, I took some of these plays and some others that I had written and and collected them in book form. It is not a collection of every play I’ve ever written. Such a book would be too long, and there are some that I still probably wouldn’t put in.

A few factors go into how I write. Some involve story, I often start with a kernel of something – perhaps a visual I want to see, an issue I’m facing, or a subject I want to write about. Something’s Brewing was based on a creation myth I had started when I couldn’t sleep one night and then further expanded upon a few years after I had originally wrote it. Have a Nice Death was based on the visual of a Goth cheerleader. It’s In the Cards was based on the idea that Fate was a card dealer.

What I really want to talk about is why I write one-act plays and things to keep in mind when you are writing them.

I write them because they happen to be easier to get produced. The theatre I worked at produced one act plays every month and a lot of playwright festivals are looking for those as well. To have a full-length play produced can be very hard. You often have to either fund it yourself, or be already established. It’s not impossible, but it is much more difficult.

The other reason I do it is because I find that it is all the space I need to get a story across. I have been told I have brevity of pen and when writing one-act plays, this is a good trait to have. Boltin’ and Joltin’ was written for a short screenplay contest. I was given some parameters and a maximum page count. When I looked on the forums, many people were finding it hard not to go over the page count and also had trouble trimming what they wrote. My advice is to keep the parts necessary to your story. You may have a line you love or a subplot that you think is awesome, but check if it supports your story or if it can go without it.  Decide if it is necessary to the story or it's just your ego talking. When there is a call for submissions, you want to give them a complete play, not something that is part of a larger work. Even if it is from a larger work, it must be able to stand on its own and be a complete story.

Keep your staging simple, your cast small, and have a minimal amount of set changes. You only have so many pages to tell your story and a lot of times people will choose your play based not only on the material, but also how easy it will be to stage. A cast of ten or more is unwieldy. Intricate sets and lots of set changes are not always feasible. When I was directing for some playwright festivals, I would go through the first page and look at how many actors I would need to work with. Because these were plays that were less than 10 minutes, anything with more than four characters or more than one set would get put into the pile that wasn’t going to get read. There may have been some really great plays in there, but because of limitations, they had to go to the side.

The last part is about formatting and following instructions.  If you are submitting for a specific venue, follow the instructions given. The quickest way to be put into the rejected pile is to not follow instructions. In terms of formatting, if you are going to direct them yourself or they are being produced at a theatre that does not have hard and fast formatting guidelines, you can mostly make your own. The main thing to remember is to make it easy for the actors to read and make notes on. If submitting to a more mainstream venue, I would recommend using software like Celtix. It is a free program and has tools for various formats such as stage plays, screenplays, radio shows, etc.

I enjoyed very much writing these and rewriting them for this collection. As I read through them, some of them took me back to my early 20’s, which sometimes seems like a lifetime ago.  I wrote these to be easy to stage in smaller theatres which don’t have a lot of resources. Some of these I directed and had a specific theatre in mind while I was writing. Some I wrote and were produced later and then it was up to the director to decide how to stage them.  All of them were written with the limited resources of small theatres in mind and I hope you enjoy them.