When I was a lad, my parents used to drag me to one thrift store after another. I did not resent these regular outings into the realms of cast-offs and other people's junk. Not at all. While my mom and dad were looking for who-knows-what (I really paid no attention), I was scarfing up paperbacks, comic books and old magazines, most of them for no more than a nickel or a dime--well within my meager budget. I especially liked finding copies of Galaxy, a science fiction magazine that started publishing in 1950, founded by an Italian company looking to break into the burgeoning American SF market. I liked the stories, but I was especially attracted by the covers, which were quite often very humorous...at a time when humor was as rare in science fiction as romance.

I don't think I ever read an SF story where the characters actually turned out to be Adam and Eve (though I think there may have been a TZ episode like that) but that did not stop an artist from painting a picture that evoked the biblical story (left). Likewise, the cover on the right was strictly for laughs since it did not actually illustrate a story. Despite the little green man and the alien cow, it readily calls to mind the old image of a cow being hit by a train or a truck (farmers used to purposely put old cows on the tracks or in the road) for which the irate farmer would demand fare compensation. It was about this time that I realized that whenever science fiction writers were writing about faraway worlds, strange alien beings or civilizations visited by time travelers they were not writing about those things at all--they were writing about us, about our world and about the events of our own time. That's one of the reasons why old science fiction at times seems dated, not because of the writing style but because the social conditions which inspired those stories have changed. 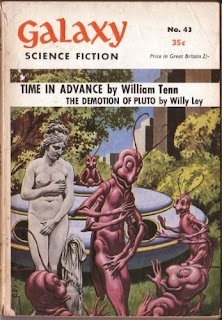 This cover by Emsh was one of my favorites, the aliens taking something that would be considered a work of art and gently mocking it. Nothing malicious or racist in it, just a reminder that the way we see things is not how everyone else sees them. It is a lesson I learned long ago and took to heart. It's a reminder not to take oneself or one's beliefs too seriously or to expect others to see things as you do. The world would be, I am sure, a much nicer, much calmer place if we would just get over ourselves and not see every slight, real or imagined, as a reason for a declaration of social or cultural war. Science fiction was really good at pointing out human foibles because they could approach the subject by a side door, so to speak, and get people to agree without really understanding what they were agreeing to, until it was too late. David Knight, my English teacher in 7th grade, told me: "If someone complains that a science fiction story is maligning some group or person, all the writer has to do is deny it--no, I'm not writing about anyone except these giant intelligent insects that live on a planet I made up in my mind." It was another lesson I took to heart back when I started writing in earnest...which, oddly enough, was back when I had Mr Knight as a teacher. I don't write much science fiction these days, except for the steampunk novels, but in all my writing I try to keep in mind that when I create characters and groups they are always more than mere words on paper, even if I don't realize it at the time. 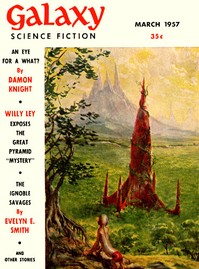 The last Galaxy cover I want to share is not a humorous one, but one which grabbed my imagination and remained in my mind. I really liked the image of a rocketship, probably on a planet far from Earth, which landed so long ago that an alien jungle has started to claim it. When things get caught in my mind, they tend to percolate, sometimes for decades before they come to the surface in some story. For the ancient spaceship, it took more than thirty years to find its way into a story. It became the subject of a quest in a story called "Beneath the Eye of God," which mixed elements of the Crusades, Indian mythology, the Jewish Diaspora from England in the Middle Ages and an article I read about planets existing between galaxies. It was part of a loosely connected series that I called Tales of Lost Earth, a time when Terrans are so dispersed that even Earth has become a legend. When I published a collection of my stories a couple of years ago--Beneath Strange Stars--it was one of the ones I included. So the spaceship came from Galaxy, the world came from an article I read, but what about the Crusades and the Jews being persecuted in England? If you're guessing Ivanhoe, you'd be correct, but Ivanhoe, by way of an episode of Leave It to Beaver. It's funny how things get processed by the mind.
Posted by Ralph E. Vaughan at 14:34