We Were Hunting a Monster

There were three of us crammed into an old yellow VW Beetle hurtling at breakneck speed through black woods. It was the early Seventies, and we were being chased by monsters.

I've written elsewhere in this blog about being a UFO investigator for the UFO Research Bureau (UFORB), but I don't think I mentioned that we worked out of office space leased by an organization called the World Truth Institute (WTI). It was quasi-religious but mostly philosophical, the sort of thing that's called New Age nowadays. It's founder, Warren B. Knox, had written a book called Moroni's Message, a kind of adventure novel with religious overtones, the sort of thing that would become popular years later when Raiders of the Lost Ark was a box office hit. 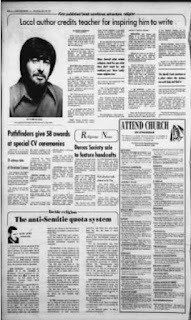 Like us (me, Steve & Gary), Warren was a Chula Vista guy. When his book was published, it got a nice write up in the 26 April 1973 issue of the Chula Vista Star-News, for which I was at the time still writing book reviews. I did not, however, review Warren's book. Mine was an actual book review column, called Etc, and the publisher, Lowell Blankfort, wanted Warren's book to be reviewed and him interviewed by the Religion editor because of the religious and metaphysical aspects of the book.

Warren was a smart fellow, but his concerns were so esoteric that we at times hardly knew what he was talking about. As UFO investigators, we were mostly concerned with lights in the sky whereas Warren was looking quite a ways beyond. We really didn't get involved with WTI or its work. What we appreciated was that WTI sub-leased back office space from a realtor in a set of old stucco buildings (built circa 1930) at the southwest corner of Third and H Street, and that we got to use that space to store our files and to have our meetings on Wednesday evenings. As I wrote, we were investigating the UFO Phenomena, each of us coming at it from our own particular points of view, but that didn't stop us from going off on a tangent now and then, especially if we could tie it, even tenuously, to Flying Saucers. One such tangent was Bigfoot. While Steve held firmly to Donald Keyhoe's machines-from-outer-space theory and that the Ufonauts were likely gray, green or blond-haired Nordic aliens, Gary thought it was more than possible that the Flying Saucer pilots, at least some of them, were Bigfoot (Sasquatch) creatures and that sightings of the hirsute monsters were actually UFO sightings misinterpreted. 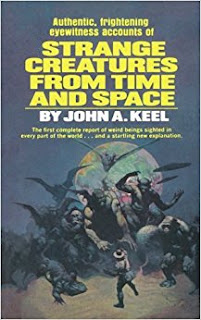 Gary was not alone in this idea and one of its proponents was writer John A. Keel (author of, among others, The Mothman Prophecies and Our Haunted Planet), whom all three of us idolized. If Keel thought a Bigfoot alien was a possibility, we really couldn't mock Gary for believing it...well, we mocked him a little. As I wrote, we usually did not involve ourselves with WTI affairs, but Warren was always on the lookout for things that might interest us lads, and he had contacts with people in San Diego County that we, being mere callow youths, did not have.

One Wednesday evening, Warren showed up for one of our meetings, not unheard of, but unusual. He told us about a man he knew who lived in the East County, which back then was mostly undeveloped. The man, Dr John Bador, had written Warren a letter (he gave us a photostat for our files) that told a very strange story. Dr Bador, a retired medical man, owned a ranch up in the mountains that was fenced in around his ranch house, a step he took because of the large packs of coyotes that roamed the area at the time. On several nights, he observed a tall (7-8 ft) creature approach his fence and observe his house. He described it as being covered with thick fur except on its hands, feet and face...and, yes, the feet were big. Monsters, whether they were aliens or Missing Links, really did not fit into Warren's world view, but he thought we might be interested, especially since the East County had long been a UFO hot spot. We were interested, some more than others. That was how we came to be careening wildly through the dark in Gary's yellow VW Bug hunting for monsters. or being hunted by them. 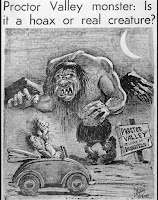 I should point out that none of us were strangers to monster lore. As long-time Chula Vista residents we had heard about the Proctor Valley Monster all our lives. Just what was the Proctor Valley Monster? Nobody really knows. Some claim it was goatish or like a bull, others more humanoid, but there was no dissension about its reality. Well, maybe a little from some quarters, who unwisely mocked the PVM.  Proctor Valley was due east of Chula Vista. It has since been conquered and annexed by Chula Vista, part of the extensive Eastlake Development, but at the time it was wild and undeveloped. A drive along Proctor Valley Road was a journey into mystery and danger, especially at night...and, yes, we had made the trip at night in Gary's VW Bug. No monsters though. Having hunted for it, we thought ourselves well qualified to tackle this new monster. We were determined to find Dr Bador's monster (or Gary's UFO pilot). The only thing we did not consider in our impetuousness was what we would do if we actually caught the creature. Yes, we had much in common with dogs who chase cars.

Late one Saturday afternoon we set out for the East County, planning to enter the brush not far from Dr. Bador's ranch. The good doctor had been warned by Warren we would be in the area, just so he would know not to call the Sheriff or to shoot us. We had everything needed for a successful monster hunt -- tape recorder, camera, map, flashlights, sodas, candy bars and beef jerky. We entered the brush following a barely passable track. When we reckoned we had reached a good spot from where we could hike down to within view of Dr. Bador's place and still keep the car hidden, we waited quietly as darkness gathered around us.

Slightly after midnight, we heard something (maybe a lot of somethings) moving through the woods. They were not approaching the fence, but rather were closing in on Gary's car. Nervously, we made our way back to the Bug, rolled down the windows and listened to the movements of things we never saw. I should point out here that all three of us were City boys. I had been a Boy Scout, but sleeping in a tent at a Boy Scout camp, surrounded by the amenities of modern camping, is much different than sitting in a car, surrounded by totally dark woods with monsters closing in. We were so concerned about keeping quiet that none of us even bit down on a Hershey Bar, lest the snap of the chocolate give us away. The sounds in the woods grew fainter. Then something massive and dark crashed through the brush and landed very close to the car. There may have been some growling involved.

I don't want to say that any of us panicked. I know I was not panicked. Even though more than four decades have passed since that night, I'm pretty sure I was calm and cool during the entirety of the startling intrusion. But I can't really speak for the others. There were screams, but I'm pretty sure mine was not among them. Let us merely agree that there were screams and that some level of panic was involved. I don't want to point fingers, of course, but I will mention that Gary was driving and that 1.5 seconds after the advent of whatever-it-was we were in motion, jouncing at perilous speeds along trails we could not see, After maybe ten minutes of blind flight (we were certain we heard sounds of pursuit) we burst into the midst of a ranch. Unfortunately, it was not Dr Bador's place and this rancher had not been warned to refrain from firing his shotgun. With the boom loud in our ears, we zoomed up the ranch's access road, hit the main county road, and didn't slow down till we reached the familiar streets of Chula Vista.

Our report, which we shared with WTI, indicated that after extensive research, including an on-site inspection, we did not find any conclusive evidence of either Bigfoot or UFO visitation. We came to the conclusion Dr Bador was either the victim of a hoax or had misinterpreted natural phenomena, something we often came across in our investigations. We marked the case CLOSED. That was our story, and we stuck to it.