"I was kidnapped by flying saucers!"

When I was growing up, flying saucers were very big, not just in pop culture (films, comics, television sci-fi magazines), but﻿ in the news as well. You may sneer and think, Yeah, but not everyone read the National Enquirer, but I mean such outlets as the New York Times, and even Look, which had a slick newsstand special issue: 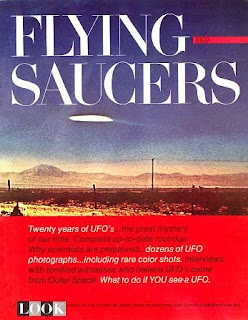 I remember thinking, I'd really like to be the person to figure this out, but there's no hope of that -- after all, whether from outer space, Atlantis, Inner Earth or other dimensions, it won't be a mystery much longer, not with the CIA, the Air Force and investigators going after it hammer and tong. It's what we all thought. Not a single one of us even remotely considered that any mysteries would remain unrevealed well into the 21st Century. And yet here we are...

You may ask what flying saucers have to do with reading, or books. People like me, who were  pulled into the world of flying saucers (never did like the term UFO) were seduced not by newspaper reports of lights in the sky or of aliens -- I was in high school before I learned most people thought aliens came from Mexico -- but by books. The most influential book among us saucer heads was Flying Saucers: Serious Business by Frank Edwards. Its effect came not from it being so well written or meticulously researched but because it was available through the Scholastic Book Club; for students, the SBC represented a way to get books their parents would not buy otherwise -- if if was being offered through school, well, it just had to be okay. 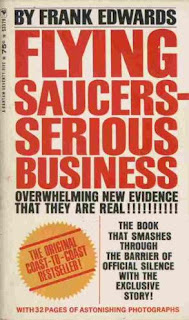 This was hot stuff! One of the best aspects of this book was that it gave a great historical background to the flying saucer enigma, showing us that it did not all start with Kenneth Arnold's sighting of strange aircraft above Mount Rainier in June 1947 or, as some of us thought, with the Roswell crash the following year. Not only did it go farther back in time, it went much farther back in time; according to Edwards flying saucers had been reported in ancient times, and John Keel, another icon of the era, asserted the flying saucer mystery had been with us since the beginning, an idea he posited in Our Haunted Planet and The Eighth Tower.

These books were a great jumping off point for starting our own saucer clubs, conducting our investigations, solving the greatest mystery, and writing our own books, becoming world famous and making millions of dollars from our best-sellers. We did not write the books, but that did not stop us from mailing out our newsletters and blurry magazines. Computers were huge machines filled with vacuum tubes, calculators were dreams, and dry-process photocopying was coming. On the other hand, we had mimeograph machines, and we weren't afraid to use them. And use them we did, writing reams of reports, speculating wildly and publishing our own work as fast as we could turn a handle. And that wonderful, intoxicating smell... 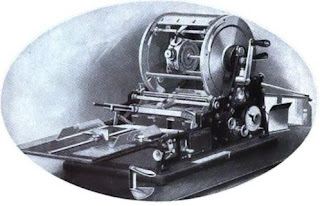 This was a time when several new flying saucer books appeared at the newsstand every month, as did magazines of various types -- slick, pulp, specialized, tabloid and digest. It's not very surprising, given the media flood, that I was sucked into the flying saucer maelstrom; more surprising is how long I stayed, since most moved on to some other fad after a book or two. I was an investigator for the UFO Research Bureau (which was just really me, Steve and Gary), and I sent reports, observations and theories to all the journals and basement-mimeographed newsletters of the time. And, of course, I worked on my book which explained the Great Mystery once and for all, as well as tried to break into the big magazines like Saga, Look, Life, Fate, and Scientific American -- yeah, I was naive.


Hundreds of fantasy, science fiction and mystery stories, and my first piece of professional writing (hey, there was a check for $100!) is a research/opinion piece about flying saucers. I did not care! I was published! And there were other magazines over the years: 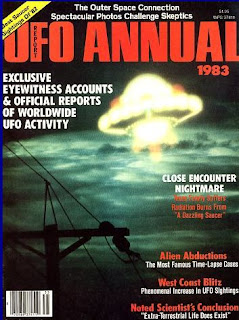 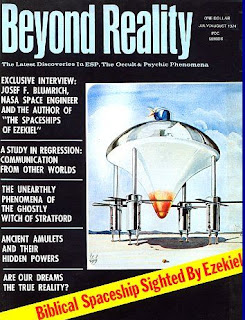 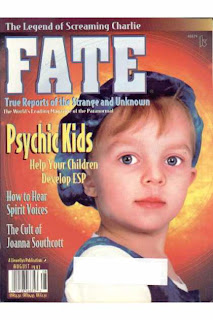 But also, over the years, it became a minor writing sideline for me, often written with as much amusement as wonder, as much nostalgia as inquisitiveness. Mostly my writing efforts took me into genre fiction, and I knew things had changed when I noticed the content of my library had changed. While stationed in Germany, where I wrote the article for Beyond Reality, I had to prepare my library for shipping and discovered my books on flying saucers, the Bermuda Triangle, Men in Black, the Philadelphia Experiment, aliens, ghosts, haunted houses and other things that went bump in the night outnumbered all other books by a factor of five to one; just twenty years later, another accounting of my library informed me that what had once formed the lion's portion was now a small fraction of the whole. But it wasn't news, not really, for I'd written and published just about everything except flying saucer stories for years. I had been kidnapped by flying saucers, but I eventually made my way back, just a bit later than others who'd taken passage to the second star on the right.

The flying saucer mystery is still a mystery, perhaps even more than before simply because it has gone on so long as to become a permanent part of our culture. While we in the first heyday of the unknown were passionate about finding the solution, investigators nowadays are content with the mystery being a mystery. If if were to go away, what in the world would they do with themselves, or that vacation planned for Area 51? I don't think they want to find out. 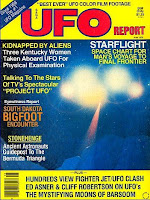 There is a big difference between then and now which has nothing to do with the mystery itself. Most of our information came from the printed word, mass market books and magazines from big publishers; or one-man publishing houses issuing 500 copies or less (collectors items now); or newsletters cranked out by geeky kids with coke-bottle glasses using their allowance money and meeting to discuss the latest MIB sightings. Nowadays, people get their UFO fix (the word "UFO" has triumphed despite my best efforts) from the television -- History Channel, Discovery, Military Channel, Spike, SyFy, Chill Network, USA, TNT, and more alphabetic cable outlets; and the nefarious Men in Black, just a comedy. Maybe the kidnappings continue, but those who journey beyond the sky now take a digital camera with them, not a typewriter. Too bad...they don't know what they're missing.
Posted by Ralph E. Vaughan at 14:54

Email ThisBlogThis!Share to TwitterShare to FacebookShare to Pinterest
Labels: beyond reality, fate, flying saucers, ufos, war of the worlds