The Golden Age of Reading

The more I consider, the more strongly I tend to believe the Golden Age of Reading was 10. At that point in my life, I had all the mental tools needed to read any book, the inquisitiveness to search out the meaning of what I did not quite yet understand, and the quality of vision to be equally dazzled by the old and the new, for to me they were the same thing.

Of course, I write here of another time, another culture, when schools actually taught the reading skills needed to excel, when books and magazines of all sorts were easily available with even the most modest allowance (mine was very modest -- I haunted thrift stores where old comics were a nickel and pulps a dime), when parents could purchase a set of encyclopedias without having to sell the first-born (lucky for me, but selling the second-born would have been okay), and the youth of the time had so few other distractions -- just sports, trouble-making and that flickering silvery screen called television.

Now, don't get me wrong. Back when the dinosaurs ruled the earth (as my children and their children believe) was not an idyllic time for the prolific reader. No time has been -- hey, don't get your nose caught when you close that book; you have to forgive my son but he swallowed a dictionary when he was young; we have an odd number of people, so to make the teams even why don't you go read a book; you're book-smart, but dumb at everything else. As today, the reader has to persevere against all sorts of unkind remarks from friends, family and jackasses...some thing just don't change.

People do not change, and are just as good and evil as they have ever been, but society has changed around us. Some, like me, are not very good at adapting ("change is bad"), but most other people seem to the proof from which Darwin always searched. Nastiness, duplicity, mendacity, sloth, irresponsibility and brutality are now survival skills; so, also, are manual dexterity, multitasking, memorization of processes, and an ear for technical jargon. Me? I just read and write, and I'm not bad at arithmetic, problem solving, and connecting the dots -- not exactly the survival or advancement skills they used to be in business and civic life.

Not only has reading taken it on the chin due to social changes, but reading just for the sheer pleasure of reading has  been kicked in the jewels by all the distractions of the modern world -- television is now in color, hi-def, 3D and has 900 channels; computers and the internet can consume literally thousands of hours of your time and give very little in return; social networking can give you 5,000 BFF, all who want your attention; the death of faith and the rise of fear causes many people to engage in endless vapid social rituals; rather than read, people zone out with i-pods in their ears, like the ubiquitous shells in Fahrenheit 451; and  the would-be reader is not even safe from the government as Michelle Obama and other intrusive do-gooders urge you to get up and dance your fat away. 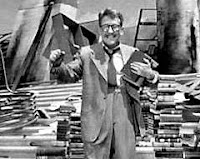 As a kid and young person growing up when all the obstacles to having time enough at last to do all the reading I wanted, the ultimate wish-fulfillment episode of the original Twilight Zone was the one in which Burgess Meredith happened to be down in the bank vault (reading during lunch hour, of course) when The Bomb hit. No more boss, no more wife, no more co-workers, no one at all to keep bank clerk Henry Bemis from engaging in that one activity that made life bearable -- reading. Not even the death of civilization could stop the little man from rising to the top of the evolutionary heap; suddenly, when all else had been taken away, reading became the one activity which could keep Mr Bemis sane, keep him from putting a gun to his head. In a nuclear flash, Mr Bemis was transported to a golden age of reading and he had the enthusiasm and vigor of a ten year old. I was shocked speechless when he broke his glasses, and felt such pity for the abject little man such as I have for no other person, before or since. Now that I have big thick trifocals I think I identify with poor doomed Mr Bemis more than ever.

When I think about how the golden age of reading was 10, at least back in that age before others felt they knew best how to live my life, I wonder about the readings habits of the contemporary youngster. Is he reading? Possibly not, but if he is, it may be little more than required reading at school, the sort of didactic stories and essays chosen by committee, the "right" sort of reading designed to produce a more tolerant, more malleable child. Books are being yanked right and left from school libraries by officials who are as well-meaning as they are fearful of responsibility, and political action groups such as CAIR are seeking to remove books from private ownership. Take out A Study in Scarlet, the first Sherlock Holmes story, because it might offend Mormons; remove Little Black Sambo to keep from offending Jesse Jackson, never mind that tigers come from India, not Africa; destroy all the books by Joseph Conrad (colonialism), Edgar Poe (morbid!), and the writings of the Founding Fathers (dangerous). Instead, give that ten year old books like the execrable Skippyjon Jones series, the tolerant Bernstein Bears, and The King Who Wanted to be a Queen. Golden age? Not of reading or anything else it seems.

The Golden Age of Reading is no longer 10.

Today's youth do not read for pleasure, only by assignment, and only from approved books.

The encyclopedia has been supplanted by Wikipedia, dictionaries by Merriam-Webster.com, and big books by little screens.

By the way, folks, Kindle is evil.

And change is still bad.

(first posted on "The Hopeless Bookaholic")
Posted by Ralph E. Vaughan at 15:06