Why Chase the Whale?

We all have books to which we return on a regular basis, stories that in some way affect us as no other has. The reasons we latch onto a particular book are as various as there are readers, and can be no more complicated than it was a treasured book of one's youth (Go Dog Go or Mike Mulligan and His Steam Shovel), or teen-years (Catcher in the Rye or the Lord of the Rings trilogy); or that it changed the direction of our thoughts (Atlas Shrugged or In Cold Blood); or simply because it's a darn good read or has such compelling characters (The Moonstone, any of the Sherlock Holmes tales, or A Confederacy of Dunces). Our continual attraction to some books, though, may be a bit more mysterious or complex, confusing even to ourselves. For me, one such book is Moby-Dick, by poor Herman Melville.

Every few years, I return to this book, just as Ishmael regularly puts out to sea, and I delve into its mysteries, just as the Great White Whale sounds the dark deeps; and I pursue its meanings just as surely as mad Ahab broods in his cabin ill-lit by whale-oil lamps, charting the pathways of the preternatural leviathan who wounded him so grievously.

There is no other American novel that approaches Moby-Dick in the grandeur of its language. It's a great book to read aloud, sort of like the King James Bible with whales. When we enter the Spouter Inn, it is very comforting to us, and we realize this place is the precursor of all the inns ever portrayed in fantasy fiction, from The Inn of the Prancing Pony in the village of Bree to Callahan's Crosstime Saloon. When Father Mapple preaches from the bowsprit pulpit of the Whaleman's Chapel in New Bedford it really is like listening to the voice of God issuing from the depths of the sea; when I first read the book, I imagined Father Mapple as an Orson Wells figure, even before I saw the John Houston film.

Call me Ismael. Has there ever been a more eloquent opening to a first-person tale? Usually, a writer introduces a narrator through  embarrassing self-examination (Philip Marlowe even tells us of the clocks on his socks in The Big Sleep), has someone else ask after his name and nature, or just ignores character details outside the plot elements (Pronzini's Nameless Detective springs to mind, as does the anonymous spy narrator of Deighton's The Ipcress File [called "Harry Palmer" in the film]). With Ishmael, we have his name in a three-word sentence; we also have something of his character, for names in fiction are not random or coincidental -- he is a wanderer, an outcast, a man with no inheritance other than what he may glean from this world.

I suppose all of us, except, perhaps, the most sedate of society's wards, knows the pain of Ishmael, the descending gloom that makes us follow funerals, the fermenting anxiety that so unsettles us that we either have to take off  for parts unknown or knock people's hats off. But these days we are not as fortunate as was Ishmael -- there are no "parts unknown" anymore, no setting off to sea on a whim, not even the opportunity to make a fresh start where no one knows your name and you can introduce yourself as, "Call me ________." All-pervasive governments, a world where one's "papers" better be at hand, and a general and quite justified xenophobia have put an end to that kind of outlet. Perhaps that's the reason why people today simmer in their misery, become obnoxious activists on a jihad to change society, seek the blinding euphoria of chemical or electronic distractions, or simply go postal. Today, Ishmael would be a Bartleby in the dead letter office, a homeless wretch or a body in the morgue, so Moby-Dick becomes a passport to a freer time, when people were not slaves to society or the law except through choice; I suppose in future editions of Moby-Dick, students might have more difficulty understanding the concept of Ishmael's Dilemma ("personal choice") than readers do now wrestling with the Calvinistic concept of predestination. 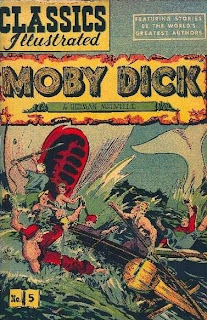 And then there is Queequeg, Ishmael's boon companion as they seek to go whaling. This tattooed "son of Satan" is really a simple man, whose life is controlled by gods and fates, who really can see what's coming his way through a roll of the bones. In a sense, he's the prototype of "the other," that dark companion to the white protagonist who has always been a part of American literature, even before Jim and Huckleberry Finn rafted lazily down the Mississippi; we still see it today in that most popular of modern diversions, film -- Riggs and Murtough, John McClain and Zeus Carver, Detective Carter and Inspector Lee. There is a kind of envy we have of Queequeg: while Ishmael has to prove himself to the owners of the Pequod and settle for the tiniest of percentages, all Queequeg has to do is throw a harpoon, securing for himself a master harpooner's share. Oh, if life were as simple for us as it is for unlettered Queequeg -- roll the bones, be a friend to Ishmael, and harpoon the whale.

Of all the characters in Moby-Dick, Captain Ahab is the most familiar, and the most frightening. We either know or we are him. He is the scheming supervisor who watches us as we work, the boss who sits behind the closed door of the corner office with his arcane flowcharts as he pursues the profit that will either raise him to godlike status or destroy him. Or maybe he is you, pursuing some goal you cannot explain, not even to yourself. Ahab's pointed and pointless quest not only destroys himself but takes everyone down with him -- Bernie Madoff comes to mind, as does Goldman Sachs, Muammar Qaddafi and Barack Obama. Under Captain Ahab we always think we're pursuing something worthwhile, but then discover we have a whale by the tail and just can't let go. 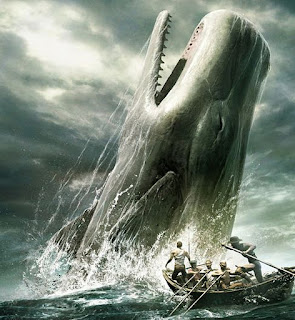 And that brings us to the fourth character that takes me back to the novel time and again -- Moby-Dick himself. Even though the big fellow does not appear until late in the story, and briefly, his presence is felt from beginning to end. Other people obsessed with Moby-Dick have described the whale as fate or God, but I think I look upon him as a long-suffering soul who has finally reached the end of his patience with his tormentors. He is the faithful employee who has always been there for the boss, who has always allowed everyone else to live off the fruits of his labors; he is the worker who always does everything right and yet is ever vilified with unfounded charges of wrongdoing; he is the competent servant who who is always the target of the psycho human resources malefactor eager to make a name for himself. Ultimately, Moby-Dick turns, rams the ship and takes nutty Ahab to the fate he so richly deserves.

While I'd like to be able to say, "Call me Ishmael," or solve my problems like Queequeg throwing a harpoon straight and true, or even have Ahab's illusion I am the master of the ship of my life, the captain of my soul...I think, more often than not, I may be the Whale, and not in the Vegas sense. Still, as taken as I may be with this novel of mirth, madness and predestination, I can take a measure of comfort there are others whose obsession makes mine seem a casual interest... 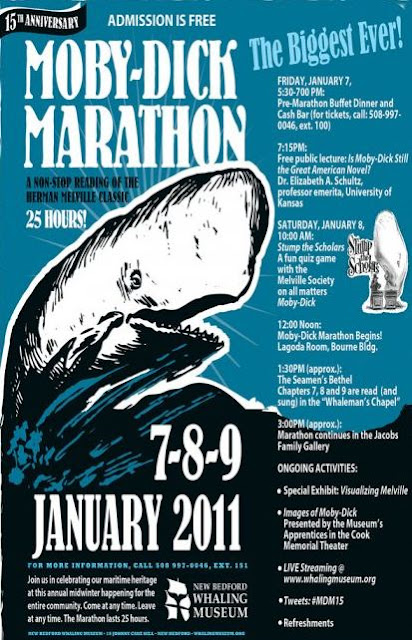