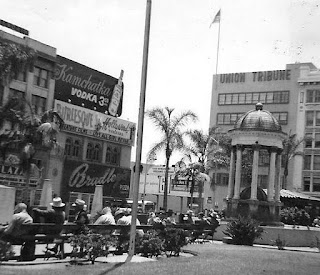 It's sometime in the 1960s, I'm Downtown and I got money in my pocket for a change instead of lint -- I am a very happy boy. Happy not that I have money, or that I rode the bus without getting lost or mugged, or that I don't have parents peering over my shoulder. Nope. I'm happy because I have about thirty bookstores from which to choose, from the hole-in-the-wall shop where the magazines hold the faintly pleasant scent of LSMFT to the venerable three-story Wahrenbrock's to the vibrant Paperback Book Land. Well, maybe I was a little happy about being sans parents, for I could buy the kinds of books that Moms and Dads just don't get. Oh, no, not that kind of book, just a little...lurid:

Ace Books, founded in 1952 by publisher Aaron Wyn, could easily be credited with creating the specialty science fiction & fantasy paperback book market. While there had been small press publishers of speculative fiction for a few decades, they had all been hardback-oriented, chasing respectability; and though other pocket book publishers had issued sci-fi tomes, they were just part of a varied booklist. Even when other publishers, like Berkley, Monarch and Ballantine joined in on the bonanza, Ace still stood apart. Great stories (usually) by great writers (sometimes), but always great covers...wonderfully garish, even with a touch of grand guignol at times, but always delightfully lurid. Ace was bought up by Grosset & Dunlap in 1972, by G.P. Purnam's Sons in 1982, and by Penguin Books in 1996; while Ace retained its distinctive look for awhile, it eventually became a well-behaved corporate stepchild. Unfortunately, its lurid covers and low prices, are now, like everything else good, part of a world now long gone. Pity.
Posted by Ralph E. Vaughan at 22:12