Writing of the (original) Star Trek

The series Star Trek began in September 1966 and ended June 1969, and that should have been the end of it, but as everyone knows, it wasn't. The series, with its aging starts, returned for a series of theatrical films, followed by a second incarnation, ﻿Star Trek: The Next Generation, which was quickly joined by three television spinoffs: Star Trek: DS9, Star Trek: Voyager and Star Trek: Enterprise, along with theatrical films about the spin offs. Think of it: forty-five years have elapsed since it appeared, many of the actors have passed away, and yet we are still entranced by the characters and the actors of the original series. 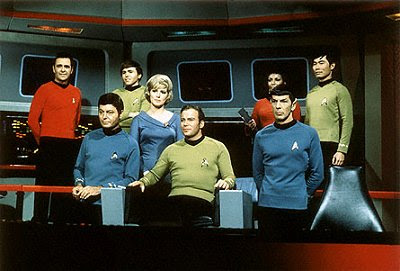 Of all the people obsessed with Star Trek: The Original Series (ST:TOS), perhaps we should not be surprised that one of them is William Shatner. After all, it's been said, only half in jest, that William Shatner is Captain Kirk's biggest fan. He himself has written five books about...himself.

In addition to his Star Trek writing, William Shatner has written an autobiography, at least up the moment he was writing his biography...I wonder if he included the writing of his biography in his biography since that was what he was working on, up to...now.  He's also written novels based in the Star Trek universe, in which he had the unique opportunity to write further adventures of the heroic Captain James Tiberius Kirk, which is, of course...himself. As much time as he has spent writing about his journey through the worlds of Star Trek, both as actor and character, I think William Shatner is last person in the world who should tell Trekkies, or Trekkers, as they call themselves, to let go of Star Trek and...get a life.

William Shatner is not alone in his fascination with himself. His life, on and off the set, was the subject of Dennis Hauck's book, Captain Quirk: The Unauthorized Biography of William Shatner; the same author also wrote the little known William Shatner: A Bio-Bibliography. Another paean to the godlike Shatner is Robert Schnakenberg's prestigiously entitled The Encyclopedia Shatnerica: A to Z.

Equally famous is Captain Kirk's first officer, Commander Spock, an inhabitant of the planet Vulcan, the son of a Vulcan ambassador and a Human mother. That "half-breed" nature was used to good effect in the original television series, as well as the later films, to examine the idea of a man as much at conflict with himself as he is with the universe around him. Because Spock is as much as outsider on Vulcan as he would be on Earth, Trekkers, especially the misfits of society, were quick to bond with this ultimate outsider. Oh, yes, and then there were the pointed ears... 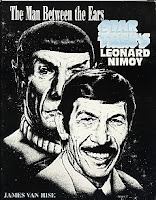 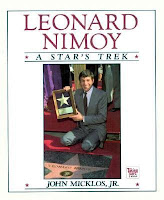 ﻿Commander Spock gave fans the oft-quoted tag lines "fascinating" and "that is illogical." If I had a bar of gold-pressed latinum every time I heard (or said) those lines, especially with one eyebrow raised, I'd be richer than the Grand Nagus (if you don't know the Star Trek reference, you'll have to look it up; it's the only way you'll learn) or beyond the dreams of Quark.

As the late George Reeves (murder not suicide) came to be identified with the character Superman through his film Superman and the Mole People and the extremely popular television series, or Adam West with the character of Batman (West was passed up for a role in the racy Valley of the Dolls because he was deemed too wholesome), Leonard Nimoy became quite identified with his Star Trek character, one of the reasons he quickly accepted the role of Paris on the series Mission: Impossible, taking Martin Landau's place.

Leonard Nimoy insisted he was not a freak, that he was a real man with real ambitions, that he was a serious actor who could appear in serious roles; more than anything else, though, he wanted people to know, to admit, to believe I Am Not Spock. Well, we all knew better; we all knew who he was, and a favorite line of every fan was, "Say, isn't that Spock in that role?" The gibe came up in the cult favorite J-Men Forever!, when a character asks his partner about a Martian with a metallic hood: "Say, isn't that Leonard Nimoy?" and the partner replies "Don't know; can't see his ears." Yes, it was a clip cut from Republic's Zombies of the Stratosphere. Of course even Leonard could not deny the obvious forever, and eventually he admitted what his fans knew all along, entitling his next autobiographical effort, I Am Spock. Well, duh.

The other actors who weekly saved the universe aboard the USS Enterprise either wrote their autobiographies or were the subject of books by professional writers...though sometimes their characters took a more prominent role than the actors...

For example, James Doohan was respected as an actor, but his character, Commander Montgomery Scott, was beloved, even revered. Once, while touring NASA for the launch of the shuttlecraft Enterprise, he was approached by technicians, physicists, space scientists and other professional braniacs, who told him that they were inspired into their present position by his role as the miracle-worker of the Enterprise.

Unhura (Nichelle Nicols), the ship's communications officer, and the recipient of television's first interracial kiss; Sulu (George Takei), the helmsman and finest fencer in Star Fleet; Pavel Chekof (Walter Koenig), navigator of the Enterprise and youngster cast because creator Gene Roddenberry thought his haircut would attack young Beatles fans; Doctor Leonard McCoy (DeForest Kelly) who was known as much for his medical prowess as his rifts ("I'm a doctor, dammit, not a brick layer); and even Yeoman Janice Rand (poor, ill-fated Grace Lee Whitney) who had an unrequited crush on Captain Kirk, had their moments in print:

But perhaps the greatest fame that can be claimed by the characters of Star Trek or any television show, and an indication of how infused they have become with the consciousness of American society, is when they appeared on the covers of that iconic magazine TV Guide, published in a single week, in honor of the show's 35th anniversary: 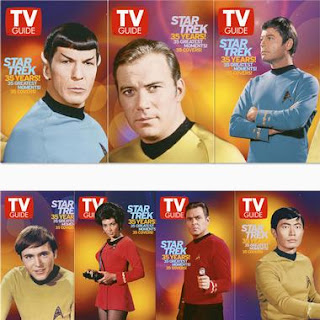 Note to fellow biblioholics: It was hell getting all these covers the week they were published, going from store to store, enduring the smirks of clerks who knew you were one of those people. Finding them now is not impossible, but you will have to seek them through a specialist, rather than a person who deals in regular back-issue magazines. Thank goodness for the internet.
Posted by Ralph E. Vaughan at 15:00