I Hate to Love Umberto Eco

He wrote an historical murder mystery, The Name of the Rose, (1983) which I loved and hated. William of Baskerville, a monk, and his companion travel to northern Italy to take part in a conference about a religious controversy. As the English monks arrive, the monastery is disturbed by a suicide, the first of several deaths. The Abbot asks William to investigate. As a reader of mysteries and a student of theology, I connected to the novel on several levels, but it was very dense prose, not the light flummery we expect from mystery writers. Still, it was a wow of a first novel.

His next, Foucault's Pendulum (1989), almost made my head explode, as in the film Scanners. Three underemployed editors, bored with work and with a penchant for whimsy (been there more than once myself) invent a conspiracy involving the Knights Templar, lost treasure, world conquest and myriad secret societies. The intricate plot required a large measure of disbelief suspension, but what drove me to distraction were the characters. In one instance, an editor begins playing with his word processor, treating us to page after page of wordplay, nonsensical letters exploding like out-of-control carcinoma. The jest achieves both comic and cosmic proportions as all hell breaks loose, quite literally. In a climax of chaotic cacophony, everybody makes an appearance, even Cthulhu, and I can't be sure I wasn't there too. I was lucky to escape the book alive, at least I think I did. I made the mistake of loaning the book a friend, and his head did explode; even before that happened, though, I swore I would never crack open an Umberto Eco novel ever again.

Then Eco made me a liar with The Island of the Day Before (1995). It's a simple enough plot -- a chap is marooned in the 1600s on an island near the International Date Line, wants to get to the island on the other side of the line, but can't swim. So he spends the entirety of the book obsessing about his life, especially his evil twin who may or may not exist. Of course, none of it might exist at all, at least in a metafictional sense, because it's not the narrator actually telling us the story, but a 20th Century editor who claims to possess the papers but he may be even more fictional than the shipwrecked nobleman. It's all very maddening  So why did I wade through it? I could not help myself. Even in translation, Eco's language is engrossing, hypnotic, alluring; to reject it is like refusing a silk Italian suit...it feels so good. But, still, I sensed he might be playing me for a fool. After all, as a professor of semiotics he knows all about signs and symbols and probably doesn't play fair with readers, and that was why I decided to let this third book our departure point.

And then came Baudolino (2001), set in the known Christian world of the Middle Ages. No, not just the historical venue of the late 1100s/early 1200s, but the actual world as it was known to Christian scholars, the sailors whose maps read Here there be dragons, and the unlettered masses to whom every rumor and tall tale was as real as a television news report is to us. The world was populated by men with the heads of dogs, people with faces in their stomachs, flying carpets, white civilizations in Africa ruled by Prester John, and Grail quests. Because I am a student of history, cartography and the early church, my hand moved of its own volition toward the book; additionally parts of the story were set in Constantinople (now it's Istanbul, but that's nobody's business but the Turks...and maybe some dancing mice), one of my favorite cities of antiquity. I really had no choice but to read it, even though I knew Eco was playing with my mind, in subject matter and venue, in sign and symbol. I let him have his literary way with me in Baudolino, but no way was I going to let Eco sucker me into another frustrating, fascinating, facinorous, fulgid tome. It was definitely my last foray into the finical fiction of Umberto Eco.

The Mysterious Flame of Queen Loana (2005). "Sigh." I see the book at Borders (of blessed memory), sitting sardonically on the lower shelf, mocking me. Though it has his name along the side in letters slightly smaller than those of a billboard, it also has Flash Gordon, Mandrake the Magician, cartoon explosions, an engraved stamp from who-knows-where, and other images of the pulp fiction era to which I am addicted. I realize you can't judge a book by its cover, but you can't ignore it either; I could no more leave this book untouched than could I a Doc Savage novel, a tale of The Shadow or the Spider, or a compilation of Flash Gordon's or Buck Rogers' Sunday comic strips. Eco's lack of fair play continued as I flipped through the book -- I encountered image after image from the pulp magazines and comic strips of the 1920s and 1930s; and then I encountered Yambo, an eccentric bookseller from Milan whose memory is episodic, who tries to recover his lost past through magazines, books, newspapers and comic books. Eco knows not only the secrets of signs and symbols, but apparently lots of things about me...minus all that stuff about Mussolini. I put it off nearly forever, but, eventually, I bought it; I read it, hated it, loved it, was frustrated and fascinated.

Umberto Eco is poised to strike again, this time with The Prague Cemetery, a thriller set in the monstrous and mysterious year 1897, where secret agent and adventurer Captain Simone Simonini is investigating strange events which will affect the future of Europe and world Jewry. As usual, Eco mixes fictional and historical characters with reckless abandon; this time he even brings in one of my ancestors, Diana Vaughan, a descendant of Welsh alchemist and philosopher Thomas Vaughan. Although the book has already been published in Italy, and become a wildly successful bestseller in Mexico, Argentina, Spain, etc., the English language edition won't be released till 8 November 2011, so I still have time to brood: To buy or not to buy, that is the question. Curse you, Umberto Eco! Luv ya, man! 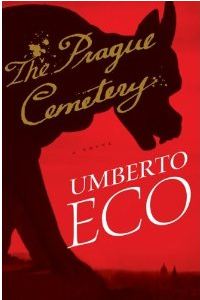 Email ThisBlogThis!Share to TwitterShare to FacebookShare to Pinterest
Labels: baudolino, diana vaughan, foucault's pendulum, the island of the day before, the name of the rose, the prague cemetery, Umberto Eco