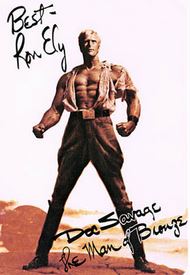 The time: the middle part of the last century.
The place: A swap meet in a small town hard upon the western sea.
The mission: To boldly discover brave new worlds.

A much younger version of me searched for books that day so long ago. Since paperbacks cost a whopping 35-45 cents each, it made sense to haunt swap meets, used book stores and charity shops. Though I was not as far from the cradle then as I am now (which, unfortunately, now puts me closer to the gave), my reading habits were not any less catholic. I was too young to have been poisoned by a government education system that stigmatizes great writers by labeling their works "literature" or "classic," surely the kiss of death; by the same token, I was too young to scorn "trashy" or "hack" novels...though I did have the good sense not to leave I Walk the Bloody Boulevard or Murder Most Foul where my mother would stumble across them. In my search I encountered a novel featuring a painting so photorealistic I did not at first realize it was a painting, but it was the subject of the painting -- the most extraordinary man I had ever seen -- that held my attention, mesmerized me even as I handed over a Mercury dime. The book was The Phantom City, and the man was Clark Savage Jr, otherwise known as DOC SAVAGE! 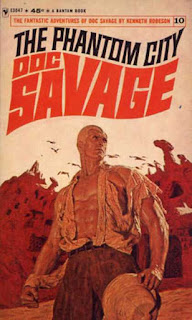 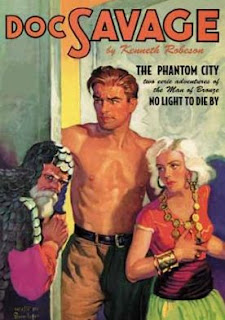 I had found an adventure of pulp hero Doc Savage, whose exploits began began in 1933, in an eponymous Street & Smith magazine, which endured 181 issues. This was not the magazine but a reissue by Bantam. Doc Savage of the pulps (right) differed vastly from the book cover painted by James Bama, but to the shortest, roundest kid in class both images were godlike. In the story Doc penetrated the Arabian Desert by submarine (!): non-stop action, exotic characters and not too much mushy romance. More exciting was the number "10" on the front cover -- there were at least nine others to track down. I found those nine, but I also found much more. 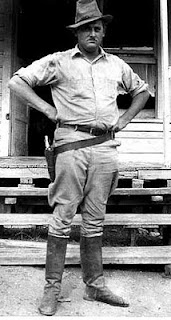 Although written under the pen name Kenneth Robeson, most of the stories appearing in the monthly magazine were the work of prolific writer Lester Dent (1904 - 1959), and it was he who created Doc Savage and his five assistants, the "brain trust" that helped him save the world, solve mysteries and smash crime. In a time of lawlessness and chaos, when bullets and blood filled the streets of America, when dictators were rising all around the world and we had a chance of getting our own (i,e, America as usual), Doc Savage was just the hero for the job. The advantage held by those who lived during that long ago government-caused Depression over those who now endure a government-caused Depression is, they still believed in heroes who were heroes; still believed in law and order, and the possibility of justice in the legal system; and also in the existence of good and evil (as opposed to appropriate and inappropriate), as well as the triumph of the former over the later. The cynical sophisticates of the 21st Century put up with none of that old-fashioned flummery and naivety. Modern heroes, such as they are, are just badder-assed versions of the bad guys. So, how to explain the continuing popularity of a relic like Doc Savage? 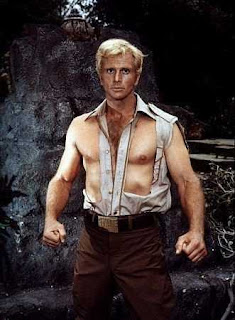 I think it's because hope is not entirely dead in American society, even now. We know superheroes cannot exist in our world (despite antics in Seattle and New York City) but they still remain a popular fixture, and a lucrative one, in print, electronics and film. Because Doc Savage was, and is, a literary hero, he has lagged visually behind those who sprang directly from the graphic world. The one successful attempt to bring Doc Savage to the big screen was the economically disastrous Doc Savage: Man of Bronze in 1975, starring Ron Ely and produced by George Pal. The film could have been much better, but all funding collapsed, and Pal had to rely on anything cheap or free; it's amazing it was finished at all, though some have unkindly claimed it would have been better if it had not. The main trouble, for me, was the portrayal of Doc Savage, but what can you expect when you rely on actors? And here the actor gets no help from tights, cape or mask. He must have muscles, attitude and presence. Pity the poor actor. Besides, Doc's fans already had an image, and it was not Ron Ely. Sorry, Ron. 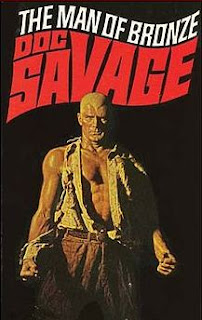 Well, George Pal and Ron Ely got the shirt right, more or less. That torn and tattered khaki shirt was vintage Doc Savage (below-right) and  artist James Bama reused it (left) for the first Bantam reissue, The Man of Bronze, in which the origin of Doc Savage, his fabulous wealth and his organization are explained; it's also where Doc goes a little berzerker on the murderers of his father...in subsequent stories Doc doesn't kill his enemies, though they are quite often hoisted on their own petards, with survivors usually ending up in Doc's upstate hospital where a little brain surgery rids them of their evil tendencies. Bama's model for his mid-century visions of Doc Savage was actor Steve Holland, who, among other roles, played Flash Gordon on television. With Bama's image in mind, bolstered by Dent's rousing text, it's easy to see why Ely fell a bit short. On the other hand, Doc Savage did quite well on radio (theater of the mind) and in comics. 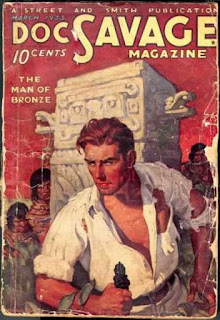 Of all the many pulp heroes birthed in the turbulent social and economic era of the Great Depression, only The Shadow can claim to have experienced the same sort of enduring fame as Doc Savage. It was the success of the Bantam editions of the Savage stories that caused Pyramid Books to reissue adventures of The Shadow under the pen name of Maxwell Grant (aka Walter Gibson). Though Pyramid's books did not have the same success as Bantam's, they did better than other attempts to resurrect Depression-era heroes: others made the mistake of trying to "modernize" the heroes, a fatal error. Recently, though, another hero, The Spider, is making a comeback in oversize omnibus volumes, and, wisely, the flavor of the era, warts and all, is being retained.

While catching up with the volumes already published by Bantam, I also started purchasing the books as they came out, or tried to...sometimes I missed them, but more often I just could not afford them. Unfortunately, when the government sets minimum wage at less than a dollar an hour employers have no incentive to pay more. I guess I could have told my employers I needed more so I could buy Doc Savage books, but I really don't think the compassion (or the raise) would have been forthcoming. As people grow up, priorities have to be set, and my life was no different. Much later, I lucked out when I lost my job as an editor of nuclear submarine tech manuals at a naval architecture firm...the luck came not in being fired (they say "laid off" but we all know what it really means) but in having a guilt-ridden managing editor; included in the boxes of books he gave me was a mostly complete run of the Bantam Doc Savage.

Guilt is a wonderful thing! Anybody with a mother already knows that, but it's nice not to be on the receiving end for once. Between what I already had and what I was given, I had it all.  "On top of the world, Ma, on top of the world!" Now, years later, I also have new novels by writers other than Lester Dent, comic books (b&w and color editions), radio programs, magazines, the film, new audio productions, fan publications, and lots more. I also have something you don't usually get for a fictional character, a biography, this being Doc Savage: His Apocalyptic Life. The book is by science fiction writer Phillip Jose Farmer, and in addition to telling the stories of Doc Savage and his men, he also links Doc Savage to other literary lives, such as Sherlock Holmes, James Bond and Wolf Larson. It is a great read in itself, even without reading a single novel. 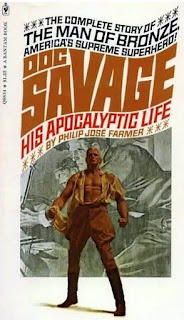 Though the Bantam books are now out of print, they are not at all hard to find, and they are definitely worth collecting because of the Bama covers. New editions of Doc Savage's pulp-era adventures are currently being published by Nostalgia Ventures, two novels in a single oversized volume. Not only do you get the full text of the stories, but also articles about Lester Dent, Doc Savage, pulp magazine publishing and the times which gave birth to such a larger-than-life hero. In many ways, Doc Savage is more popular now than ever. 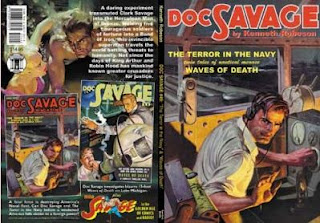 Maybe Doc Savage still inhabits the imagination because we still need him. Government fails us at every turn, not just because our leaders have feet of clay and serve "principalities and wickedness in high places," (Ephesians 6:12) but because governments are best at failing...it's what they do, and do well. And real-life heroes reach an apex for only a moment -- after rescuing someone from a fire there is the day after, and the day after that, the tedium of life that does not tolerate heroics; or the hero is corrupted by money or fame. We need heroes to be heroes day after day, and incorruptible. I think that is why Doc Savage remains popular enough for writers and editors to devote lives and fortunes to ensure the fantastic adventures remain in the public eye; and it's why people still plunk down their hard-earned dough (by the way, minimum wage still sucks, and government should stop holding people back) to obtain the books, magazines, artwork, recordings and fan publications. Have no fear, Doc Savage is here! 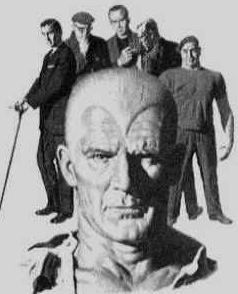 The Code of Doc Savage
Let me strive every moment of my life to make myself better and better, to the best of my ability, that all may profit by it. Let me think of the right and lend all my assistance to those who need it, with no regard for anything but justice. Let me take what comes with a smile, without loss of courage. Let me be considerate of my country, of my fellow citizens and my associates in everything I say and do. Let me do right to all, and wrong no man.
Posted by Ralph E. Vaughan at 17:43