In Remembrance of the Robots' God 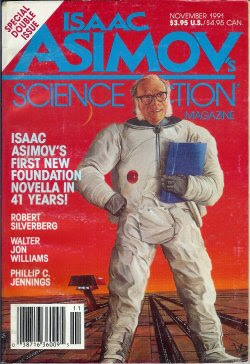 Even now, it's difficult to write those words, to consider a world without Isaac Asimov's wit and wisdom, his soaring imagination, his galactic vision, his confidence in a future that had the possibility of being much better than the past. I never met Asimov, never spoke with him, never corresponded with him, and yet I felt closer to him than many people I have known my whole life. I think this is as much a testament to the vigor of his writing as to the effect of the written word itself on a reader's life. 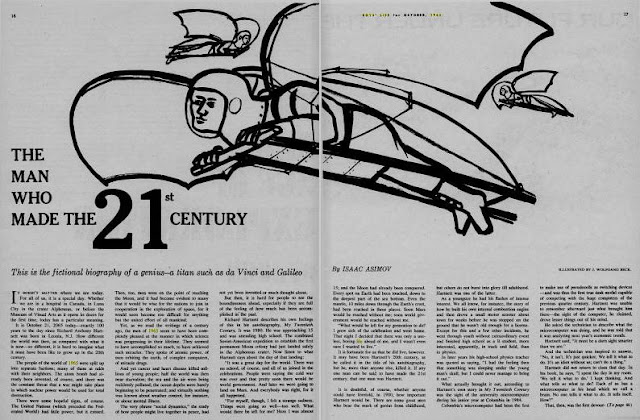 Looking back, I can't recall exactly when I encountered Isaac Asimov's writing. Certainly it was prior to the appearance of  his story The Man Who Made the 21st Century in the October 1965 issue of Boy's Life, the Scouting magazine, for I recall being very excited about the story. Even now, I remember vividly the story of the Renaissance Man (though I would not have used the term at the time) whose inventions created the kind of future in which we needed to believe in 1965. It was the sort of future in which I needed to, and did, believe -- the real future has been most disappointing. But at that point, I still had hope. And in that era, when the Boy Scouts was still a force for good and not a political football for cynical activism, it seemed quite possible that American exceptionalism (which was not a dirty word then) could give rise to another Thomas Edison or Nikola Tesla. I could not see then, as I do now, that Asimov modeled his protean genius on himself, but if I had I still would have believed in the future. 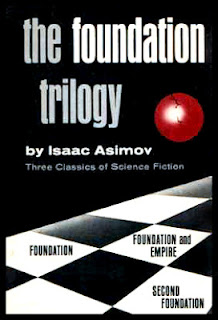 Early on, I joined the Science Fiction Book Club, the venerable mail order service that in 1953 began supplying hardcover science fiction books to geeks and nuclear scientists nationwide, and the first book I bought (for the introductory offer you glued a dime to the advertisement and mailed it to them) was the one-volume edition of Isaac Asimov's Foundation Trilogy, which was comprised of Foundation, Foundation and Empire and Second Foundation. Though the short stories, which originally appeared in Astounding Science Fiction, were first published in hardcover in 1951 by Gnome Press, many millions of people initially encountered Hari Seldon and psychohistory in the SFBC's omnibus edition. Since that time, of course, the series has progressed beyond the trilogy with Foundation's Edge and Foundation and Earth, and regressed through the prequels Prelude to Foundation and Forward the Foundation; actually, Asimov eventually tied all his major fiction to the foundation theme, creating a grand unified literary universe. 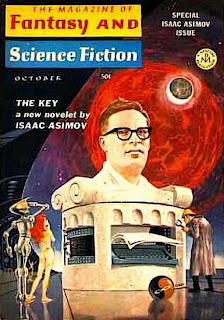 It was through The Magazine of Fantasy and Science Fiction (F&SF) that I encountered Isaac Asimov on a monthly basis, for he started writing a regular science essay in 1958, and F&SF was one of the first, if not the very first, magazine I asked my mother to buy me instead of a comic when we went to the Thrifty Drug Store...she balked a bit, because the comics were only a dime while the digest magazine was 40 cents, but she gave in...when you're smiling, and quiet, and polite, and looking at her with those liquid hazel eyes, what can a mother do but forget about the spilled milk and argument with your brother (it really was his fault) and give in and buy the magazine? I learned more about science from those monthly installments of wisdom than from all the classes I ever took, and they were certainly more inspirational. In fact, Asimov was usually so cutting edge on his information that I regularly found myself in disagreement with my science teachers...they never won the arguments, of course, and I think it annoyed them even more because they could never give me less than an "A." Thanks, Dr Asimov. 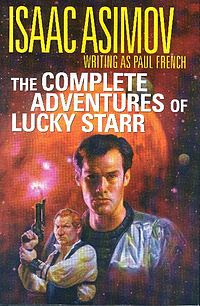 Probably another early encounter with Isaac Asimov occurred when I stumbled onto the David (Lucky) Starr series of books, though at first I did not realize I was reading something from the typewriter of Isaac Asimov since they were published under the name Paul French. The reason for the pen name was because the books were aimed at a younger audience, the sort of youths who watched Space Patrol after school, and Asimov wanted to keep the books separate from his other writings. Well, you know how it is with pen names -- first they hide the author, then they herald the author decades later. When David Starr, Space Ranger appeared in 1952 it was A SCIENCE FICTION ADVENTURE BY PAUL FRENCH; by 2001, when the SFBC brought out an omnibus volume with all five novels it was ISAAC ASIMOV WRITING AS PAUL FRENCH. Of the five novels, my favorite is Lucky Starr and the Oceans of Venus, perhaps because it depicts how Venus should be. In 1966, I recall arguing for an oceanic Venus...before the Russians ruined everything by landing a probe, which was crushed, then melted. Darn Ruskies! Personally, I think Asimov had it right, but someone forgot to tell the solar system.

The Bible, Shakespeare, the mysteries of Heaven and Earth -- I knew long before the rest of the world that Isaac Asimov knew more than anyone else, but even I did not know that he knew everything. I suspected he did, but I did not know. The range of books published under his name was truly astounding, and though other writers may match quantity (about 500 books) I don't think we will ever see again a writer with the ability to communicate to the ordinary reader such a dizzying range of subjects. Unlike other writers who get shoved into a profitable niche, it was possible for a person to read a large number of his books and never know anything about robots, galactic empires, mysteries, science, dirty old men, literature or history...he wrote more than enough in every field to be considered an expert in any field. 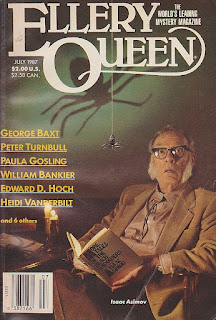 Isaac Asimov perfected the science fiction mystery, melding two genres supposedly unmixable in a series of stories beginning in 1954, collected in Asimov's Mysteries (1968), and in two novels. He was, however, quite a force in the mystery genre itself, publishing two collections about the boy detective Larry, a collection about the problem solver Griswold, and a half-dozen collections about the Black Widowers, members of a private men's club who tried to solve problems, and watched in awe as their waiter Henry actually did. Being primarily a science fiction guy then, I was wary of Asimov's foray into what I considered alien territory (I should have known better, being a fan of Frederic Brown and Anthony Boucher, both of whom are jealously claimed by both genres), but as I read the stories appearing (mostly) in issues of EQMM, I was won over. Asimov also wrote an academic murder mystery (The Death Dealers), and an hilarious mystery, Murder at the ABA, in which fictional author/detective Darius Just is involved in a murder mystery and harried by writer Isaac Asimov, there gathering information on a murder mystery he is writing -- meta-fiction at its best. 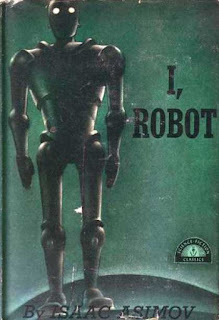 If there is one subject with which the name Isaac Asimov is synonymous, it is the robot. His robots began marching though the world of SF in 1940, and along the way gathered a positronic brain, the three laws that govern their metallic lives, and eventually something of a soul. The three laws of robotics have become so ingrained in our culture that even non-SF fans will quote them in the now-real world of robotics: 1) a robot must not injure a human or allow one to come to harm, 2) a robot must obey orders except when it will harm a human being, and 3) a robot must protect its own existence except where it conflicts with the first and second laws. The laws are so basic they have not changed at all since being presented in the 1942 story Runaround. How many laws written by our own politicians match their simplicity and immutability? No wonder the robots worship Asimov. 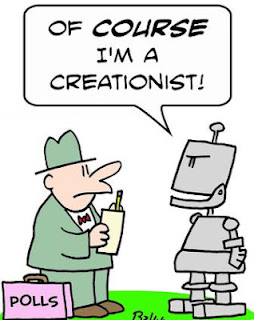 One of the reasons I felt I knew Asimov better than I did other writers (you have to remember the times...no computers, no cable, no Internet, no Wikipedia) is that his short story collections did not just present story after story without commentary. No, his stories were often accompanied by forewords and/or afterwords about the origin of the stories, his memories or insights into writing, sometimes verging on being intensely autobiographical in revealing ways. It was on these insights that I heavily relied when I wrote a biography of Asimov for an 11th grade English teacher who claimed she'd never heard of him -- I always suspected some level of mendacity, for she was otherwise an intelligent person; besides, after reading my paper (written in neat teeny-tiny penmanship on long legal paper) she knew more about Asimov than she probably ever wanted to know. You're quite welcome, Mrs. Welles. 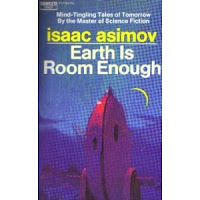 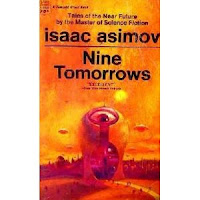 One event made 1977 a memorable year, and, no, it was not the start of Apple Computer, the debut of Star Wars or the first performance of The Clash; not even the discovery of rings around Uranus (who knew?). No, it was the appearance of the first issue of Isaac Asimov's Science Fiction Magazine. 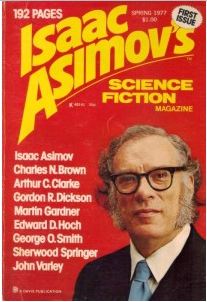 I was stationed in Germany at the time, but the Stars & Stripes Bookstore was almost like a second home to me. In those pre-computer days (well, I played Pong! once) it was my way of staying current with the science fiction scene, that and the SFBC. The bookstore provided books and periodicals only slightly delayed after American publication. The magazine was brought to us by the same company that published Alfred Hitchcock's Mystery Magazine, but whereas Hitch lent only the brand of his name for a price, Asimov brought his talent and energy as Editorial Director; though he worked with four editors from 1977 - 1992, the magazine always remained his, and, in a very real way, it still does.

When I was first told of Asimov's death by a friend who knew of my interest and affection, I did not believe him. He might as well have told me the sun decided not to rise that day...but when I learned the truth of his claim the day seemed as day as if the sun truly had not risen. The world seemed a much more dismal place, and any hope for the future gave way to an expectation of a spreading dystopia (which has come to pass). That day, on my way home from work, I had to stop for gas at the station on El Cajon Blvd and I-805, and when I went to the attendant's office to pay I noticed he was reading The Robots of Dawn, Asimov's sequel to the science fiction mysteries The Caves of Steel and The Naked Sun, and I told him Isaac Asimov was dead. It was a cruel thing to do, and I immediately regretted the brutality, but at that moment I needed someone, even a stranger, to share my misery. 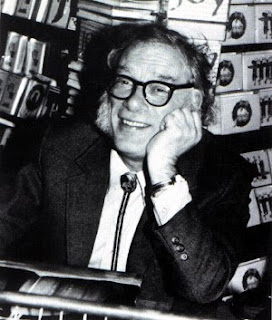 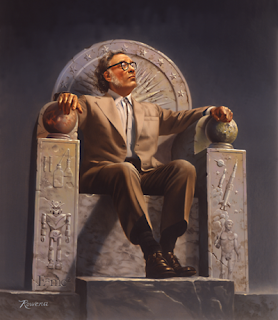 Humanity has the stars in its future, and that future is too important to be lost under the burden of juvenile folly and ignorant superstition.          -- Isaac Asimov 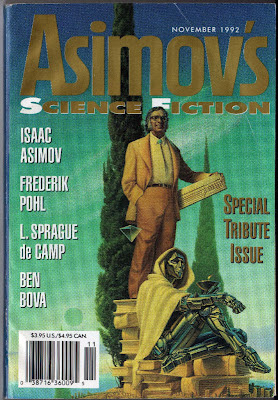