Are You a Fictional Character?

In the Star Trek: The Next Generation episode Ship in a Bottle, Professor Moriarty, of Sherlock Holmes infamy, seems to have escaped the confines of the holodeck and taken over the Enterprise. Of course, he has really done no such thing. Having achieved consciousness during a prior episode, Moriarty merely takes control of the holodeck computer and traps Captain Picard, Lieutenant Commander Data and Lieutenant Barclay in a holographic version of the Enterprise. In effect, they become real people (from their point of view) caught in a fictional universe by a literary character. 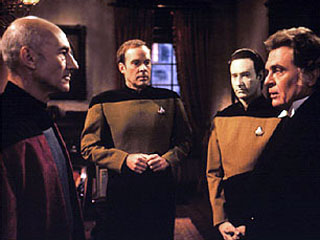 Taking a page from Moriarty's own book, the three officers use the transporter on the holodeck Enterprise to beam him and his paramour to yet another holographic version of the Enterprise, on the holograph's holodeck, which he mistakes for the real Enterprise; from there, he sets out into the universe in a shuttlecraft. When the Star Fleet officers shut down the simulation, they find themselves on a simulated holodeck, which they shut down to find themselves on a holographic holodeck, which they shut down to find themselves on the real holodeck, which Commander Riker has been trying to enter for hours. What of Moriarty? He now exists in a compact simulator that Lieutenant Barclay will keep "in a safe place." As far as Moriarty knows, he journeys through a real universe. As Captain Picard puts it: "Professor Moriarty has his reality, and we have ours.  But who knows? Our reality may be very much like his, and all this might just be an elaborate simulation, running inside a little device sitting on someone's table." Later, when Barclay is alone, he looks about nervously and utters: "End program." He is relieved by the non-result.

It can be quite disconcerting to be reading a book and encounter characters who realize they are characters in a book. I came across such people when I read Wilson's Illuminatus! trilogy. Because the author decided to paraphrase and skip a period during a detailed discussion between some of the characters, they  realized they were figments of a literary imagination and raised a ruckus about the writer's lack of style, poor plotting skills, and...well, they called him a hack writer. I know from experience that writers do not get nearly the respect they deserve, but, really, you expect better treatment from your own creations.

In Robert Heinlein's The Number of the Beast, we have a foursome of what appear to be pulp fiction characters who use a machine created by the Mad Scientist of the group to move to various versions of reality, or what they first accept as alternate universes -- in time, they realize what they are journeying to are actually different literary universes, and that the Black Hats who have been menacing them at every turn are really just avatars of the author; they understand that their adventures are being created by an omnipotent (though not very competent) writer at some sort of cosmic typewriter, but savvy readers know even more -- the name of every villain or antagonist is really an anagram of a Heinlein pen-name, and he had a lot of them. This is a book I've read a half-dozen times, and disliked it each time. And yet I keep going back. And I own two copies! Go figure!

In the Thursday Next series by Jasper Fforde, literature plays a central role. In fact, literature is the heart of creation. So intertwined is the world of Thursday Next, a book detective working for England's Special Operations Network, with literature that people can jump into their favorite books, and the characters of the books within Thursday's book can jump out as well. Just as the characters who enter the realms of fiction are aware they are in books, so those who escape the books are aware of their literary status. I've often found myself getting lost in a good (or not so good) book, but in the literary universe of Thursday Next getting lost in a book is taken to a whole new level. Those who enter books run the risk of changing literature, a very serious crime. I've not read all the books in the series yet, but the ones I have are very entertaining. Don't be surprised to find yourself yearning to drop in. 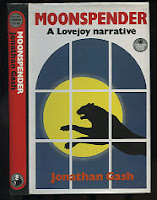 Jonathan Gash's Lovejoy series also uses a character who's aware he is in a book, but he thinks he's just as real as we are. Lovejoy is a divvy, a man who can sense an antique's true value, or the worthlessness of a copy, and while he's not a detective in the purest sense, he does often find himself involved with murder, larceny and perfidy. What's really disconcerting about Lovejoy is his tendency to suddenly break away from action and conversation, ignoring his fellow characters, to directly address the reader, a technique carried over when Lovejoy was adapted for television. To quote Travis Bickle: "You talkin' to me?"

Clive Cussler is not the first author to insert himself as a character into a book -- it's as old as Cervantes in Don Quixote and such modern authors as Isaac Asimov and Stephen King have done the same thing -- but no one has, I think, done it as often or as obviously as Clive Cussler in his Dirk Pitt series of books. If writing yourself into your own book was a crime (and some critics think it should be) then Cussler would be a lifer in Sing Sing. I first noticed it in Sahara -- Dirk and his companion are saved by an old coot of a prospector wandering the dunes with his burro, and of course the old coot introduces himself ("I don't like my name 'cause it's kinda funny.") as Clive Cussler. Very disconcerting! And Cussler does it time and again  -- in the wilds of Antarctica he shows up on a hovercraft; Dirk needs a classic car and Cussler provides it. This reached a peak in Dirk Pitt Revealed, which contained a short story where Clive Cussler crashed a reunion party and got to hobnob with all the characters he created...even the dead ones. So, in whom should we invest our sense of reality -- Dirk Pitt, beloved of millions and world-saver, or Clive Cussler, a now-and-then minor character? Who is more fictional?

People who love books (and if you're not one, you've probably wandered into the wrong blog) often find themselves thinking of a literary universe as real. Millions of people worldwide, for example, have imbued Sherlock Holmes with a level of reality that would have horrified Conan Doyle. And it's possible to go on walking tours of James Bond's London and Phillip Marlowe's Los Angeles. While it's one thing to give reality to a literary creation, it's quite another thing for that literary creation to take it. I mean, if it's possible for a fictional character to be real, does that not open the possibility of real people (us) being fictional? Does the true nature of world events (and the smaller events of our lives) have less to do politics and personal conflict, and more with bad writing? Is that thunder we hear, or the keys of a cosmic typewriter? Could our reality be nothing more than an elaborate simulation, running inside a little device sitting on  Captain Picard's desk?

Maybe not. But are you brave (or foolhardy) enough to shout, "End program!" Before you share the sense of relief felt by Lieutenant Barclay when his Star Trek universe continued existing at warp speed without interruption, you might consider the idea that, like him, you are just a minor character. 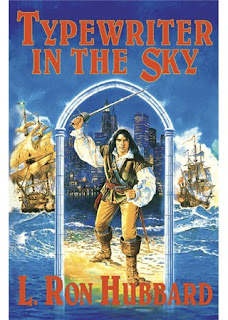 I would be quite remiss if I did not include one of the best stories in the I-am-a-fictional-character genre, Typewriter in the Sky by the late Scientology guru L. Ron Hubbard. It must have been somewhere in the back of my mind, for I earlier mentioned the thunderous sounds of a cosmic typewriter, but it leaped to the forefront of my consciousness today when I came across my 1995 re-issue by Bridge Publications. The story appeared across two issues of Unknown Fantasy in 1940, then was published in 1951 (along with another Hubbard novel Fear) by Gnome Press. The story concerns Mike de Wolf, a musician, who is visiting the walk-down Greenwich apartment of his friend Horace Hackett, a writer of pulp potboiler adventure tales. After getting an electrical shock while in Hackett's bathroom, de Wolf wakes up on a Caribbean beach in 1640; he has not traveled back in time, but has become a character (a villain named Lobo) in Hackett's latest pirate yarn Blood & Loot. Since villains do not fare well in his friend's tales, he has to figure out how to get back to the real world, surviving the perils tossed at him by the crashing keys of his friend's typewriter, the last sound he heard before being electrocuted. It's a rousing tale by Hubbard written when he was at the height of his popularity.
Posted by Ralph E. Vaughan at 10:25