I first encountered Miss Maud Silver, retired governess turned private detective, at a book sale. I freely admit I had never before come across this literary sleuth, and as I read the back cover, the thought passed through my mind that she must have been patterned along the lines of Agatha Christie's Miss Marple or even Heron Carvic's comic parody Miss Seeton. But then I looked at the copyright date of Grey Mask (1928) and realized Miss Silver predated both -- Miss Marple's Murder at the Vicarage was published in 1930 and the parodical Miss Seeton did not appear on the literary scene until 1968. 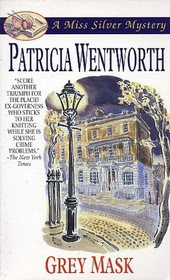 The story of Grey Mask is melodramatic, very cozily English, and chocked with characters to the manor born, inheritances, star-crossed lovers, family secrets, scoundrels, stiff upper lips, mysterious masked masterminds, and, of course, Miss Maud Silver to straighten it all out, a motif for all the books that follow.

Miss Silver was the creation of Patricia Wentworth, born Dora Amy Elles, in Mussoorie, Uttarakhand, India in 1878, daughter of a British Army officer. After writing several competent but unremarkable romances, Miss Wentworth turned her hand to mysteries, just as other women (Josephine Tey, Agatha Christie and Ngaio Marsh, etc.) were doing in the Golden Age of Mysteries. Altogether, she wrote 75 novels (starting with A Marriage Under the Terror [1910], a romance set in the French Revolution), 32 of which involved Miss Silver, former governess living at 16 Montague Mansions, West Leaham Road, SW, London, who expected no better fate than a penurious existence dependent upon a tiny pension and a niece's charity...until she discovered her talent for hunting murderers. 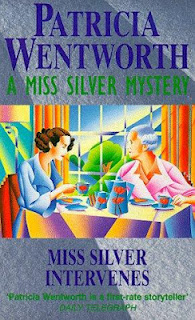 There's something appealing, I suppose, about octogenarian women solving murder cases, plunging into dangerous situations all in a quest to bring order out of chaos and preserve society's morals. How else to explain the virtual army of old women with knitting in one hand, a magnifying glass in the other? Could it be a modern avatar of the Jungian archetype of the tribal wise woman? All I know is that the easiest way to create a sympathetic and popular character is to make her an old busybody who finds herself in the most perilous profession possible -- Miss Marple, Miss Seeton, Miss Silver, Jessica Fletcher, Agatha Raisin, the Snoop Sisters, Hidegard Withers, and even Gracie Allen (guesting in a Philo Vance novel).

Unlike Miss Marple and many of the others, Miss Silver is an actual private detective, or private enquiry agent as they are sometimes termed in England. She is paid for her work, but, of course, her real reward are the lives saved and the couples united, all memorialized in her modest flat by dozens of framed photos.

Clients who come her way, steered toward her either by others she has helped or by Scotland Yard Inspectors Lamb and Abbott (who were, separately, two of her charges when she was an active governess), or by the Hand of Fate, often think they have made a mistake...

However she had done her hair, it would have appeared, as she herself appeared, to be out of date. She was very neatly dressed in an unbecoming shade of drab. Her indeterminate features gave no indication of talent or character. Her smooth sallow skin was innocent of powder. She was knitting a small white woolly sock, and at the moment of Henry's entrance she was engaged in counting stitches. After a minute she looked up, inclined her head, and said in a quiet toneless voice,
"Pray be seated."   --The Case is Closed (1937)

Miss Silver knits all the time, usually for one or more of her niece's endless supply of children, but she has few other habits. She may not have the eccentricities of Sherlock Holmes, and certainly not the addiction to the 7% Solution, but he would definitely recognize and approve her methods. Whereas Miss Marple is continually extrapolating the vices and virtues of the inhabitants of St Mary Meade into the larger world, detecting by analogy, Miss Silver employs keen observation and unemotional deduction. 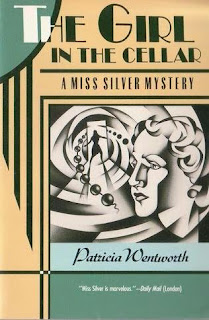 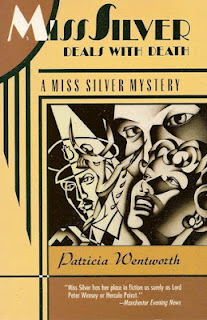 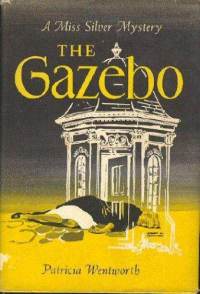 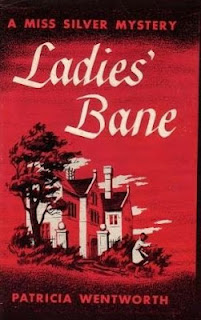 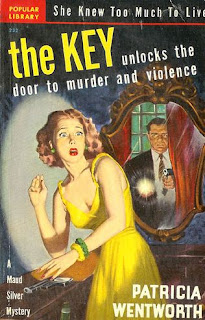 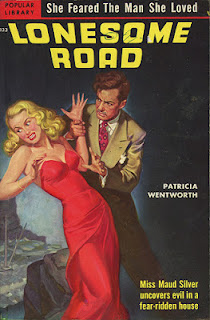 Aside for my predilection for the Victorian and Edwardian Eras, which I've mentioned elsewhere, I think one of the reasons I so much enjoy the Miss Silver series of novels is because justice is always served, and served well. Also, she is forceful and strong without being a bully, well spoken and refined without being snooty, and embodies all that is good and fair in the British Classic Mystery, an excellent representative of the the Empire. It also helps that she is always quoting Tennyson, one of my favorite poets. And like all the best detectives, she is a fixed point in time, as constant as the North Star, changeless in a tumultuous world, and ageless -- she is always the same person, from her first appearance in Grey Mask to her last bow in 1961's The Girl in the Cellar. Hopefully, this little taste has whetted your appetite for...

"...everyone's favorite spinster detective. In her black cloth coat and with her ever-present capacious knitting bag, she appears every bit the proper Victorian governess, which indeed she once was. Now she has taken on the much more lucrative occupation of private enquiry agent. Armed with the tenacious commonsense of the British and an uncanny ability to see into the very souls of murder suspects, Miss Silver is as memorable as the finest creations of Agatha Christie." (Cover blurb from the Bantam paperback editions)

If so, you might want to track down copies of Miss Silver's cases, which are quite easy to find. And unless you are into first editions (well, what book lover isn't, really?) the prices for the later editions are not too bad. To help you in your quest for completeness, I've adapted the listing from the Fantastic Fiction website, marking (*) my favorites, and including the alternate titles.