I have a fondness for Art Deco design, the angular streamlining so familiar to fans of the Poirot British television series set between the Great War and the Not-so-Great War, but I have a weakness for Art Nouveau, the flowing and naturalistic art movement which flourished from the early 1880s to the end of the Edwardian Age, just about the same time period in which consulting detective Sherlock Holmes was most active. In fact,  readers of The Strand and Colliers, the magazines which published Dr. Watson's accounts (sentimentally florid though they sometimes were) were surrounded by an Art Nouveau world, from advertisements to illustrations to travel posters. And, of course, book covers.

It was my weakness for Art Nouveau that first drew me to writings of Henry van Dyke (1852-1933), specifically a copy of Companionable Books (1922) at a book sale. I have known many companionable books; there was once an intellectual game played by book lovers (in these dark days of the evil Kindle I don't know if it is still played) but we would ask each other, "If you could only have three books with you on a deserted isle, what would they be?" Of course, your answer changes from time to time, more often if you are an active reader, but the subjects of your answers will always be "companionable books:"

"By companionable books I mean those that are worth taking with you on a journey, where the weight of the luggage counts, or keeping beside your bed, near the night-lamp; books that will bear reading often, and the more slowly you read them the better you enjoy them." -- Henry van Dyke

I have to admit that every time I played the game I cheated: my answers were always this omnibus or that anthology, or the complete one-volume works of this, that or another author. 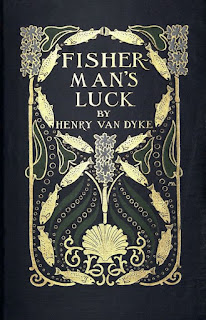 All the books by van Dyke that I found that day were designed by Margaret Armstrong (1867-1944), a great artist when bookbinding was more than just a convenient way to keep the pages from spilling into your lap. The binding of this copy of Fisherman's Luck (right) is a perfect example of Art Nouveau -- symmetry, swirls, natural motifs, and cleanly curved typography. Every graphic element, from the fish arranged in the symbol for "infinity" to the air bubbles, leaves and shell, reinforce the aquatic theme invoked by the title. In this book, van Dyke collects a few of his musings upon one his favorite topics -- angling. I have to admit I am not a fan of fishing (during all the times I have been dragged to the water, I have only hooked three things -- a starfish, a manta ray and a snake. But I do like to read about fishing, as long it stays in the philosophical arena and does not stray into areas too technical. As an author, poet and educator (van Dyke graduated  Princeton 1873, and was an English professor there 1899-1923), and as a preacher (he graduated Princeton Theological Seminary in 1877), he was very much grounded in nature, but unlike most who revel only in nature as an abstraction, he loved to tramp about in it. 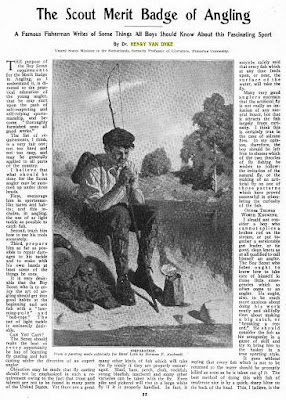 Van Dyke was also a frequent contributor to Boy's Life, the official magazine of the Boy Scouts of America, which I also read regularly when I was a boy. It was not, I think, that van Dyke was heavily involved with Scouting as much as the philosophy of Scouting (or its philosophy before the world went horribly awry) was embodied in his life and writings. Here (left) in an issue from 1914, he writes not as a preacher, a poet, a famous author or even as President Wilson's envoy to the Netherlands, but as a fisherman sharing "some things that all boys should know about this fascinating sport" in pursuit of the angling merit badge. Van Dyke's short stories were often chosen for inclusion in collections of "camp fire stories" regularly published by the BSA. For van Dyke, fishing was not only a way to commune with nature, but to bring people together. He tells in Fisherman's Luck of observing an ex-President and a medical doctor in a skiff off Sabbath-Day Point, but no longer learned men, just boon companions, silently fishing. But he was no advocate of silence: "Fishermen must be silent? On the contrary, it is far more likely that good talk may promote good fishing." 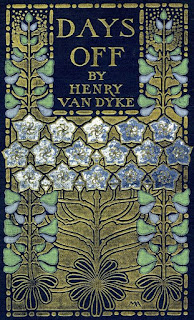 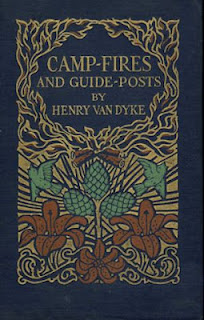 In Days Off and Other Diversions and Camp-Fires and Guide-Posts, van Dyke collects some of his best writings about the philosophy of nature and camaraderie. He avers that, "The camp-fire is the conservative symbol. It invites to rest and fellowship and friendly council, not unmixed with that good cheer which is suggested when we call a conference of wits a 'symposium.' There is no denying that man's best discourse has always been at a common meal, whether spread on the green grass or on a mahogany table." Obviously, van Dyke is from a more civilized time in American history, when civility was something worth striving for; not that there was not discord and civil brutality in popular culture and the public arena, but it was a time when we were still defined by polite society, before America began celebrating coarseness and vulgarity, before we began feting and praising doxies, thugs and bullies. In these two books, it's easy to get a bit lost in a world where nature is not very far away, and where there is no problem than cannot be solved by speaking honestly to one other over the warmth of a camp-fire, among whispering pines, beneath starry skies.

All designs by Margaret Armstrong

Henry van Dyke's books are not hard to find if you decide to add some companionable books to your library, and even the Margaret Armstrong-designed editions are available at no great expense. In addition to his books of essays, poems and stories, he also wrote two of the most popular Christmas stories, The Other Wise Man (1896) and The First Christmas Tree (1897). Now, if all you want to do is give van Dyke a try, without expending any money, only a little time, that's possible too -- although I am loath to steer anyone toward the beguiling evils of e-bookery, I will this time give a link to The Van Dyke Book: Selections from the Writings of Henry van Dyke, published by Scribner's in 1914, and which includes a biographical sketch of the author from the viewpoint of a child -- Brooke van Dyke.

Because of his devotion to peace and goodwill, van Dyke was absolutely opposed to America following any of the imperialistic paths then being blazed by the European powers; and back in his day America had yet to face any of the situations that would set it on the road that would inevitably lead to, if not empire, then world dominance. The pivot point was not WW1, as some people think, but the Spanish American War, and the then-inevitable Philippine-American War. Van Dyke was an ardent foe of Philippine annexation and in 1898, during one of his Sunday sermons, said something that has since become prophetic:


"If we enter on the course of foreign conquest, the day is not far distant when we must spend in annual preparation for wars more than the $180,000,000 that we now spend on education." 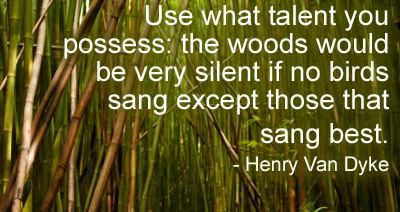