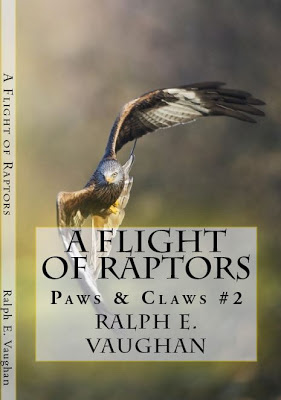 As regular readers (and a few who happened to stumble  in via various portals) know, I participated in the National Novel Writing Month event last year, the challenge being to write a novel of at least 50,000 words in just 30 days. My effort resulted in Paws & Claws: A Three Dog Mystery, in which my three dogs (Levi, Sunny & Yoda) fought the insidious Feral Gang as the Three Dog Detective Agency. After I published the book, I was surprised in two ways -- that it was quite popular, and that Kindle does seem to be replacing paper as the choice of readers...I was as delighted by the first revelation as I was dismayed by the second, but, I suppose that's just the way the civilization crumbles, so there you are.

I had more fun writing that book than anything else I have ever written, and even the imposed deadline did not lessen the joy of writing. It was great to once again be with Levi and Sunny after all these years. Almost as soon as I finished Paws & Claws: A Three Dog Mystery I wanted to write a sequel, which is quite unlike me. When Gary Lovisi asked me to write a sequel to The Adventure of the Ancient Gods for Gryphon Books, I'm sure it felt to him like he was pulling teeth, and impacted wisdom teeth at that. With this new book, however, I knew immediately I did not want to just write a sequel, but an entire series, an ambitious goal which caused me to quickly jot down the titles and plots for a dozen books. Still, before there can be a series, there must be a sequel, and now there is one...A Flight of Raptors.

In this new book, the Three Dog Detective Agency returns to make their neighborhood a better place to live, to investigate crimes and to protect the weak. And, of course, to fight evil. This time, evil comes to them in two forms:
All the characters who proved so popular in the first novel have returned, and many new characters are introduced, including Ajax the Mastiff ("Hard to believe he's descended from Roman war dogs," comments Levi), Christobal the Parrot leader who was smuggled here in 1916, Pallas the mysterious Raven, and Vortex, a Hawk who learns the unexpected dangers of tangling (not to mention entangling) with a wild-haired Pomeranian.

A Flight of Raptors may be ordered through your local bookstore and is also available through most on-line booksellers, including...