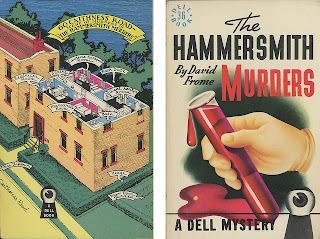 Before mystery writer Leslie Ford (Zenith Jones Brown [1898 - 1983]) fell from grace for writing a mystery series featuring a wealthy Washington socialite widow, she wrote several books under the pen-name David Frome while living in England, the most endearing of these featuring timid and elderly widower Evan Pinkerton. Dominated for years by a shrewish and parsimonious wife, enslaved as a menial in her boarding house, Mr Pinkerton felt the only relief from his terrible life was his friendship with a Scotland Yard copper named J. Humphrey Bull, who eventually rose in the ranks to Chief Inspector, and stayed his friend even after he moved out.

No doubt Mr Pinkerton, a Welshman who would have become a school master had his wife not told him to marry her, would have remained a penniless drudge under her thumb till the day of his death had his wife not had the good fortune (his, not hers) to die intestate. Although it was her intention to leave her money to anyone but her worthless and rabbity husband, she was too much of a skinflint to pay the tuppence it would have taken to buy and file the will form. So, Mr Pinkerton not only finds himself master of a house that no longer needs to take in borders, but he discovered his wife had much more money than anyone ever thought possible, saved from a lifetime of holding tight to every bloody half-penny, skimping on the gas, and cheating boarders and tradesmen whenever she could. Although 75,000 British pounds may not seem excessive, the buying power at the time would have been in the vicinity of $1.5 million. Despite his sudden wealth, he cannot bring himself to buy new clothes, fearful his dead wife will rise wrathful from her grave, so his only indulgence is going to the cinema thrice weekly, and even that he does with a nervous little glance over his shoulder. 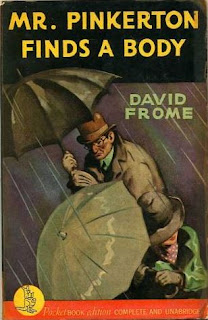 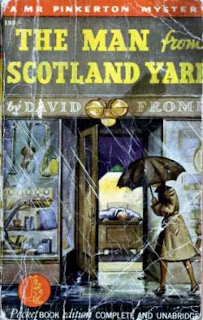 While Mr Pinkerton loves the cinema (he has some very odd notions about America from our gangster and western films) what makes his life worth living is the opportunity to help Inspector Bull in solving crimes, even if he has to dig up the body himself, so to speak, or stumble over it in the fog. Inspector Bull is generally grateful for the help rendered by his little friend, though his gratitude is sometimes after the fact, when he discovers he has been helped, and must save Mr Pinkerton from being murdered himself. When the Inspector knows he is being helped, he will set Mr Pinkerton to some safe, rather innocent task, such as watching a building he has suspicions about, but which is not actually involved in any case. Of course, with Mr Pinkerton's endless curiosity, his love of mysteries, his ability to know what Inspector Bull needs even when the Inspector doesn't, and the heart of a lion that lurks beneath his lamb's clothing, even the most innocuous task soon spirals into a matter of life and death...usually Mr Pinkerton's. 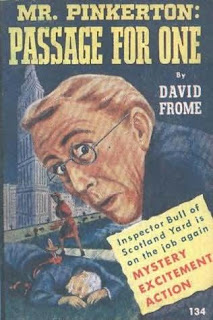 Very cleverly, Ford worked into the narratives of the books references to other cases that were never recorded, such as Watson did in the Sherlock Holmes cases. Rather than being cast-off bits, they work to make Mr Pinkerton seem even larger than life, such as when we have an image of a knife being wrestled from the hand of a madman in the Welsh mountains during a lightning storm before the future Mrs Bull can be done in; or they are infused with humor, such as when we are presented with a remembrance of Inspector Bull transporting Mr Pinkerton down the High Street at great velocity in a wheel-barrow in pursuit of a villain. The entire series is an even mix of humor and adventure, with nearly everything seen from Mr Pinkerton's unique and often skewed point of view. The books are, unfortunately, out of print, but still easily available, and well worth the effort tracking down for the fan of the sort of light-hearted British mysteries popular in the Golden Age.