Agent X and Operative 3 On The Job 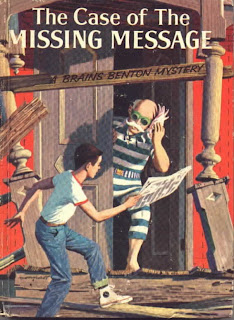 The library at J. Calvin Lauderbach Elementary School in Chula Vista did not have, at first glance, much going for it. Contained in a single room, with shelves around the walls and two free-standing shelves in the middle, it was not much bigger than the library at my former school, Highland Elementary in National City, which I considered tiny, shoved, as it was, into a storage room behind the auditorium. But being a bibliophile even at that age, I had to look around, see what I could carry home...after checking it out, of course. I found the usual science books and children's classics, history books and a few art books, but I found something in abundance that had been lacking at Highland. Either Lauderbach's librarian was a kid at heart, was a kid's best friend, or knew the best donor in the world -- I found complete sets of Tom Swift Jr, the Hardy Boys, Nancy Drew, Rick Brant, the Power Boys, Ellery Queen Jr...and Brains Benton.

Brains Benton? Who? Well, if you don't know who that is and you grew up in the middle of the last century, I just don't know how to explain it. Barclay "Brains" Benton (X) and Jimmy Carson (Operative 3) were the young teen owners of the Benton & Carson International Detective Agency, headquartered in the seemingly quiet Midwestern town of Crestwood. Lest you think the "International" was just a piece of grandiose flummery by the young sleuths, they did manage to save a foreign kingdom in The Case of the Roving Rolls. In other tales they solve a mysterious message ("The kangaroos have escaped"), stop a gang of rare coin counterfeiters, and recover $5,000 ($85,000 in today's devalued cash) stolen from the town. 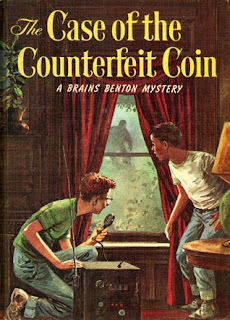 Although the series lasted only three years, the brainchild of Charles Spain Verral, the series was very influential, on me at least. It was with Brains and Jimmy in mind that I formed my first detective agency in 1961, and that was when I first discovered a dichotomy between fiction and real life...fiction is much more interesting. That also came to mind almost twenty years later when I did some work for attorneys and some private detectives after college...fiction was still better, and is why I now write mysteries rather than try to unravel real-life ones. The stories are a bit dated, but not as much as others, and there is still some interest in the series, enough to cause fans start writing new cases starting in 2008. If you want to collect them, they are still relatively easy to find and are not exorbitantly expensive. Also, if you limit yourself to the original books published by Golden Press it's not hard to collect the complete set.
A half-century has passed has passed since I first stepped onto the campus of Lauderbach Elementary and made my way to the library. The school has changed profoundly. Places where I played ball and tag have been covered by "temporary" classrooms for decades. English is spoken by a minority of kids. The school is completely surrounded by iron fences and locked gateways that would do a Super-Max proud. Classes no longer start with the Pledge of Allegiance. And, of course, the school library is about five times larger and well stocked with every book adults consider fit reading for children...what a shame.
Posted by Ralph E. Vaughan at 20:28