Learning to Read by the Colors 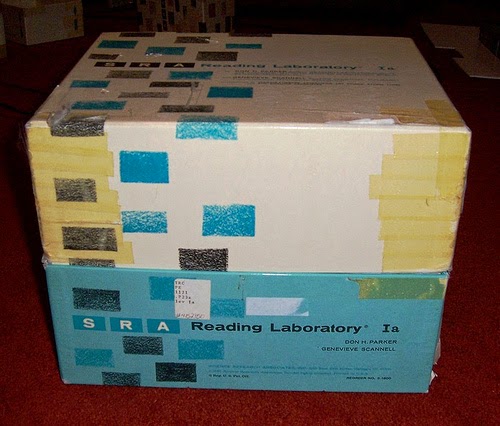 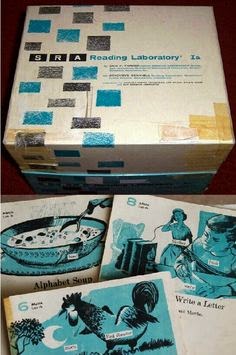 I attended Highland Elementary School in National City, Calif., through third grade before moving to Chula Vista and starting at Lauderbach Elementary. I've mentioned elsewhere that I was motivated to read mostly because Uncle Bob, well-intentioned though he was, was not very good at reading comic books aloud. Although those comics of the early Silver Age served as my primers, I also got a big reading boost in the classroom through the SRA Reading Lab, a series of color-coded "reading cards" which helped children improve vocabulary and comprehension as they were entertained with engaging stories or interesting articles. As I progressed from card to card within a particular color coding, I gathered more and more reading skills, and by the time I reached the last card in a color I was ready to start in on the next color, which required a larger vocabulary, higher levels of comprehension, and featured more complex subjects or plots. As I recall, most kids in my classes didn't like the SRA Lab exercises anymore than they liked anything else required in school. Personally, however, I enjoyed them so much I barely realized they were actual classwork, and might have worked straight through them to the exception of all else, had my teachers not exercised their dictatorial powers.

The SRA Program was the creation of Donald H Parker, who was a reading teacher in rural America and noticed that his students did not do well when taught from the same reading book all at the same time. Some lagged behind, becoming frustrated when they were pushed to keep up, while the better readers in class experienced frustration from being held back by underachievers and normal readers. In 1950, he invented a system of teaching reading skills on an individual basis while in a communal classroom environment. After receiving his PhD from Columbia University, he approached Chicago-based Science Research Laboratories and pitched them the idea for a program marketed to schools nationwide. If you want to read about his struggle to bring his idea to market a great article has been posted by SRA Reading Labs on its website.

I have to admit, when I was initially evaluated for SRA placement, I was pretty far down the ladder, not quite at the bottom, but uncomfortably (and embarrassingly) close. But tests are not always as revealing, or as accurate, as they are touted to gullible school administrators. To the amazement of all, except myself, I went through those early lessons like a blowtorch through butter. First, the teacher thought I was deluded, that I had convinced myself I was a good reader when I was not, then she was certain that I was somehow cheating, even if she did not know how. Silly teachers! It was not till third grade that I was assigned a teacher with a brain, a sensible lady named Mrs Decker, who not only let me proceed through the SRA Lab for my grade at my own speed (which was fast), but also encouraged me to write my own stories...so, anyone who has a beef with my writing can probably blame Mrs Decker. 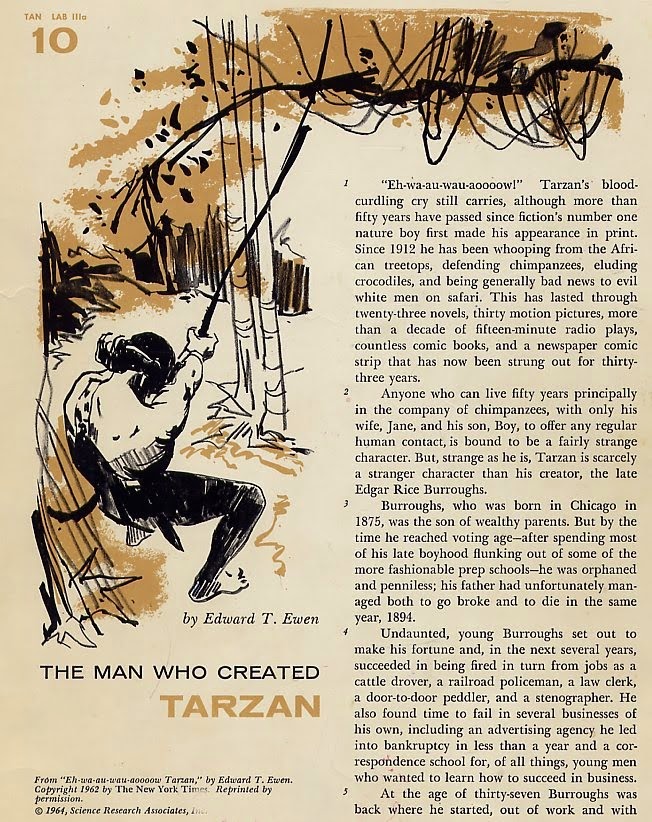 Unfortunately, third grade does not last forever, but I was looking forward to fourth grade for a number of reasons--I would be back in the main building rather than in the original two-room schoolhouse (alas, now demolished), I could look down on third graders (metaphorically, since I was the shortest kid in class), my marble-shooting skills had really improved (yes, I will win all your marbles), and I would be moving on to the upper level SRA Reading Lab (yes!). I had big plans for fourth grade, but the best-laid plans of mice and schoolchildren oft go astray.

In the summer of that year, my parents moved us ten miles south to Chula Vista, back in the days when a veteran could qualify for a home with $1 down and a mortgage payment a bit less than 25% of one person's income. I was wary of the move. Yes, I would be glad to have my own room, but what about the school? I didn't know what a "Lauderbach" was, but it didn't sound good. Of course, my parents told me everything would be all right, but parents always make baseless statements like that, don't they? A school was a school, they said, and I probably wouldn't even know the difference. "Sigh." On the first day of school, I learned the horrible truth--the school building was of a "modern" design, I didn't know who to look down on since they were all strangers, no one at the new school played marbles, and, worse of all, this school didn't use the SRA Program. When I walked into class, I looked around and asked the teacher (nameless here to protect the guilty) where the SRA Reading Lab was. She didn't know what I was talking about. Silly teacher!
Posted by Ralph E. Vaughan at 11:49