"Doctor, my son swallowed a set of encyclopedias!"

Most kids these days are not exposed to books the way they used to be. This fact was driven home some years ago when the Kidette was in elementary school, and the instructor was teaching the class the concept of estimating. She asked the moppets to estimate (not count) the number of books and magazines found in the home -- though estimating is best for large figures, she probably wanted to keep the numbers reasonable. Her answers ranged from zero to around fifty; the Kidette, however, first gave her an estimate of 20,000, then changed it to 30,000 when she considered her mother's contribution to hyper-literacy. It came up at the parent-teacher conference and while she had not wanted to embarrass the Kidette at the time she was quite curious as to what the real number might be. We told her 30,000 seemed a little low, but it was not a bad estimate for a third grader. Fifty?!? Give me a break...we have more dictionaries that that, not to mention encyclopedias.

Well, none of the kids did mention encyclopedias, and probably for good reason -- who has them anymore? Today's cyber-zombies may ramble through Wikipedia now and then, when not playing Angry Birds or World of Warcraft, but I really doubt many have spent any quality time with a real set of encyclopedias; one thing I do know -- not one would consider a volume from any encyclopedia set as recreational reading: as far as I'm concerned, just more proof that civilization is doomed. 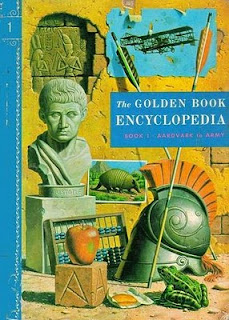 Whenever I would embarrass my mother by showing off in front of friends and family, which was quite often, she would frequently resort to the old excuse: "You'll have to forgive my son -- he swallowed a set of encyclopedias." She would sometimes add: "And he's a smart Alec."...though sometimes it wasn't "Alec." The latter was true enough, but the former statement was exaggeration and hyperbole. No one can possibly swallow a set of encyclopedias; a dictionary, yeah, but not encyclopedias. But I did have a set of encyclopedias, I read them like other people read short story anthologies, and I must admit some of the information was just so darn interesting that  it would have been almost criminal not to share it with friends and family...often...and loudly...when the adults were just prattling on about nothing in particular. Actually, when I think about it, it's really amazing my parents didn't move to another city after sending me to the store on an errand, though they did change the locks a couple of times.

The encyclopedia in question, my first set but certainly not my last, was The Golden Book Encyclopedia, published by Western Printing and Lithography Company. Back in those halcyon days of black & white television, before Bill Gates invented the computer and Al Gore the Internet (or Global Warming), the epitome of learning was an up-to-date encyclopedia, and the best for kids, with its clearly written articles and fantastic illustrations, was the Golden Book. I found out later that most kids (60+ million of us) got their sets at the supermarket, one or two volumes at a time. Mine, however, came complete out of the new freezer my parents bought, along with a globe of the Earth. I was not too sure where babies came from, but I surely knew where encyclopedias -- and globes -- came from. I did learn eventually the truth about the publishing industry from my Golden Books, but I had to wait for a less innocent time to learn about that baby thing. 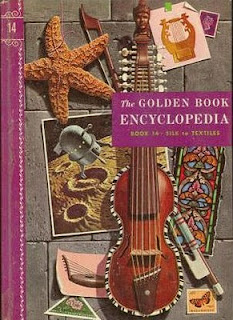 I learned a ton of stuff from the Golden Books, starting with the great covers, which depicted many of the volume's subjects in a photorealistic manner, and it was something of a game, flipping from article to cover and back. With the actual books, it was an easy matter to browse about as one article piqued my interest about subjects in other volumes. You might argue that "browsing" is an even easier task in Wikipedia with all its hyperlinks and clickable websites, but can you read Wikipedia under the covers with a flashlight? No, I thought not, but it was a good try (almost) on your part.

At one time, men with strong arms could make a good living selling encyclopedias door to door, but that was also when someone was home during the day, usually the Mom but not always. And in at least one case I know of, buying a set of encyclopedias could get you more than just an annoying show-off of a kid...in Spring Valley, just east of National City, there was a time when, if you did fall for the sales pitch, in addition to the set (alas, it was not Golden Book), you also got a plot of land upon which to build your dream house, white picket fence optional. Today, that piece of California real estate is known, quite inappropriately, as Dictionary Hill.

I'll be the first one to admit that kids today have more sources of knowledge and information than even the most rabid futurist of my time ever dreamed of or hoped for. Within minutes, protesters killed in Syria can be seen on YouTube; seconds after an earthquake struck the Eastern Seaboard, we knew where it had happened, how deep it was and how strong...not to mention seeing the barn near the epicenter on Google Earth using latitude/longitude coordinates from the USGS; and on webcams we could watch the scurrying lunchtime crowds in Washington DC.

But, at the same time there's so much information, too much information. And what's the point of it, the value of it? I think that's what has really changed, more drastic than the actual disappearance of encyclopedias from the American home -- the devaluation of knowledge. When a good set of encyclopedias was the apex of generalized self-learning, that information was valuable, and not just so you could be a show-off, but so you could excel in scholarship. Knowledge may still be power, but not like it was then, in the same way that a hundred-thousand dollars then could buy much more than a million now. 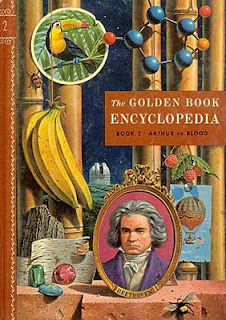 Don't look for encyclopedias to make a come-back any time soon. You'll see the rebirth of Disco, leisure suits and vinyl before you'll ever see another quality encyclopedia set published for home use -- no one would buy it, no matter how economical. Well, I would, because even today, with all your electronic gimcracks and gewgaws, every home still needs an encyclopedia. And don't ask about the sets I have -- they are not for sale.
Posted by Ralph E. Vaughan at 22:00