Some years ago, I presented an academic paper about the various ways in which the stories and short novels of fantasy writer H.P. Lovecraft (1890-1937) were interpreted in comic books and graphic novels, a project which resulted in the book H.P. Lovecraft in the Comics. The book received good reviews at the time, sold out quickly, and is now, unfortunately, out of print. 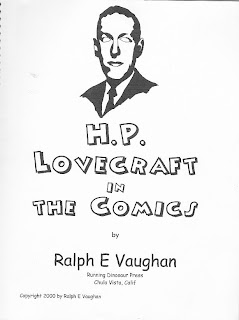 What I was searching for was the perfect graphic adaptation of a Lovecraft story, and to tell you the truth, I did not have high hopes. As a fellow bookaholic, you know exactly what I mean -- you read a novel, you see a film made from the novel, then go back to re-read the novel trying to wash the disappointment of the film from your mind. In other words, the book is always better, and I mean always. Well, nearly always. Ah, sometimes, very rarely, but sometimes, there are exceptions to that ironclad rule. We all have at least one film that in one way or another did not trash the book, a very personal choice. I had the same experience with comic books; after going through comic after comic purporting fidelity to Lovecraft, his plots and his philosophies, I finally came across a comic that was spot-on in every respect: The Dream-Quest of Unknown Kadath by Jason B. Thompson. 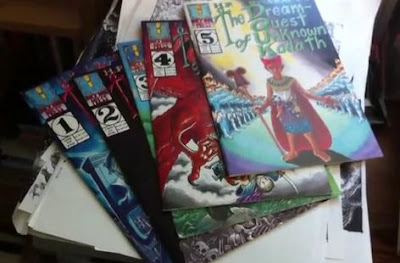 The epic quest of Randolph Carter for the lost city of his dreams was depicted in a mini-series of five comics, published by Jason's Mockman Press. The artwork, though in black and white, was dazzling in both its execution and its detail. It was quite possible to gaze upon a scene in a waterfront tavern or one set aboard a pirate galley and never quite penetrate all the levels of dimension or depiction; there was always some detail which existed at the periphery of  mind or memory. Anyone who had never read Lovecraft's great masterpiece would be motivated to do so; anyone coming from the novel to the comic would not be disappointed. 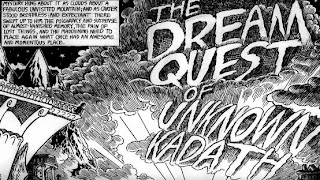 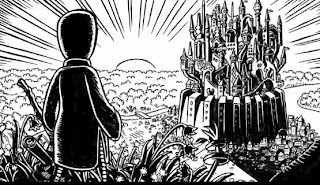 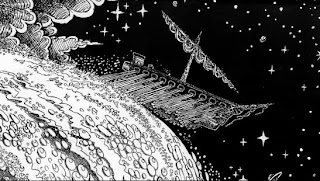 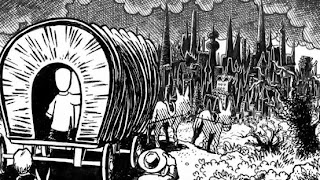 While some readers did complain about the "Mockman," the dream avatar of the Lovecraftian character dreaming in our workaday world, I found him to be an apt representation. The essence of Randolph Carter is the complexity and solidity of his dreamscape, and those attributes are vividly reinforced by the surreal and stylized figure of the "Mockman" running around the esoteric Dreamlands in his nightshirt. However we see ourselves in our own dreams, it is certainly not as we are, and Randolph Carter is no different. 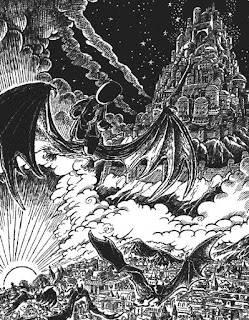 I was fortunate to meet Jason Thompson at the conference, surprised actually, probably more surprised than he was when he suddenly heard his own creation being touted by some geeky stranger as being the perfect embodiment of a graphic Lovecraft interpretation. Before Jason introduced himself to me, I really had not connected human artists and writers to the comic books I had evaluated for my project; in fact I had purposely blocked any connection in my mind, even going as far to turn down a chance to discuss some adaptations with the artist who had produced them. I did not want to "contaminate" my analysis of the work by meeting or corresponding with any of the subjects. I wanted my evaluation to be as "pure" as possible, consisting solely of the original Lovecraft story and the comic as a solitary object; often, I went through the story line by line, paragraph by paragraph, comparing the printed words, the prose descriptions on a frame-by-frame basis. 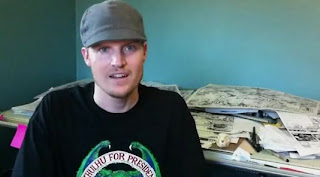 Of course, with the book completed, the paper presented and my brain frazzled, I felt it was completely safe to meet Jason and listen to him tell how he produced such a masterpiece. I think it was then, as he told me about the process of reading, sketching, planning, drawing, inking and laying out the panels, that I began to understand and appreciate all the work, inspiration, planning and determination that goes into bringing the imagination of the printed word into the graphic realm. I almost felt as if I might have been a little too tough on the artists, a little too judgmental. Almost. No, if you (as artists) want to play with a writer's toys, especially an iconic writer like H.P. Lovecraft, you had better be up to the task. No mercy from this reviewer. Fortunately Jason was up to the task, in spades. 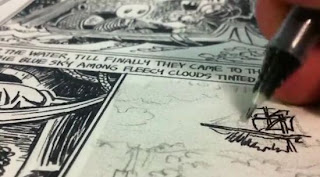 The reason this comes to my mind now is because of an odd series of events. Every once in awhile I find myself re-reading Lovecraft's The Dream-Quest of Unknown Kadath, which invariably leads me back to Jason's wonderful interpretation. This time, I had come across the novella in Damon Knight's 1973 anthology, The Golden Road. After reading the story, after reading the comics, I suddenly received a long note from Jason through my Facebook page, telling me of his latest project, asking for permission to use some quotes from my book on his "Kickstarter" page, through which he is trying to garner financial support. As if he needed permission! But I did appreciate his asking. It represented a level of respect and civility usually absent in today's world. I am very excited about Jason's latest Lovecraftian-related project, and if you are a fan of Lovecraft or the graphic arts I think you will be as well. If nothing else, please listen to Jason Thomson as explains his project, then make your own decision.