Run! The Martians are coming!

Today the Martians stopped by my house for a visit. I had not seen the leathery little devils in quite some time, not since their last attempt at world domination, so I was really quite pleased to see them, and we had a pleasant time, which will not end since the Martians decided to move in with me. As Nero Wolfe, a personage for whom I am at times mistaken, would have said, "Quite satisfactory!" My house may be crowded, but there is always room for more.

The Martians were transported over by my friend Charles, with whom I used to work at the Library. Charles and I have as much in common as we don't -- in a workplace of 800 people, we were the only veterans; we don't care for rhesus monkeys, rabid weasels or snakes-in-suits; we have no tolerance for fools; we both have a soft spot for the Insane Clown Posse; we both like weird films (his are far weirder than mine); and we both have a strong nostalgic bent. It was this last commonality that caused Charles to bring over the Martians. 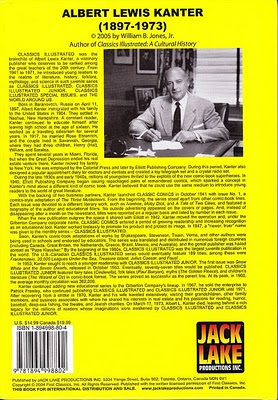 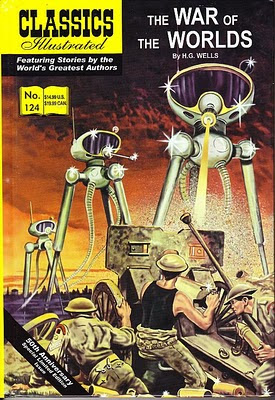 Yes, a comic book, of course. After all, it's not as if anyone visiting me is going to see a real Martian -- you need special glasses for that. But I digress. The gift was a special 50th anniversary reprint of Classics Illustrated No. 124: The War of the Worlds By H.G. Wells. Originally published in 1955, the comic appeared at a time when American society was down on comics...had a Comic-Con been held at that period of history, it would surely have been raided by the FBI, the Vice Squad and the House Committee on Un-American Activities. Classics Illustrated tried to legitimize comics and introduce kids to classic literature, and was the brainchild of publisher Albert Lewis Kanter, who is profiled on the reverse of the reprint.

For millions of kids, Classics Illustrated provided a doorway into a world of great literature. Most kids didn't even realize they had passed through that doorway; all they knew was that they were reading comic books that had great plots and interesting characters...the lack of tights, masks, capes and superpowers was nary a problem, certainly not when the stories kept you turning pages like crazy. Though I dearly loved The War of the Worlds, I must admit my two favorite Classics Illustrated issues were Jules Verne's Off on a Comet and Victor Hugo's Toilers of the Sea; and I also read and re-read another Wells tale: Food of the Gods.

I was quite touched that Charles gifted this book to me, as I have very fond memories of the comics published by Classics Illustrated, this issue in particular, which I read prior to seeing the George Pal film, but after reading the book. Although the book and the film had a particular impact on me, there's just something about reading a comic with a flashlight in the dead of night that makes the idea of Martians lurking in the shadows, or under the bed, quite believable...and probable. 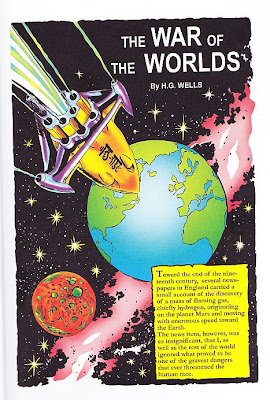 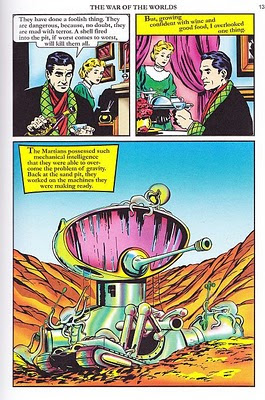 The artists, editors and production people at Jack Lake Productions Inc., did a wonderful job in restoring the art and text of The War of the Worlds. Even though this edition is printed on much better paper than a comic book publisher would ever have dreamed of in 1955, with the resulting increase in color quality and clarity, the artwork still retains the flavor of the times, before artists convinced themselves they were the stars and that it was absolutely necessarily to depict not only every muscle in the human body but a hundred more muscles that don't really exist in an actual torso. The permanence of hard covers, enhanced artwork, and special articles about Classics Illustrated and its creators -- superior to the original. 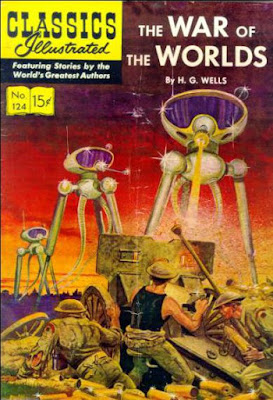 Still, as good as the commemorative edition may be, the original still outshines it, even a fifty-year-old copy that looks as old as it is. The smell of the paper, the stark power of the artwork, the impact of seeing it for the first time...can't beat it. Oh, and there's one more thing: the reprint cost $14.99, and the original only 15 cents; on the other hand, the reprint was a gift (Thanks, Charles!) and 15 cents was a fortune.
Posted by Ralph E. Vaughan at 22:08