An Encounter with the Borderland

"The House on the Borderland (1908)—perhaps the greatest of all Mr. Hodgson’s works—tells of a lonely and evilly regarded house in Ireland which forms a focus for hideous other-world forces and sustains a siege by blasphemous hybrid anomalies from a hidden abyss below. The wanderings of the narrator’s spirit through limitless light-years of cosmic space and kalpas of eternity, and its witnessing of the solar system’s final destruction, constitute something almost unique in standard literature. And everywhere there is manifest the author’s power to suggest vague, ambushed horrors in natural scenery. But for a few touches of commonplace sentimentality this book would be a classic of the first water."
-- H.P. Lovecraft,  Supernatural Horror in Literature 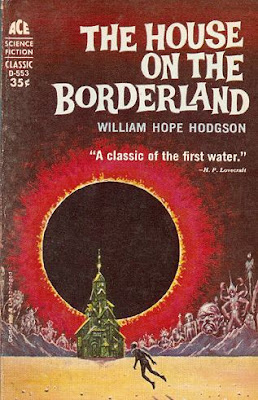 It's sometime in the early 1970's, I've taken another of those solitary jobs that allow a college student plenty of time to  study or write -- this time, a night watchman at a construction site beyond the back of beyond -- and I've found an Ace-published book entitled The House on the Borderland, and, as it turned out, it was probably not the best choice of reading material. The author, William Hope Hodgson, was new to me, but  seemed to be endorsed by H.P. Lovecraft, a writer I encountered about a decade earlier. Even though I knew nothing about Hodgson, I knew he was not a current, or even a recent writer, seeing as how Lovecraft died in the late 1930s. Later, during a flurry of pre-computer literary exploration I discovered the book was written in 1905, just twelve years before the author died during the Great War; it was also when I started accumulating ("I have that title, but not that edition"), much to my pocketbook's loss. Of course, now that we live in the age of infernal computers, you don't have to even buy the book to read it:


The story of The House on the Borderland is deceptively simple. In the year 1877 (Hodgson's birth year), two Englishmen, Tonnison and Berreggnog, are on holiday, tramping in the wilds of Ireland, fishing near the village of Kraighton (near where Hodgson's  Anglican priest father was once posted), when they come upon the ruins of a solitary house perched above a vast chasm. They find an old parchment diary bound in leather, water-damaged in places, but the spidery handwriting is still legible, and the remainder of the book consists of the men reading it to each other. The old man who lived in the house before its ruination is unnamed, so is known only as the Recluse. His only companions are his sister, Mary, who is his housekeeper, and his faithful dog Pepper. The diary entries recount intrusions of other dimensions into our own, and the slippage of  the Recluse into other realms of existence, such as the Arena under the Black Sun surrounded by representations of Gods Known and Unknown. It is this aspect which was rather faithfully captured on the cover of the Ace Books edition. 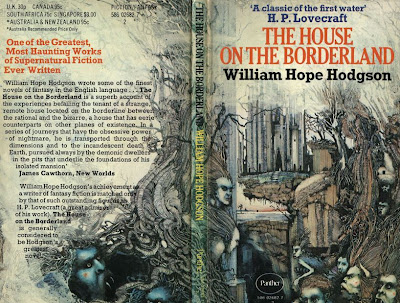 The wraparound cover by British publisher Panther captures the moment of the diary's discovery by the Englishmen, as well as the lingering menace of the haunted region, the brooding atmosphere. Hodgson has no shortage of atmosphere in this book.

As I read read the novel in that lonely work site,  surrounded by miles of darkness, with the wind and distant animal sounds letting me know just how alone I was, the skill of Hodgson's narrative power assaulted me. It was easy to forget I was reading a book, easy to forget what I read was a secondhand account by two fictional characters of an equally fictional Recluse; sinking into the book as into quicksand, I had the illusion the words might be my own, and the weird experiences as well. Avid readers know well this feeling of getting lost in a book, but, as with everything, there is a proper time and place. 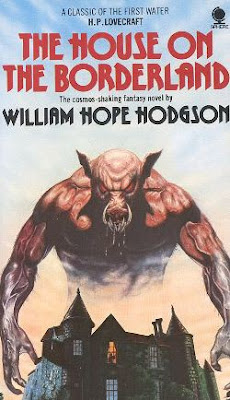 The eerie other dimensions to which the Recluse is transported have their terrors, particularly the savage monsters found in the Pit, vicious swinish creatures that continually assault the defenses of the House on the Borderland. Sphere, another British publisher, chose a representation of one of the deadly and enigmatic beasts for the cover of its edition. While it is not a bad likeness based upon the Recluse's descriptions, it is, perhaps, a little...tame.

The House itself almost becomes a character, a bit in the same way Poe's House of Usher becomes a character in sharing a fractured soul with doomed Roderick Usher. When the Recluse bought the house in (apparently) the 1700s, it was already old and possessed a bad reputation. The habitation of the Recluse, however, moves the manifestations beyond the realm of provincial ghost stories, triggering a cosmic breakthrough. The House goes from merely being poised between this world and others to being an actual gateway, and the thing about gateways is that they don't just swing one way. And the House seems to develop a consciousness. Because of age and water damage, the found manuscript is full of lacunae, and because it's a personal document, it's necessarily unfinished. However, Hodgson uses these lapses to great effect, hinting at vast cosmic mysteries and the pains of long lost love.

The House on the Borderland is not a lengthy tome, and at 650 wpm (ah, the joys of youth) I was able to read it in a single sitting. And then it was time make my rounds, to circumnavigate that cold and lonely work site, surrounded by walls sheer and unfinished, by skeletal buildings, by massive shadowy machines that seemed to lurk in ambush; the darkness pressed close, like a solid choking fog. Yes, when one is alone, there are books to read and books not to read, lest fiction and reality mingle...as if one were caught on the borderland. I should have studied the Calculus that night.

Email ThisBlogThis!Share to TwitterShare to FacebookShare to Pinterest
Labels: cosmic fiction, HP Lovecraft, other dimensions, The House on the Borderland, William Hope Hodgson