If you read any science fiction at all during the 1950s & 1960s, you've seen the astonishing work of artist Richard M. Powers (24 February 1921 - 9 March 1996). His style was arresting and unique, and he was allowed freedom of expression and design by publishers -- particularly Ian Ballantine -- such as was no other artist. So stunning was his work that he shaped the world of mass market paperbacks for more than two generations, and inspired both writers and other illustrators. If Powers is less known today than he should be, it's possibly because publishing is less individual in nature now and more corporate; also, although there is still a strong following for surrealism among collectors, those who purchase mass market paperbacks have been so bombarded by photo-realism and photography they won't respond to anything else. 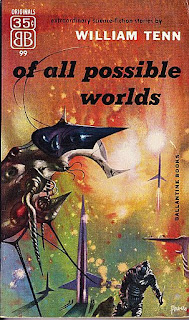 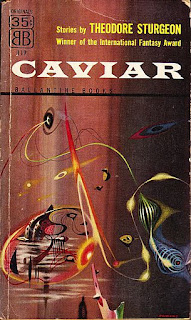 My encounter with Richard Powers was years ago at an American Booksellers Association convention, where he was empaneled with science fiction writers and artists. I had been invited to cover the event for a small trade magazine I then edited. I wanted to meet the artist I had admired for such a long time, as well as writer Larry Niven, another member of the panel; as far as the other artists and writers scheduled, they could come if they wanted, but I had no strong feelings, one way or another. But those two, yes, very much, and, honestly, Powers more than Niven, for I had met Niven before, and would again. 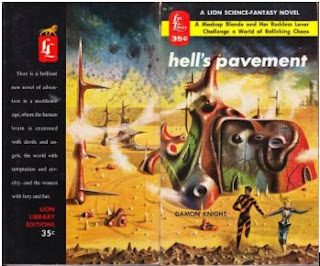 What brings Richard Powers to my immediate attention after all these years is a recent acquisition of first edition paperbacks. The scans on this page are some of the treasures that found their way to me. One of the innovations ushered in by Powers was the use of both the cover and back of the book to showcase the artwork. A case in point is this wraparound art for Damon Knight's Hell's Pavement, published in 1955 by Lion Books. As you can see, one of Powers' fortes was conjuring landscapes that were alien in the extreme. There is a certainly irony in this as the uncle who mentored him was a landscape painter, though painting billboards put bread on the table Richard Powers received formal training at the University of Illinois' School of Fine Art. After a stint at the Army Signal Corps' studio in NYC during WW2, he studied under New England artist Jay Connaway, a painter known for landscapes and seascapes, and I think we see something of that influence in this full cover wraparound for the Ballantine edition of Out of the Deeps (1953) by John Wyndham, a British writer more famous for his novel Day of the Triffids (1951), which was made into an okay film in 1966 by Allied Artists and a better serial by the BBC in 1981. Ballantine gave Powers full control over art, design and typography, to stunning effect. 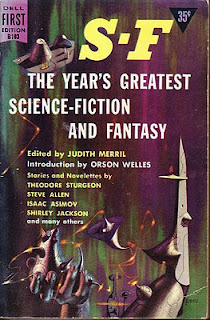 The panel discussion at the ABA convention took place before a large audience, mostly science fiction enthusiasts, as well as a smattering of publishers, writers, artists and distributors. Now, 1990 seems so very long ago, and a different world, not just for the end of the Cold War and apartheid, or the start of the Gulf War and the IMDB, but in science fiction as well -- Ballard published The Atrocity Exhibition, and the now-raging sub-genre of steampunk got a big boost with Gibson's & Sterling's The Difference Engine; giants like Silverberg, Pohl, Leiber and Le Guin were experiencing new heights of popularity; and Powers was back from Jamaica, where he had lived since the late 1960s, after the death of his wife, concentrating on gallery work. When the subject of book cover art arose, discussion inevitably turned to styles, motifs and trends. When Powers drew upon his vast and protean experiences in publishing, one of the younger artists remarked that times, tastes and standards had changed, which was why Powers' work was no longer popular. Powers took the affront with grace and wit and did not break the whelp's nose, and I was too far away to throw anything. Later, privately, when I asked about it, Powers just smiled shyly and shrugged. 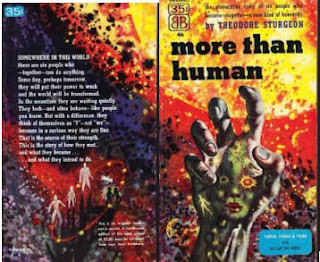 This cover for Theodore Sturgeon's More Than Human (1953) is another example of Powers taking full control of the publishing process, creating a full wraparound cover, designing the typeface for the title and author credit, as well as creating a "void" in the art on the reverse so the description of this novel of human mutations can be displayed in white print. The main portion of the painting is extremely dramatic and a close examination reveals that many of the novel's thematic elements were incorporated with various levels of subtlety on and around the gripping right hand. Of all the publishers with whom Powers worked, Ian Ballantine was the most permissive, and the more freedom he was given, the more liberties he took.

Although Powers eventually returned to providing covers for some paperback books in the 1970s & 1980s, most of his work was for better paying companies such as Easton Press, and in some instances he convinced publishers to use paintings he had previously created for gallery sales as covers for hardbacks. He also provided work for periodicals, record albums (and compact discs), comic books, advertising, brochures, collectible plates and porcelain figures, calendars and convention guides; and his original paintings are still very popular in gallery sales and auctions. He was fully employed and vitally involved in art and publishing right up to 1996, when he died from an aneurysm. 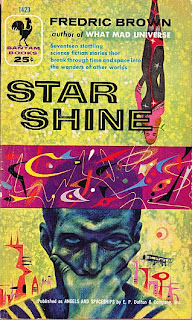 It was a real thrill listening to Richard Powers talk about his long career and the many people he had known, and the chance to meet and speak with him, however briefly, is really what sticks most in my mind about that trek to Las Vegas for the ABA convention. One thing I've leaned from a life lived in the pages of books is that it's generally very easy to meet an author; sometimes you can't avoid them, no matter how much you try (just surrender or commit harakiri if approached by the author of a self-help  or how-to-gamble book -- there's no escape), but artists are much more difficult to track down, especially the good ones. During Powers' paperback heyday, artists were never credited and were discouraged from leaving a personal mark on the art, so it's an indication of Powers' influence that a goodly number of his covers may be identified by the word "POWERS" placed discretely within the design.
Posted by Ralph E. Vaughan at 14:43